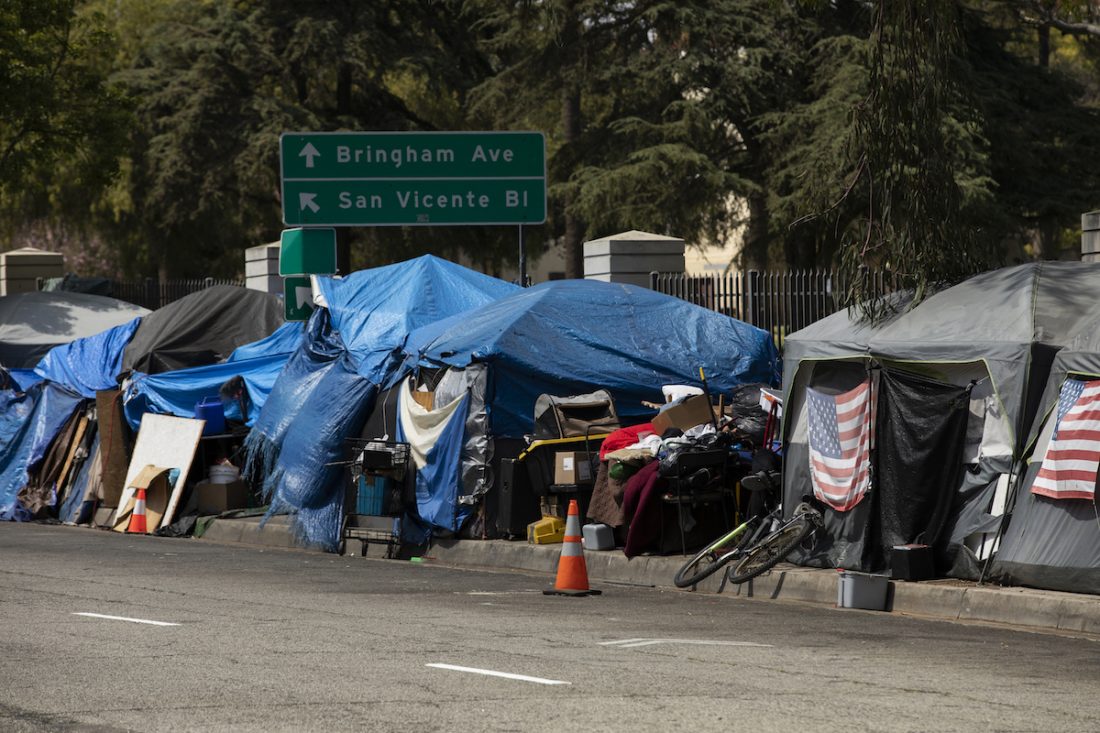 The Department of Veterans Affairs Secretary Denis McDonough has announced plans to place over 500 homeless veterans in Los Angeles, including those living along San Vicente Boulevard in Brentwood, into housing by the end of the year.

McDonough was visiting the encampment weeks after the second homicide in six months on “Veterans Row”. In April a man was arrested for killing an unhoused male veteran man with a vehicle. In September another unhoused male Veteran was killed in a stabbing.

McDonough did not provide details on how the housing initiative will be funded or where the veterans would be housed other than that some could go into transitional housing facilities on the VA campus.

The news comes weeks before the Los Angeles Sheriff’s Department (LASD) announced it will begin clearing the San Vicente encampment on November 1. LASD Homeless Outreach Service Team (HOST) is leading the clean-up, following a similar effort over the summer the agency carried out on the Venice Beach Boardwalk. LASD Lieutenant Geoffrey Deedrick, a leader of the HOST team, did not immediately respond to an email asking if McDonough’s announcement impacts the LASD clean-up effort.

The Brentwood Community Council (BCC) told the Brentwood News that it has no information as to whether the VA announcement will impact the LASD effort. The BCC did issue a statement applauding the effort, however, saying it will completely solve the problem.

“Fast, intensive action by the VA is welcome news and long overdue, especially after 2 Veteran murders within six months on San Vicente. We’re also grateful to the LASD HOST program for pushing forward to house homeless Veterans and return the County sidewalk to a safe, ADA accessible public space,” the BCC said. “However, VA action will not resolve the core issue that we had to call the Sheriff to get action for an encampment on County property, as County Supervisor Sheila Keuhl refused to implement an ‘Encampment to Home’ program for homeless Veterans on San Vicente, before or after the Covid crisis, nor will she bring forth a Motion to limit sidewalk camping near sensitive use areas, such as rehab centers, schools and libraries, similar to the City of Los Angeles.”

“LAHSA, LA County Sherriff HOST team, VA and community partners, with the support of Supervisor Kuehl’s office, have been actively working at the San Vicente encampment to provide resources and connection to housing for our unhoused neighbors for weeks.

Since late September, we have placed over 20 individuals from San Vicente into interim or permanent housing. We are encouraged that Secretary McDonough recognizes the urgency and unjust nature of allowing those who have served our country to languish on the streets.

To get this done, the Greater Los Angeles VA Medical Center needs to match the urgency and come to the table with an all-hands-on-deck, principles based approach, focused on innovation, and a commitment to intentional and intense collaboration with community partners who have been working at this site. The Secretary’s announcement of resources for 500 veterans is a great step forward, and we anticipate successful collaboration.”

“This is great news from the VA — if the federal government makes these promises real,” Bonin said. “The federal government itself needs to take a more active role in fulfilling its obligations, and we need to keep the heat on until they do. Our veterans have heard lofty promises before – and yet they are still left to live and die on our streets.”