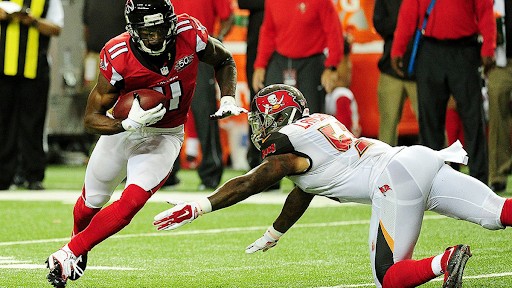 The Los Angeles Rams are sitting comfortably in a playoff spot with a 7-3 record, but that’s not satisfying enough for a team with Super Bowl aspirations.

Following Week 8, the Rams had a 7-1 record and found themselves in a tight four-way race with the Green Bay Packers, Arizona Cardinals and Dallas Cowboys for the NFC’s top seed.

But the Rams got very little going in their 28-16 home loss to the Tennessee Titans in Week 9. Eight days later, the San Francisco 49ers pummeled the Rams 31-10.

The Cardinals lead the NFC with a 9-2 record, and they currently hold the head-to-head tiebreaker on Los Angeles; the two teams will meet again in Week 14.

The Rams will try to get back on track when they visit Aaron Rodgers and the Green Bay Packers (8-3) on Sunday afternoon (4:25 p.m. EST). Green Bay opens as a 1.5 favorite for that game.

A loss would all but eliminate the Rams’ hopes of earning the top seed in the NFC, since the Packers would be two games up in the win column with the head-to-head tiebreaker.

Despite their mini losing skid, the Rams hold the third best Super Bowl odds at +800. Only the defending champion Tampa Bay Buccaneers (+550) and Buffalo Bills (+600) have higher odds right now.

The Rams had the best defense in the NFL last season, but they were no match for Rodgers and the Pack in the NFC Divisional Round matchup.

Rodgers completed 23 passes for 296 yards and two touchdowns, and even though All-Pro offensive tackle David Bakhtiari was sidelined, the Packers allowed zero sacks on the day.

Green Bay has more weapons now than they did then, namely Randall Cobb and A.J. Dillon. The L.A. defense has taken noticeable steps back this season, so it’s hard to envision them getting the necessary stops in this one.

Stafford and Cooper Kupp give the Rams enough firepower to keep this one close. But ultimately, Rodgers and a healthier Green Bay team will be too much. The Pack will hand the Rams their third straight loss.

After the Green Bay game, the Rams’ schedule gets a little more manageable. They should have no problem defeating the rebuilding Jacksonville Jaguars at home in Week 13, which would move them to 8-4.

Los Angeles will then visit the NFC-leading Cardinals. Arizona dominated the Rams 37-20 back in Week 4, but a McVay-coached team knows how to make the necessary adjustments against a familiar opponent.

Stafford protects the ball this time around, and the L.A. defense — which now has Von Miller in the fold — will do a better job of limiting the explosive play by Kyler Murray and company.

The Rams will salvage a season series split and keep their slim NFC West hopes alive.

The Rams’ defense should once again give Russell Wilson plenty of fits, and the Stafford-Kupp combo will expose a lackluster Seattle Secondary. McVay’s Rams  will get past Seattle and move to 10-4 with three games to go.

After that, the Rams will visit the suddenly red-hot Minnesota Vikings, who find themselves back at .500 following a 1-3 start. Kirk Cousins is having his best season yet, but unfortunately for him, the Rams’ defense matches up very well with this Minny offense.

Jalen Ramsey is one of the few corners who can make Justin Jefferson a non-factor in a game. The Donald-Miller duo should do more than enough to limit Dalvin Cook and Minny’s high-powered rushing offense.

The Vikings also don’t have the corners to match up with the Rams’ big-play receivers. This should be a thrilling back-and-forth contest, but L.A. will barely escape with a fourth consecutive victory.

Afterwards, the Rams will travel to Baltimore to take on another Super Bowl contender in Lamar Jackson’s Ravens. Two years ago, Baltimore crushed L.A. 45-6 on Monday Night Football, putting a massive dent in the Rams’ playoff hopes.

This year, the Rams don’t have the personnel to fully slow down the Ravens’ dynamic rushing game. All-Pro corner Marlon Humphrey should be able to handle Kupp, too.

The Rams’ win streak comes to an end with a sloppy loss to the playoff-bound Rams. They’ll be 11-6 heading into the Week 18 finale against the 49ers.

San Francisco has won five straight against L.A. dating back to the 2019 season. But the Rams will be fired up and ultra-motivated to win in front of their home fans in a game with massive implications.

McVay and Stafford will be better prepared for the San Francisco defense following the Week 10 stinger. Donald, Miller and Ramsey will hold down the fort and help the Rams notch victory No. 12, which will clinch them the top wild card spot and No. 5 in the NFC.