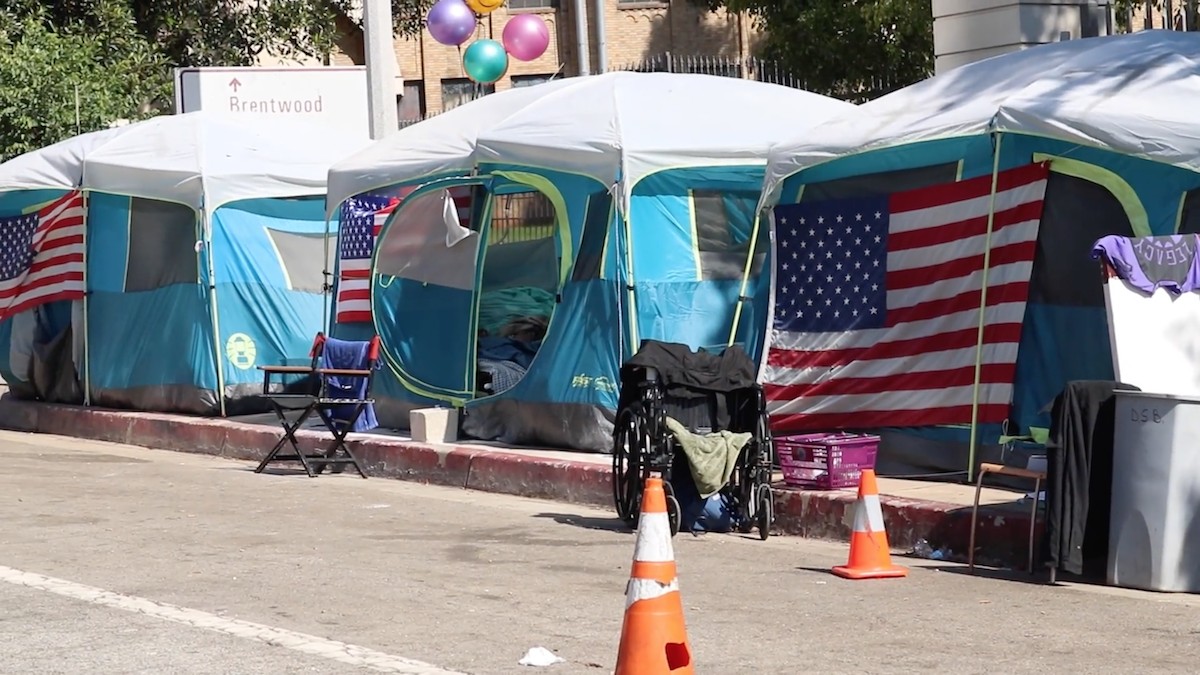 Efforts to clear the Veteran’s Row homeless encampment on San Vicente Boulevard in Brentwood have begun.

On Monday morning, deputies from the Los Angeles Sheriff’s Department, outreach workers and other officials–including L.A. Public Works Department– ​began the process of relocating the homeless outside the West Los Angeles VA. According to the Los Angeles Homeless Service Authority, most of the veterans are being moved into motels, with some moving into tents on VA property or directly into permanent housing.

“The VA, they’re committed to offering services around the clock,” Sheriff Alex Villanueva told reporters at the site. “They’re trying to get the staffing, which is a huge improvement … so that is a big help. So now, someone shows up here at 10 o’clock at night, odds are they’re going to be able to find a place to lie down, and it’s not going to be on the sidewalk.”

According to Villanueva, every Veteran living at the encampment has been connected to shelter placement, both on the VA itself and other locations in the area.

LASD Homeless Outreach Service Team (HOST) is leading the clean-up, following a similar effort over the summer the agency carried out on the Venice Beach Boardwalk. According to the Brentwood Community Council (BCC), HOST “transitioned 50+ Homeless Veterans into housing, treatment and transitional programs or arranged for family reunifications within two months.”

“Although 1 tent owner tried to return this afternoon, see below, the resident was met with offers of immediate homeless services and the tent has been removed. This process will continue when a new tent arises. One person is currently receiving intensive outreach and LAPD follow up after she moved to the bus stop on San Vicente, across from the encampment.” the BCC added.

Outreach workers, some of whom are formerly homeless Veterans, have been engaging with the Veterans living on San Vicente Boulevard since the encampment first appeared in 2015. For more than a year, U.S.VETS–the largest non-profit working to combat America’s veteran homeless crisis–has doubled its outreach efforts to help Veterans not only secure housing but provide the resources needed to ensure veterans get back on track. When the Sheriff announced the planned abatement of the encampment, U.S.VETS was tasked with housing at least 10 of the Veterans residing in the encampment. Since that directive, U.S.VETS says it has housed 13 Veterans.

“The West LA VA Campus is a sacred place for many of our Veterans,” said Stephen Peck, President & CEO of U.S.VETS. “We understand the deep connection Veterans have to the campus and are working hard to offer them safe housing options in our communities across Southern California. However, we’ll soon be able to honor the legacy of the West LA VA Campus by providing Veterans a home and community on that land which was promised to them decades ago.”

The cleanup comes shortly after Department of Veterans Affairs Secretary Denis McDonough announced plans to place over 500 homeless veterans in Los Angeles, including those living in Veterans Row into housing by the end of the year, following a visit to the encampment last month.

McDonough was visiting the encampment weeks after the second homicide in six months on “Veterans Row”. In April a man was arrested for killing an unhoused male veteran man with a vehicle. In September another unhoused male Veteran was killed in a stabbing.

McDonough did not provide details on how the housing initiative will be funded or where the veterans would be housed other than that some could go into transitional housing facilities on the VA campus.