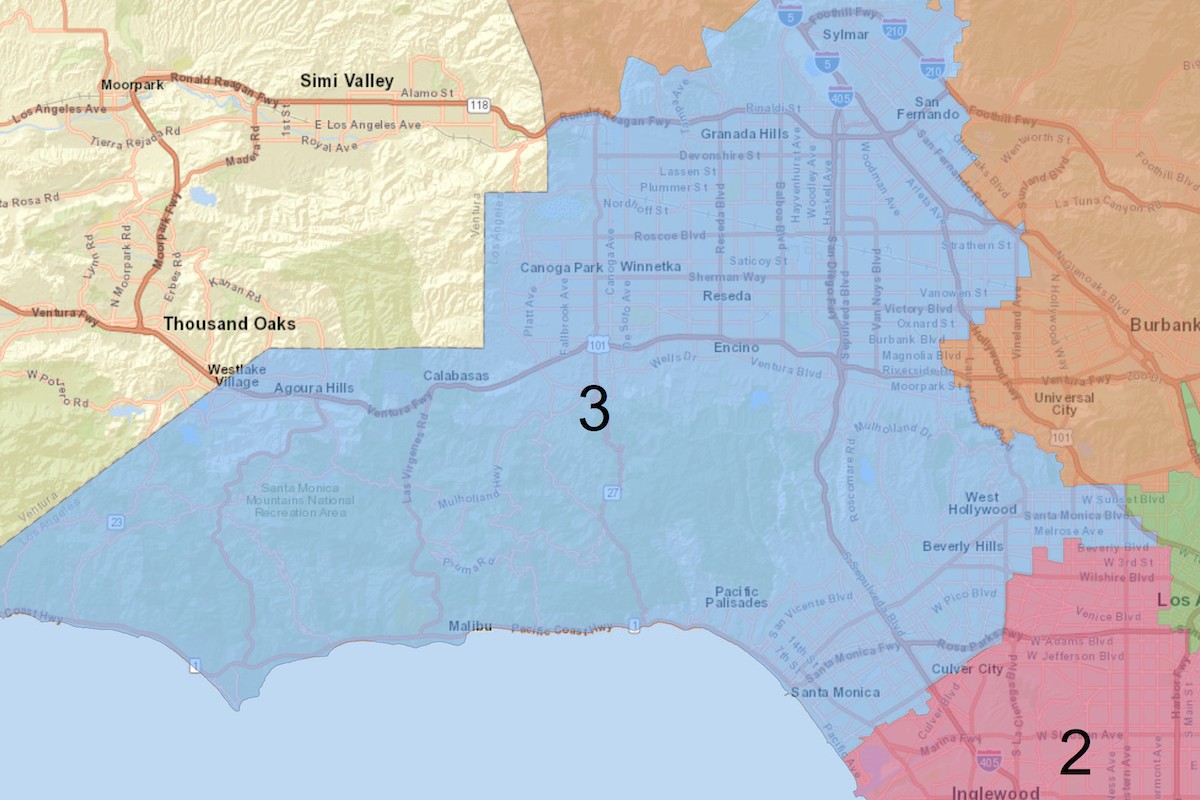 The new map, which went into effect December 16, adds Porter Ranch, Chatsworth and Granada Hills while removing Mar Vista, Los Feliz, the Southeast Valley and the Cahuenga Pass from the District.

LA County Supervisor of District 3, Sheila Kuehl was outraged over the changes and, in particular, was vocal about losing the artistic venues The Ford Theatre, The Hollywood Bowl, LACMA and Universal Studios which are now divided among Districts 2 and 5. Kuehl gave the commission a written statement that lamented the loss of these important cultural sites and said that she and her staff were “fierce advocates of the arts.”

Kuehl added that the process resulted in the “rushed adoption of a strategically manipulated 11th-hour map.” on her blog. Kuehl said that she believes that the map was reconfigured to favor two potential candidates for her seat because she will not be running for re-election. Supervisor Kuehl further stated, “the result of this last-minute marauding is that my District becomes far more centrist (as in, bye-bye any reform to our justice system).

“Two non-progressive men, middle-of-the-road Democrats who hope to be Supervisors, used the Commission to shape their own dream districts,” Supervisor Kuehl addedin, not disclosing the names of these men.

The candidates who are currently in the field for the District 3 seat are Assemblyman Richard Bloom, a former Santa Monica mayor and resident of the city and Ron Galperin, Los Angeles City Controller. State Senator Henry Stern immediately announced his candidacy for the seat a few hours after the map was approved. Kuehl’s office told the Santa Monica Daily Press that  “the comments were not an attack on [Stern].”

Stern, who made the announcement on a live stream, noted that he and Kuehl have “difference of opinion” on tackling homelessness.

“It’s a false choice to say you have to sacrifice a restorative justice system in exchange for more social workers on the street or more field psychiatrists,” Stern said during a live stream that kept cutting in and out. “I know there’s discontent. The current supervisor doesn’t think it’s fair that some communities are out, others are in, like more conservative parts of the north valley, or east valley are represented here…We don’t need to suffer from that. We don’t need to sacrifice our social justice agenda or our pragmatic kind of progressivism.”

According to The Daily News, Sen. Bob Hertzberg, who is the Majority Leader of the California state senate, is also  “seriously considering” running for the seat. It shoul be noted Supervisor Kuehl endorses West Hollywood Councilwoman Lindsey P. Horvath as her replacement.

The intent of the citizens redistricting committee was to make the redistricting process less political and take the task out of the hands of the County Supervisors themselves. The members of the committee were randomly selected on the first level and then chosen by auditors from the state board once they passed to the second and third levels of application and an effort was made to choose committee members who reflected the make-up of the city’s population in different areas.

The new map has added a second district that has a majority Latino population and made sure to keep the Asian population and Black populations grouped together in their districts rather than splitting them apart. The other reason that the committee was created by the state legislature is to give Latino and Asian candidates a better chance at being elected to office in the hope that an independent, citizen led committee would resist the urge to gerrymander the districts.