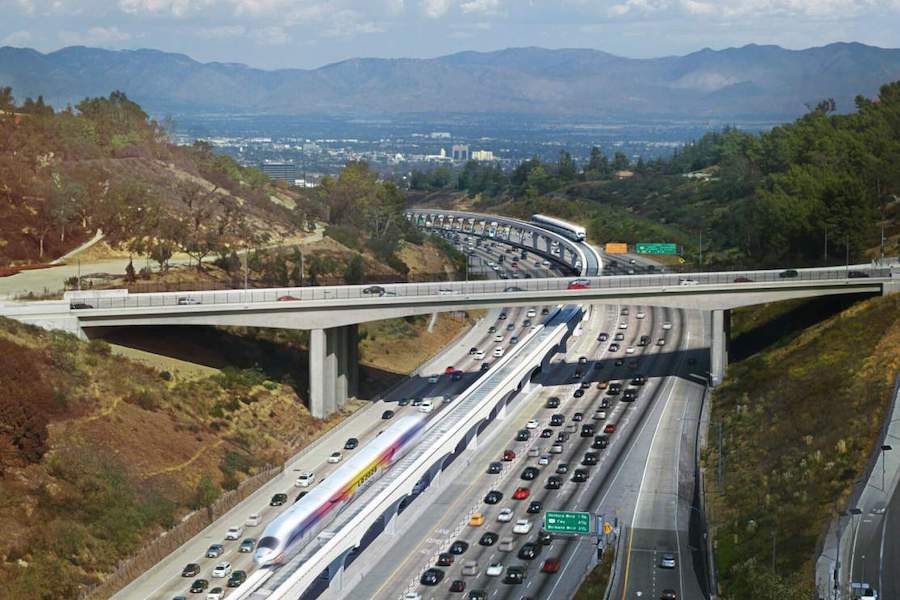 Metro Los Angeles has opened public comment during the Environmental Review Phase of the proposed rail line that would connect the San Fernando Valley to the Westside through the Sepulveda Pass and eventually connect the areas served to LAX.

The draft of the Environmental Impact Review for the project has been released and you can review the proposed rail lines, both heavy rail and monorail options, and lend your opinion to Metro on the subject and choose the one that you think would suit the situation best.

If you would like to learn more about the options, Metro Los Angeles has set up three virtual meetings online through Zoom:

Of the six options available, three are heavy rail and three are monorails.

Option One: Automated monorail that would be entirely aerial along the 405 corridor and the Metrolink Ventura County Line railroad tracks with an electric bus shuttle to UCLA. The monorail would originate from the Van Nuys Metrolink station and terminate at Expo Sepulveda Station. The trains could have between two and eight cars, with six cars the normal length during peak hours. Cars would hold 76 to 79 passengers each. The tram would run 15.3 miles and have eight aerial stations at Expo Sepulveda, Santa Monica, Wilshire, with a D line transfer, Getty Center, US 101, G Line Sepulveda Station, Sherman Way, and Van Nuys Metrolink Station. It would connect to UCLA through a separate electric shuttle bus at Wilshire Station.

This option is  identical to Option One except that the connection to UCLA is an automated people mover. A pedestrian bridge would run from the monorail station on the south side of Wilshire to an aerial Automated People Mover (APM) station on the north side of Wilshire. The APM would travel on a structure primarily along Gayley Avenue to an aerial station near the west end of Bruin Walk on the UCLA campus. The people mover would operate at the same frequency as the monorail.

Alternative 3: Automated monorail with aerial segment along the 405 corridor, an underground segment between Wilshire and Getty Center, then entirely aerial along the 405 and Van Nuys Metrolink Line railroad tracks.

This alternative is similar to the first two options, the difference being that it has an underground segment to connect to UCLA and is slightly longer because of it at 16.3 miles. The additional station at UCLA would be an underground station.

The first heavy rail option has almost all the same stations, there would be no stop at the Getty Center, and the same starting and ending points as the monorail options, but has fewer cars that can hold more people, normally each train would have three cars that could hold up to 170 people each. The train could attach an additional car if needed. Train frequency would be slightly slower at 2.5 minutes during peak hours. The train route would be a total of 14 miles and the line would go underground between the E Line and a portal south of Ventura Blvd in the San Fernando Valley. North of Ventura Blvd, the route would generally be located on an aerial structure above Sepulveda Blvd and the Metrolink Ventura County Line railroad tracks.

Alternative 5: Heavy rail with underground segment along Sepulveda Boulevard and an aerial stretch along the Metrolink Ventura County Line tracks in the San Fernando Valley.

This option is very similar to Option Four, the difference is that the alignment along Sepulveda Blvd is also underground, and the only aerial segment is along the Metrolink Ventura County Line railroad tracks. The connection to UCLA would also be at an underground station at Gateway Plaza.

Option 6: Heavy rail that would be entirely underground including along Van Nuys Blvd in the San Fernando Valley and with a southern terminus station on Bundy Drive next to the E Line on the Westside.

This option is the one that differs the most from the other heavy rail options. The line terminates at Expo Bundy instead of Expo Sepulveda. Peak hour frequency is every four minutes rather than two minutes. Train capacity is two, four or six cars and are expected to consist of six cars during peak periods, with each car having a capacity of 133 passengers. The route is 14.6 miles with the segment on the Westside running generally northeast between the E Line Expo/Bundy Station and the UCLA campus. The segment in the San Fernando Valley would follow Van Nuys Blvd. This option would have seven underground stations at Olympic Bl (Metro E Line), Santa Monica Blvd (West LA Civic Center), Wilshire Blvd (Metro D Line), UCLA’s Gateway Plaza, Ventura Blvd, the G Line’s Van Nuys Station and the Van Nuys Metrolink Station connecting to UCLA at Gateway, as usual.

The Sepulveda Pass Rail Project was partially secured through the passage of Measure M which is a transportation sales tax. In March, Metro Los Angeles approved contracts for two teams to develop these possible rail lines. LA Sky Rail Express, which is a team that includes John Laing, Skanska, BYD, Gensler, HDR, ACI and Innova, are working on the proposals for aerial monorail options and Sepulveda Transit Corridor Partners, which is a team that includes Bechtel Development Company, Meridiam Sepulveda and American Triple I, has been working on the proposals for heavy rail options.