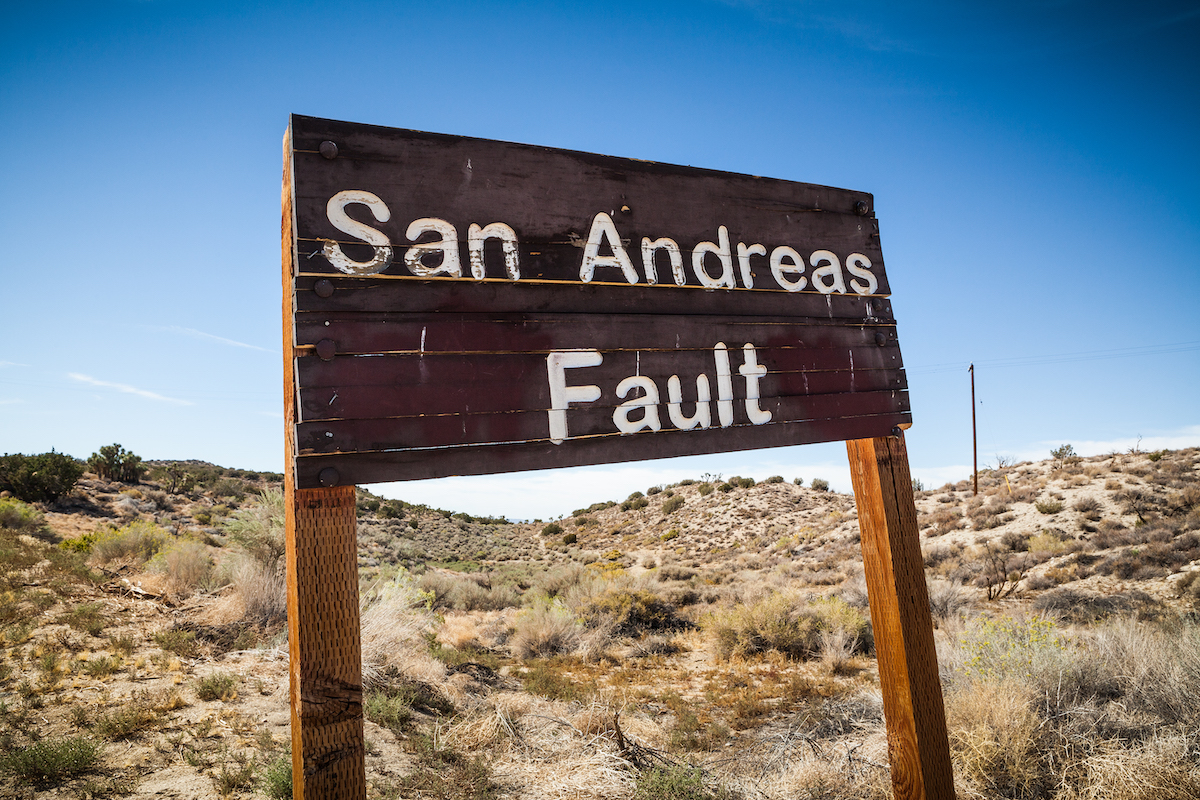 This is a two-part article

Two large tectonic plates are engaged in a titanic multi-million year battle to slip past each other. As the northbound Pacific Plate slams into the North American Plate along the San Andreas Fault, mountains are created on both sides of that fault. On the Pacific side, the Santa Monica Mountains and San Gabriel Mountains are squeezed upward, while on the North American side the Sierras and the San Bernardino Mountains are also squeezed upward where the two plates collide. In effect we are riding northward at a blistering 1”-2” per year pace past Palmdale. But it’s not been a smooth ride because both horizontal and vertical plate movements happen in jerks and starts, which we experience as periodic earthquakes. Earthquakes occur along fault lines because that is where the relative movement occurs between different landmasses. In our area earthquakes occur along both the long San Andreas Fault (think San Francisco 1906) and a myriad of shorter faults (Newport Inglewood,  Hollywood, Palos Verde, Puente Hills, etc.) that are essentially acting more or less parallel to the main one.

How often do big quakes hit in Los Angeles?

Cith about a century of modern instrumentation and record keeping we can see that in Southern California periodic large earthquakes occur irregularly about every 11 years:

From this simplified chart we can also see that Santa Monica has been extremely lucky in two ways. First, the larger (above 7.0) most dangerous recent Southern California earthquakes have all occurred far from the metropolitan  core of the Los Angeles basin and second we have not had a dangerous (6.0+) quake nearby in the last 27 years since the Northridge earthquake which many of our readers have personally experienced. There are three additional considerations that can help our seismic understanding. First, the strength of earthquakes is logarithmic in that each increase of one represents a quake that is ten times stronger.  For example a quake rated at 7.0 is 100 times stronger than one rated at 5.0. Second, the longer the fault, the more potential it has for a larger earthquake. And third, generally speaking, absent perverse soil conditions, distance reduces danger. As you can see from the chart, the death rate from large quakes in sparsely populated areas is much less than weaker nearby quakes.  Even if a large (the Big One at 8+)  earthquake happened along the long San Andreas Fault in Palmdale (55 miles away), it may not do as much damage to Santa Monica as a closer 6.4 earthquake on the shorter Newport Inglewood Fault in Long Beach which is 25 miles away.  That fault, for example, destroyed Santa Monica’s high school 88 years ago.

Finally, new faults are being discovered all the time as engineers and geologists get a better understanding of the basin’s complex geology. For example the Puente Hills fault was only identified in 1999. Thus, it’s a virtual certainty in our complicated geology, that there is some as yet undiscovered fault (or a connection between two seemingly separate faults increasing their length hence their danger) somewhere in the LA basin. And that such a new fault might be capable of, depending on its discovered length, a potential 6.5 earthquake.

Yes it is our fault

Our nearest fault is the Santa Monica Fault which runs from Beverly Hills/Hollywood along Santa Monica Blvd and goes offshore to Malibu and beyond. It represents the geologic boundary between the Santa Monica Mountains and the Los Angeles alluvial basin. The center of that fault’s run is rather confused. Starting at Santa Monica Blvd and Centinela it seems to split into a fan of three (or more) short westward fault segments that have spread to about a half mile in width when this fault complex enters into the ocean at Santa Monica Canyon. Notice this “fan” covers a good part of our Mid-Wilshire core with many large buildings. Fortunately our two regional hospitals are just outside of this fan but certainly in the seismic risk area.

The good news is that this Santa Monica fault seems to be rarely active, from our current understanding, moving only about every 1000 to 8000 years. So given that large probabilistic spread, it could move tomorrow, but most likely it’s a lower nearby risk to our City compared to the many other nearby repeat offenders such as Newport Inglewood Fault that keep up a steady drumbeat of daily small  quakes that may soon result in a big quake.

Can we predict earthquakes?

The predictive science of earthquakes is not yet advanced enough to tell exactly when a quake will occur on a given fault, not to mention the ones we don’t know about. But the increasing 200+ year historical record plus massive geological borings, modeling and mapping gives us credible belief that a quake of a certain size will certainly occur along a specific fault every X thousand years. So while we don’t have a date certain, when a particular fault may move,  we have probabilistic certainty to help us assess risk over a long period of time.

Paradoxically, once a quake starts, in one location, we have a predictive certainty  for nearby areas because earthquakes generally create two types of seismic waves that travel at different speeds:  P (primary) waves arrive first, while  S (surface waves) travel about 1.7 times slower. The S waves are the ones that do the damage to buildings because they travel on the ground surface similar to a wave on the ocean. The ground surface actually moves up and down and horizontally just like a wave in water. The State of California is deploying a net of sensors to pick up the first P waves from a quake which can then advise, for example your cell phone, that S waves are on their way and will arrive say 40 seconds later. This interval of time to react will allow people to avoid tall objects, to leave buildings, to pull off the road, to get off ladders and to take other defensive measures. Again distance from the source earthquake fault provides safety since it increases the time interval which people will have to react defensively when the fully developed and deployed sensor system sends its urgent quake notification broadcast.

Given the probabilistic spread of earthquakes over thousands of years, there’s no such thing as being “overdue” for a large earthquake from a given fault. The pattern is too random and irregular for our current knowledge. Its like trying to predict exactly when a certain car will break down. However, with enough cars driving you can be certain that approximately X number of cars will need to be towed every year. Likewise, in Southern California we don’t know, with our current knowledge, when a certain fault will create an earthquake. But the statistical aggregate of the dozens of faults in the basin, with their respective histories, lets us know with a high degree of confidence that we are “overdue” for a  large (6+) somewhere in Southern California. In the last 77 years we have had 7  6+ earthquakes or about one every 11 years. The smallest interval, in our admittedly small sample, between  large quakes has been 2 years and the largest interval has been 21 years.  The last large one was in 2010, and that was 11 years ago: exactly at the statistical average for the next one.  Therefore, we are now in the statistically highly probable zone going forward that we can expect a large earthquake soon.

Next Week’s SMart Article will address how to get ready for our next big quake.