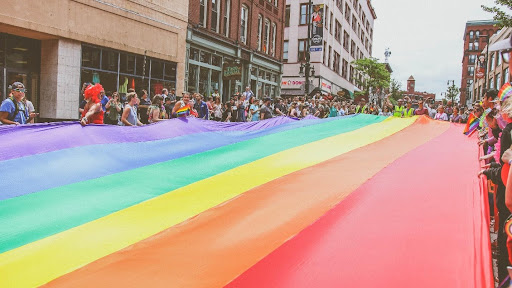 “The Gay Agenda” was a term taken seriously for far too long by those with reservations about the “gay lifestyle,” an equally inane term. It becomes comedy when you consider it literally. Picture the scene: Flamboyantly dressed men, women, and people of indeterminate gender sit around a rhinestone decorated table as this gay cabal discusses their plans. “So, it’s agreed,” some overlord lisps, “Men in speedos and women with short spiky hair shall set forth across the lands, going door-to-door with the gay news; converting whom we can and harassing those we cannot. All shall bow before the gay lifestyle until the gay agenda’s final goal is reached – the extinction of the human race!! Bwahaha!”

Yes, young people, that’s the kind of silliness those of us old enough to remember had to sit through; when same-sex marriage looked like something we’d achieve perhaps a few decades after we’d colonized Mars. And yet, here we are. It’s 2021 and after the long Covid night, a gay (as in “happy”) day has dawned. Pride Month 2021 might perhaps be the best ever… and for a surprising reason: basic gay rights are finally being seen as “normal” by a majority of Americans for the first time. This includes Republican Americans! – Some 55% of those who support the GOP told the most recent Gallop poll that they’re cool with marriage equality; not a huge majority to be sure, but hey, it’s progress. Overall, around 70% of Americans have come to feel comfortable with their LGBTQ+ neighbors having the same rights as they do. And that’s something to celebrate – hopefully with some serious fun this month. It’s gonna be quite the party as folks emerge from literal home office closets and rejoin the world – mask-free, finally meeting the people we’ve been chatting with on dating sites over this last ‘year of the  lockdown’ – Click for more info on the top ten gay online dating app players; it’s a cool list.

It seems undeniable that the 2015 court-ordered legalization of same-sex marriage in the United States helped increase these newfound levels of acceptance reported by Gallop. When the polling company first started asking people, “Do you support allowing two people of the same sex to wed?” back in 1992, the total percent of ‘yes’ answers was a mere 27 percent. Now, 84 percent of young adults, 72 percent of middle-aged adults, and 60 percent of older adults are in favor of same-sex marriage, with some holdouts apparently noticing that the world didn’t end when Adam and Steve said “I do.”

But it should be noted that the change was court-ordered. In fact, there are two stories of marriage equality from two sides of the world that are equally instructive. The U.S. Supreme Court ruled all states must recognize same-sex marriages in 2015. On the tiny island of Taiwan, half a world away, in 2017 the Constitutional Court gave lawmakers there two years to figure out how to amend laws to permit same-sex marriage after ruling a ban violated the constitution. In May 2019, same-sex wedding bells began to legally toll – and this on a conservative, culturally Confucian Island of 23.5 million people, a few hundred miles from authoritarian communist China. Taiwan became the first place – and so far, only place – in East Asia to grant equal rights; although it is hoped nations such as Korea and Japan may soon follow Taiwan’s lead.

Just two-plus years since the Taiwan court-mandated decision, 60.4 percent of the island’s people support marriage equality – up sharply from the 37.4 percent who said they did so in 2018. Could the change in attitudes seen in both the U.S. and Taiwan mean that the majority isn’t always, right? –Damn straight it does! Waiting for the bulk of the masses to become more open-minded and give up deep-seated bigotry might work in a few near-utopian liberal states; but in most places, it’s likely going to take a court saying, “Sorry. You can’t claim to treat all citizens equally and deny consenting adults of the same gender the right to marry. The word ‘equality’ doesn’t work that way.” Sure, it’ll be a tough sell in the beginning. The Japanese or Peruvian justices who make such a ruling will get hate mail or worse. Religious leaders will condemn them. “Traditionalists” will call for their removal. People will scorn them. But – not that it’s much consolation in the near term, but long-term it’s an awesome legacy – these ultimate deciders of law will be on the “right side of history” and their names will live on as examples of courage and honor.

As we celebrate a wonderful wild Pride Month 2021, let’s not forget the millions who are still chained to illogical, backward-thinking systems that somehow see love as a threat. From Peru, a nation that sits next to other Catholic-majority nations with marriage equality laws but has yet to see the light, to Russia, where equality may actually have to wait until Elon Musk’s grandchildren colonize Mars; we’ve come a long way, baby – but there’s still a ways to go.