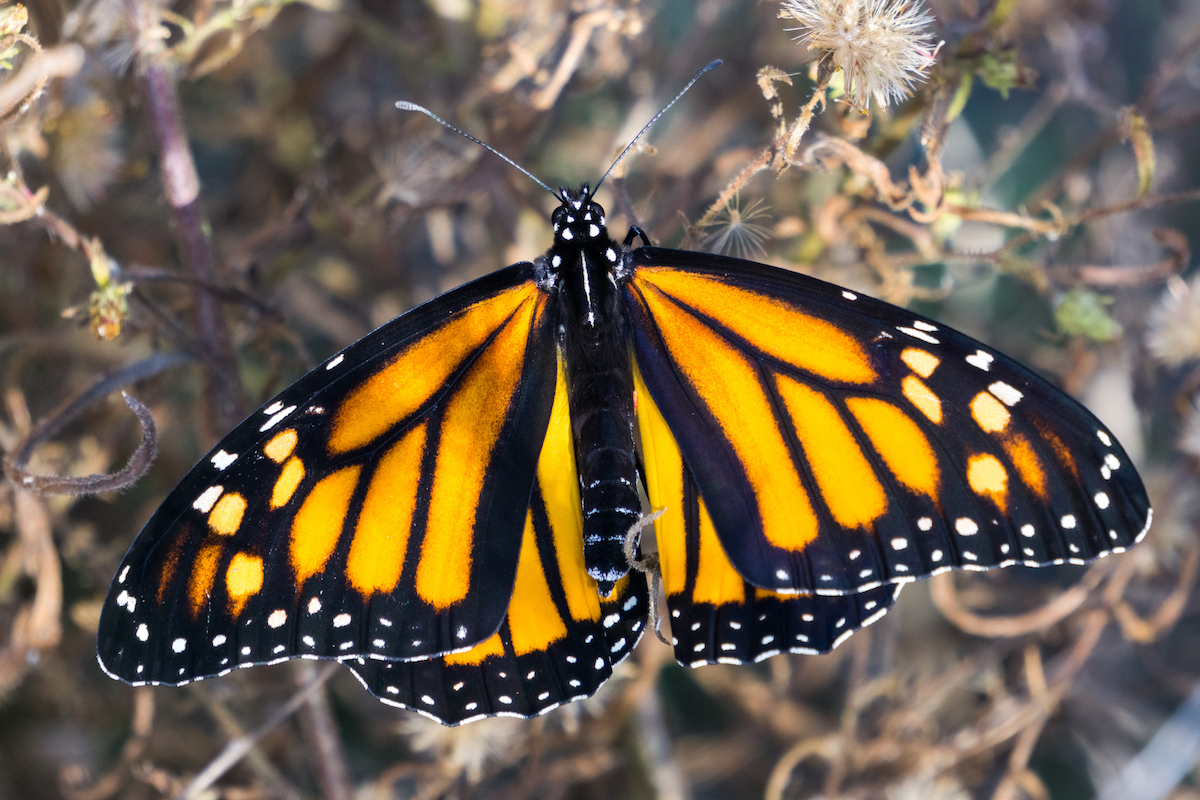 There are 18 critically endangered species of butterflies and moths in the state of California and the brilliantly-colored orange and black Western Monarch butterfly, a migratory species that breeds in Mexico and travels throughout California, including the Santa Monica Mountains.

The Monarch butterfly population numbers have fallen to critical levels and they are very close to extinction, according to a Xerces Society report from January 2021 from the Western Monarch Count.

“Only 1,914 monarch butterflies were recorded overwintering on the California coast this year [2020-2021]. This critically low number follows two years with fewer than 30,000 butterflies—the previous record lows—indicating that the western monarch butterfly migration is nearing collapse,” the report reads. “The final results from the 24th annual Western Monarch Thanksgiving Count show a 99.9% fall from the number of monarchs in the 1980s, when butterflies filled trees from Marin County to San Diego County.”

“The dramatic drop in counts of the Western Migratory Monarchs is deeply concerning. There’s a real possibility that we could lose the entire population. Lack of native Milkweed and plains areas with flowers for the butterflies to feed and lay their eggs. It really shows when you lose the habitat, you can lose an entire species. Tropical milkweed isn’t as good. Losing grasslands to development because grasslands are flat areas that are popular to be used for that purpose can really hurt a species,” Algiers said.

“In only a few decades, a migration of millions has been reduced to less than two thousand butterflies,” said Stephanie McKnight, a conservation biologist with the Xerces Society who helps coordinate the counting.

The US Federal government has only listed the Monarch as a candidate for endangered species protections as of winter of 2020. The state of California notes that listing but neither has made a move to give federal and state protections to the Monarch butterfly as yet even when the counts of the butterflies are nearing extinction levels.

Why are butterflies so important? In a quote to the BBC, Scott Black, executive director of the Xerces Society for Invertebrate Conservation says, “The butterflies are the canary in the coal mine, you know.” He adds “We’re going to see other butterflies and bees, and other important insects, and then our birds; and then our mammals head that same way if we don’t take action soon.”

While some might consider the Monarch and other butterflies and moths to be gorgeous but not necessarily important to Earth’s ecosystem, they are. Invertebrate insects are a key part of the food chain for larger mammals and are crucial to the fertilization of plants, including crops that humans live on.

Scott Black further explains in a quote to the BBC, “Over 94% of songbirds need insects to feed their young,” says Black. “If you want to have fish in your rivers and streams then they need invertebrates to feed on. If you want to have pollination of your food crops, then think insects. I think that people really do need to wake up: the ramifications are clear and will affect humans on an everyday level in the next 20, 30 years. And that’s my kids, that’s everybody’s kids around the world.”

But how can the average person help save these species like the Monarch? As reported by the BBC, you can take part in the US Fish and Wildlife Service’s Citizen Scientist program by reporting butterfly sightings and your observations about the insects. The Xerces Society For Invertebrate Conservation has its own Milkweed Mapper, where you can report on Monarchs and the Milkweed plant that is crucial to the species survival with photos and statements. You can also support the Xerces Monarch and Pollinator Highway Act to Congress. This act would “Provide $5,000,000 for each of fiscal years 2022 through 2028 for grants to benefit pollinators on roadsides and highway rights-of-way” and “Support pollinator-friendly roadside habitat through planting and seeding native grasses, wildflowers, and monarch host plants.” that would be managed by “state Departments of Transportation, Native American tribes, and federal land management agencies.”

Winemaker Carlo Mondavi and co-founder and CEO, Praveen Penmetsa created the Monarch Tractor, a non-Diesel powered tractor. He noted that there was no significant change to the technology of farm equipment in many decades. So he created this lower emission tractor that he says will pay for itself in time according to the BBC. He also created the Monarch Challenge Rosé, which sold out for this year, but will be available as a 2021 vintage next year. The wine is a Rose of Pinot Noir, natively fermented in stainless steel and neutral barrels that is produced and bottled by RAEN winery and shipped with a packet of Monarch-loving milkweed seeds.

Mondavi had this to say about the importance of the Monarchs and his wineries effort at conservation, “Who thought that the wind generated from the flap of a butterfly wing could change the world… that this motion from such a delicate creature could create waves that travel oceans and the breeze that fills the mountains with fresh air. We are ever connected… trees, bees, plants and nature all talk to each other and serve a sacred purpose. The Monarch Challenge is set to enlighten, encourage and connect our communities to farm and live in unison with nature and give back to the delicate circle of life.”