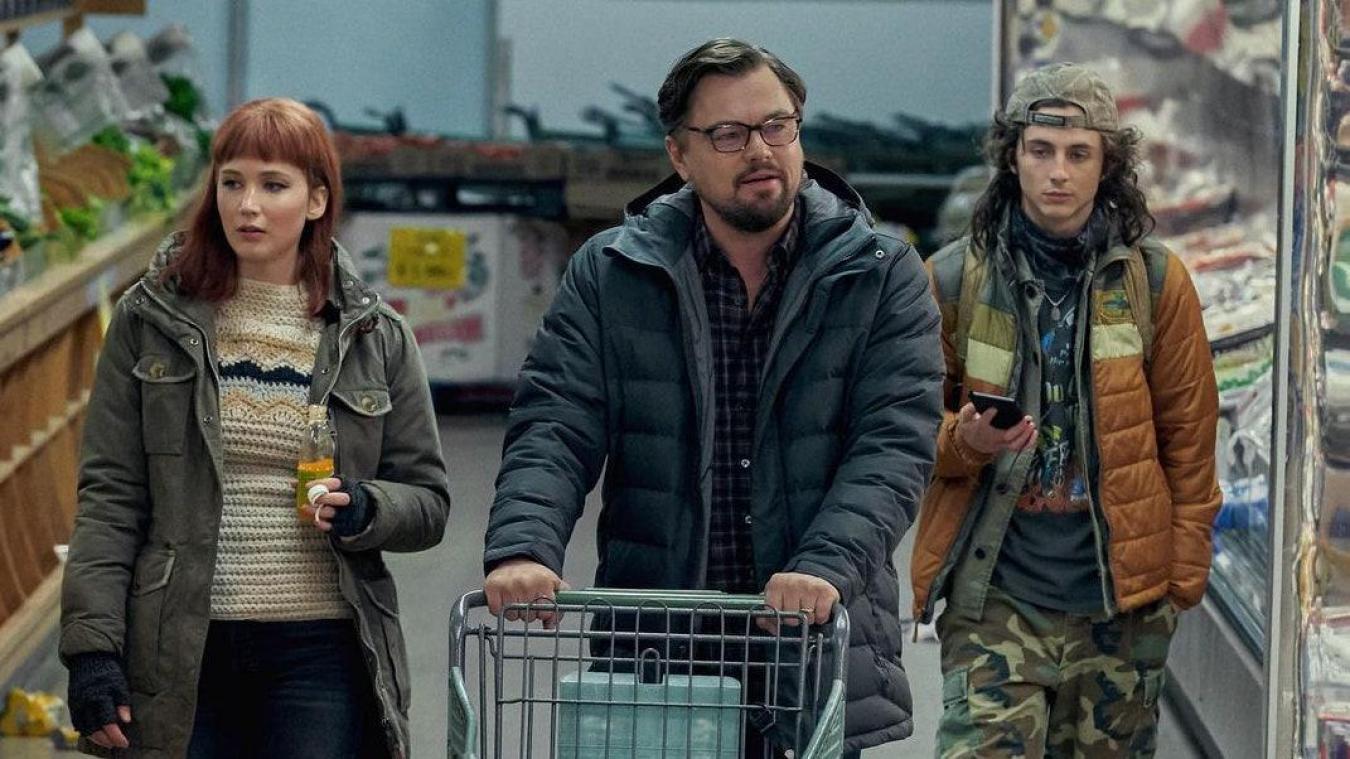 As with other Adam McKay movies, such as Vice and The Big Short, this film makes you think, laugh and do some soul searching, all at once. It walks the thin line between comedy and tragedy. The title reflects the act of turning away from the truth, of putting your head in the sand. McKay is at his best when tackling major shortcomings we have collectively as humans, especially when it comes to communications and blind belief.

McKay is a brilliant comedian/director/screenwriter/producer who processes the plight of humanity at the speed of light. Sometimes watching his films, so many things are happening at warp speed on so many levels, I can almost imagine his head blowing up. His humor makes his cutting anger palatable. You won’t turn away from the lessons offered because they are so enjoyable.

Yes this is a treatise on humans destroying their environment, though it is more importantly an analysis of the “how” – how have we let this happen? The answer lies in the asset that supposedly lifts us above other animals (or does it?) – our ability to think analytically, and that gives us the hubris to feel entitled. We have not learned to question our comprehension of the existence we have been gifted. The question is not whether or not the planet could be destroyed, but about our warped mass mentality. Who do we listen to, how do we decide what to believe, how do we get our facts? Do we ask enough questions? The frequent references in the film to nature hint at the bond of communication that we need to develop between ourselves and the living organisms with which we share our planet.

McKay is like a talented conductor pulling dazzling performances from his orchestra. There are so many superb comedic parodies in which to delight in this garden of human depravity. Legendary actors are paired with one another in richly complex relationships. Cate Blanchett and Tyler Perry as vapid news anchors – Blanchett spouts nothingness while her face reveals all. Meryl Streep and Jonah Hill are a power-mad President and her sycophant son. Leonardo DiCaprio and Jennifer Lawrence are introverted scientists, and Melanie Lynskey is in the mix as DiCaprio’s wife. Rob Morgan, one of my acting idols, has eyes that see the truth, even when it’s not pretty – the soothsayer. Mark Rylance, so impressive in deep dramatic roles, is hilarious as the tech genius hopelessly in love with his own dreams. Timothee Chalamet, who seems to pop up in every movie these days, is fascinating as kind of a “Dude” character, living in the moment. Ariana Grande displays great comedic timing in a a parody of herself and is joined by Kid Cudi. The ensemble was just nominated for the SAG Award equivalent of Best Picture.

DiCaprio’s involvement in this film is on another level as well – as a longtime dedicated activist for our planet. After he had wrapped his career-making role in Titanic in 1998, he met with VP Al Gore to discuss the frightening aspect of climate change. Before he was 25 he had formed the Leonardo DiCaprio Foundation, which has since awarded over $100 million in grants worldwide on behalf of conservation and climate change advocacy.

At the end of the main story there is a scene that recalls The Last Supper. A later scene appears as a post-script over the credits, is at once hilarious and tragic. It resembles a Hieronymus Bosch painting from the Middle Ages – you know, that historical period when people thought the world was coming to an end. The film is an allegory as were Bosch’s paintings. Our world is in imminent danger. We humans have highly developed our abilities to deflect and escape the present, and those tendencies could be our downfall if we don’t face up to the pain, for a change! None of us is entitled to live on this planet. We need to earn it.