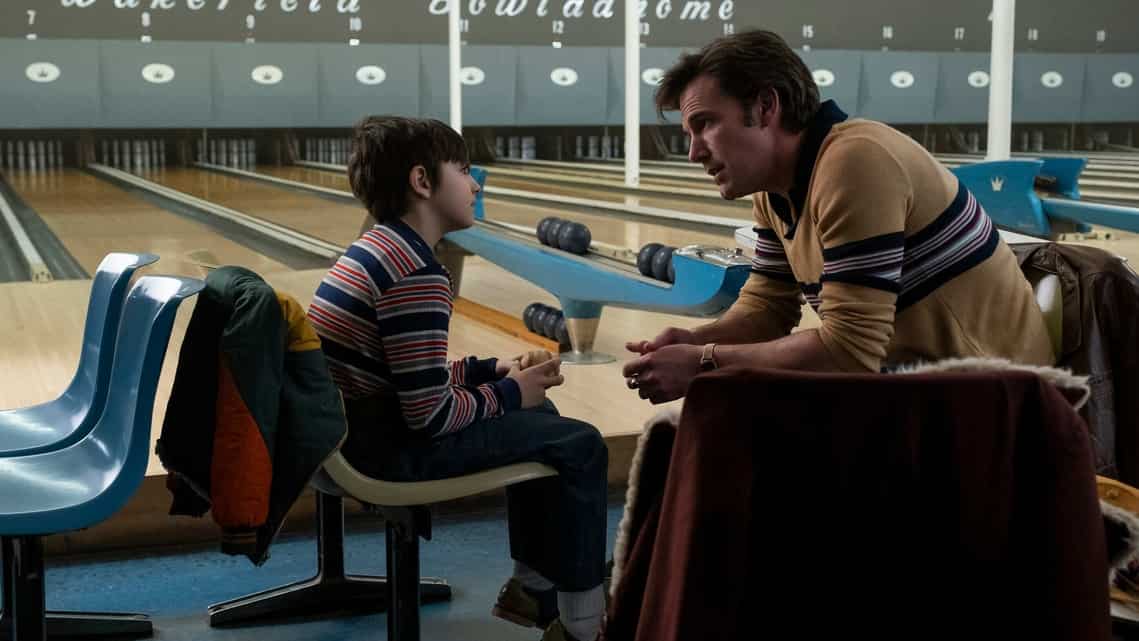 Everyone has childhood memories – some fond and others, well maybe not so much. One of mine is having Sunday lunches at my Aunt Jenny’s house in the projects where my cousins and I piled around the Formica-topped table and ate wide noodles with butter and lots of pot cheese with glasses of dried powdered milk that came in a package. Childhood coming-of-age memories informs “The Tender Bar”, a memoir written by J.R. Moehringer, a Pulitzer Prize winning journalist. Perfectly adapted for the screen by William Monahan, George Clooney skillfully directed this non-linear film which quietly tells the story of Moehringer’s colorful childhood experiences and his challenging road to success.

A voice-over by our protagonist begins the film in the year 1973. A young mother, wonderfully played by Lily Rabe, and her son JR, incredibly portrayed by an adorable Daniel Ranieri, who makes his film debut, are driving in a car packed with personal belongings. This young actor will both make you laugh and sometimes tear your heart out as he experiences the challenges of growing up in what can only be described as chaotic living conditions. Mom is broke and has to move back to her childhood home on Long Island and once again live with her crotchety old father, a man of zero concern about relieving himself of gas anywhere, anytime. Nicely played by Christopher Lloyd who presents us with a layered performance which goes beyond what we see on the surface. Despite his crudeness and protestations, he makes room for anyone in the family who needs a place to live. That includes uncle Charley, his sister Ruth (Danielle Ranieri) and now JR and his mom. Ben Affleck delivers one of the best performances of his career, of which there are many memorable ones. He has crawled into the skin of his character and although his Oscar-worthy performance falls into the Supporting Actor category, it is the lynchpin on which most of the other characters revolve. His steady, unemotional advice to his nephew is direct and to the point. Young JR hangs onto every word dispensed by his uncle. For example, he tells him quite bluntly that “You are not good in sports, so you’ll have to find another activity.” Regarding JR’s alcoholic dead-beat absentee father, Johnny Michaels, a radio broadcaster referred to as “The Voice,” nicely played by Max Martini, Charley tells him “Don’t look for your father – he’s an asshole.” Every so often his father calls and makes a date to pick him up, but almost never appears, leaving JR sitting on the front steps of his house for hours. Charley tries to mentor his nephew in the requirements of manhood. He teaches him how to place his money on the bar, where to keep a stash (cash) in a secret pocket of his wallet, “Which you never spend,” and how to play 5-card stud. He also councils him that you never hit a woman “Even if she stabs you in the neck with a scissors.” JR does his homework at The Dickens Bar – a blue-collar watering hole for locals not unlike the bar featured in the television hit comedy “Cheers.” Although not educated formally and a bartender, Charlie is a vociferous reader, keeps stacks of books behind the bar and can intelligently discuss just about any subject. During downtime, he does word puzzles with young JR often giving him the answers earning him the reputation of being a “protégé.” Mom is adamant that JR will grow up and attend Yale University and later law school. Charley thinks his nephew should be a writer and tells him to read all the books stored in a closet, hence setting him on a course to his destiny. He also explains that in order to be a successful writer, you’ve got to have ‘IT.” Since Charley told him he’s not good at sports, there was a moment of holding one’s breath until he blurts out, “And you’ve got “IT.” There are several scenes that are particularly outstanding. Charley has a meeting with JR’s therapist who is quite concerned that JR won’t say what those initials stand for. Well, the uncle makes mincemeat out the shrink ending with: “You want to traumatize a little kid so you can hit on his mother?” A particularly poignant scene is in school where JR’s teacher tells the class to make invitations for a father/son breakfast. All the children hand in their invitations and in a really touching moment, JR tells his teacher, “I don’t have a father.” Well, that crusty old grandpa steps up to the plate and dressed in his Sunday’s finest, he fills in for the absentee father and charms the principal with his stories. Now, what would a growing-up experience be without unrequited love and older JR, played really well and sympathetically by Tye Sheridan, has a full taste of that. While at Yale, he falls in love with Sidney, a beautiful, but rather mean young woman played by Briana Middleton, a rich girl from Connecticut who dangles sex over and over again, only to break his heart each time by declaring, “I’m seeing someone else.” We know, based on his memoir, that although he faced a rocky road, he eventually becomes successful and lives out his mother’s dreams for him.

THE TENDER BAR received some negative reviews but I disagree with those colleagues. Yes. There are no scenes that steal the film, no fake CGI moments, drive-by shootings, or car chases but simple story telling. Under Clooney’s careful directorial hand, he lets the narrative unfold in a quiet, but compelling manner making this a triumphant cinematic experience.