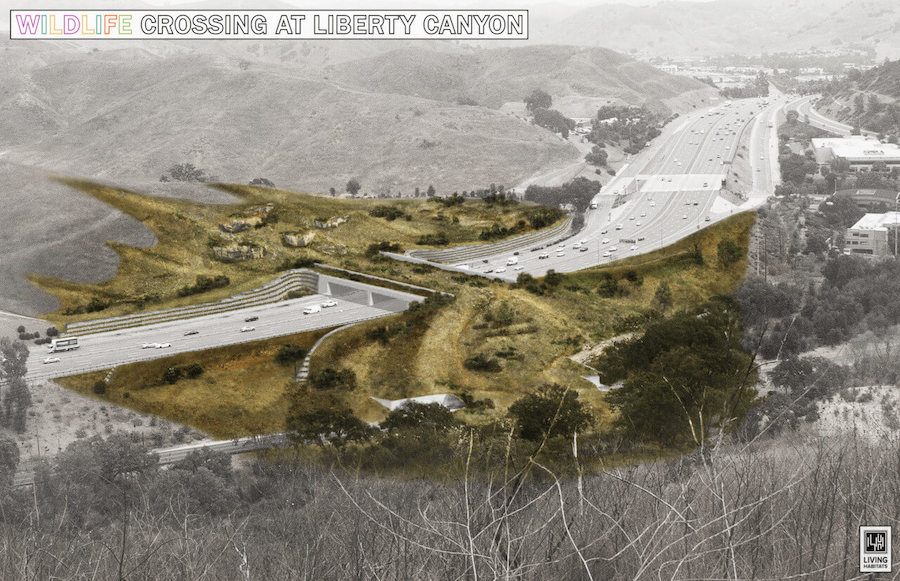 Crossing over the 101 Freeway set to break ground this spring

As reported by LA List, the Liberty Canyon Wildlife Crossing is on track to break ground this spring. The crossing will aim to provide a safe and sustainable passage for wildlife across US-101 near Liberty Canyon Road in the City of Agoura Hills that reduces wildlife death and allows for the movement of animals and the exchange of genetic material.

According to Beth Pratt, California Regional Executive Director for the National Wildlife Federation, the groundbreaking will take place this spring.

“[The groundbreaking is set for] this spring. [And] the bid is about to be advertised by Caltrans. That’s huge…I’ve been working on this a decade,” Beth Pratt, California Regional Executive Director for the National Wildlife Federation told LAist. “So that bid’s gonna go out and based on that schedule, we should be looking at break[ing] ground this spring.”

The freeway is a formidable and virtually impenetrable barrier for many wildlife species including mountain lions, bobcats, gray foxes, coyotes, and mule deer that inhabit and travel between these two mountain ranges. In particular, mammals with large home ranges such as mountain lions and bobcats need large connected habitats in order to hunt, breed, and thrive.

“The freeway is a formidable and virtually impenetrable barrier for many wildlife species including mountain lions, bobcats, gray foxes, coyotes, and mule deer that inhabit and travel between these two mountain ranges. In particular, mammals with large home ranges such as mountain lions and bobcats need large connected habitats in order to hunt, breed, and thrive,” reads the Santa Monica Mountains Conservancy’s website. “The construction of US-101 divided this previously continuous habitat range into isolated habitat fragments and resulted in severely restricted movement between the two mountain ranges. For mountain lions in particular, the consequences of this restriction results in increased inbreeding and territorial fighting, and very low genetic diversity, within the Santa Monica Mountains.”

“The wildlife crossing is critical in the linkage between the Santa Monica Mountains and the Sierra Madre Range, which is one of the few coastal to inland connections remaining in Southern California,” the website continues.

In addition to the news of the spring groundbreaking, LA List also reports that the State of California is set to provide the project $10 million as part of next year’s proposed budget. The total project cost will be around $78 million.

The news comes just weeks after UCLA scientists tracking two local mountain lion populations, one in the Santa Monica Mountains and another in the Santa Anas,  reported signs of inbreeding among these groups.

According to the study, these two populations are cut off from other cougar populations by busy freeways, and therefore face limited breeding opportunities.

The study reported the animals averaged a 93 percent abnormal sperm rate. In addition, some of the mountain lions displayed physical signs of inbreeding, like deformed tails or testicular defects.

The study called for the need for wildlife crossings, which would allow the mountain lions and other animals to find a broader pool of potential mates.

“Mountain lions, also known as cougars, are a bellwether species, making them a leading indicator that inbreeding could soon cause problems for other wildlife species in the Santa Monica and Santa Ana mountains,” researchers said in announcing the study. “The study warned that there’s a real risk of extinction for the mountain lions in the Santa Monica and Santa Ana ranges. Although they haven’t seen evidence yet, once scientists start finding significant inbreeding depression — meaning decreased fertility and reduced kitten survival — extinction is predicted to occur within 50 years, with a median extinction time of 12 to 15 years.”