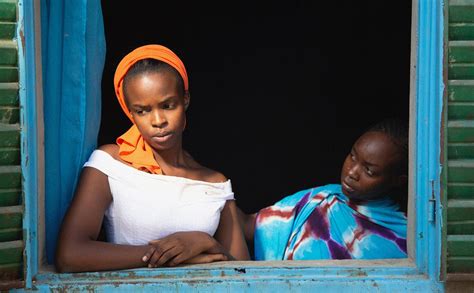 As I watched Mahamat-Saleh Haroun’s fascinating film, which takes place in Chad, a landlocked poor country in North-Central Africa, I was immediately struck by the universal elements of the human condition, which encompasses the unique features of well, being human.  It has been described as universal and not dependent on gender, or class.

The writer/director takes us to a small, poverty-stricken city on the outskirts of N’djamena where we meet Amina, gloriously played by Achouackh Abakar Souleyman.  She is a single mom with a 15-year-old sullen daughter Maria, strongly played by Rihane Khalil Alio.  Born out of wedlock, Amina’s family, abandoned her years before and the local Muslim people shun her.  She supports her daughter by buying old tires and stripping out the metal to make baskets which she carries on her head to sell in town.  Mom is a devout Muslim and attends prayer outside of the Mosque where she kneels on her prayer mat.  If she misses a call to prayer, the local Imam pays a visit to remind her of her religious duties.  Amina’s daughter is growing more and more petulant, cringing any time her mother tries to touch her.  In short order, mom is called to school and finds out that her daughter is pregnant and is summarily expelled from the Islamic Girls’ School as was she when her pregnancy was revealed. Amina tries to find out who the father is but her daughter will not reveal his name and says that she wants an abortion, a procedure that is both against Islamic law as well as State law.  Her daughter insists, “This is my body,” but Mom has difficulty in wrapping her head around her child having an abortion.  Gossip spreads among Maria’s friends, one of whom confronts her at a party telling her that people are talking about her. She insists that she is not pregnant and angrily leaves the party.  Worried that her daughter has not come home from the party, Amina goes to her old friend, nicely played by Saleh Sambo, telling him that Maria is missing and could he help her.  It eventually turns out that he is not the friend Amina thought he was.  In the meantime, Maria goes to a lake and tries to drown herself.  A few young men, who were also at the lake, rescue her and drive her back home.  Eventually, despite both the legal and physical danger, mom agrees to help her get an abortion and begins to research options.  She interviews Dr. Adoum (Hamid Khayar) who quotes a huge fee and admonishes her not to say anything to anyone as they could all wind up in jail.  Amina frantically makes more metal baskets but cannot raise enough money to cover the cost.  In desperation, she goes to her old friend Brahim, who has been asking her to marry him for year, and offers her body for the price of the abortion.  He is appalled and in search of a different option, she turns to a local woman who performs illegal abortions, as well as fake female genital circumcisions, the horrific procedure which is still practiced in this region.   In another plot twist, Amina’s estranged sister Fanta (Briya Gomdique) shows up out of the blue to ask for her sister’s help.  She is clearly affluent and explains that her husband wants their daughter circumcised which she totally opposes. Amina tells her about a woman who could help her and shares her desperation to raise the rest of the money she needs for the procedure. Fanta gives her all the jewelry she is wearing to sell for cash.   In this moment of mutual crises, they both help each other achieve their goals.

The director assembled a splendid technical team beginning with cinematographer Mathieu Giombini who captures both the squalor of Amina’s living quarters, which is strewn with old tires, as well as the innate beauty of daily activities such as dozens of people walking across a bridge alongside cars, bicycles, and buses. His camera takes us into the most intimate moments between mother and daughter where you can almost hear them breathing. His nighttime shots of headlights and distant lighting are exquisite.  Underscoring the action is Wasis Diop’s music with Marie-Hélène Dozo’s editing melding all the elements.

LINGUI: THE SACRED BONDS is an intimate film with a big message that illuminates the universal sacrifice a mother will endure to help her child, even when it is against the law and her religious beliefs.  It quietly illustrates the human condition as a universal truism – despite religion, economic, or social status.  Director Mahamat-Saleh Haroun was born in and like Woody Allen’s homage to his Manhattan, this is Haroun’s homage to his birthplace and tribal practices therein.   It shines a light on a traditional Muslim woman, who is clearly her own person, and although she is religious, will do whatever it takes to help her child, a situation mothers in our own country will undoubtedly find themselves facing in view of the draconian anti-abortion laws currently being enacted.