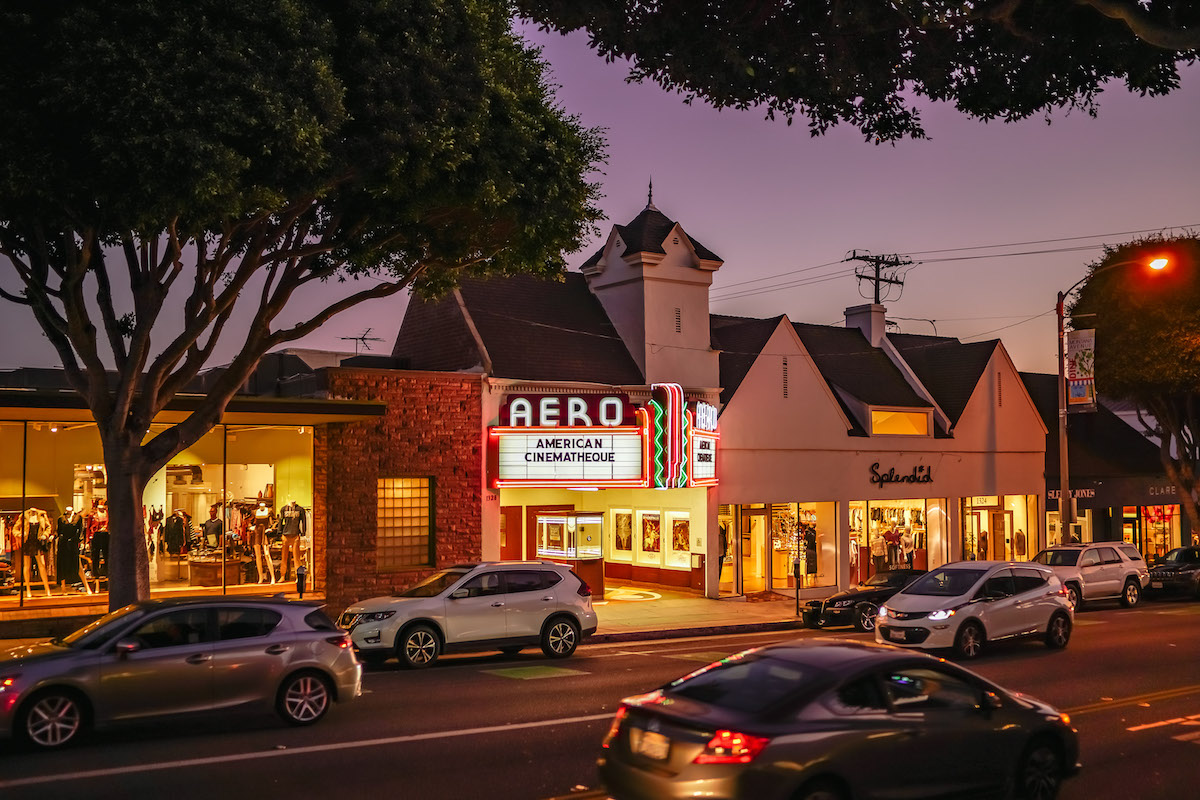 The Aero Theatre at 1328 Montana Avenue is the Westside home of The American Cinematheque. The American Cinematheque was founded by renowned director Sydney Pollack and the creators behind The Filmex Los Angeles Film Festival after Pollack took a trip to Paris in 1984 and experienced the Cinémathèque Française. It was then that the idea of a year round film festival in the City of Los Angeles was born. The newly formed American Cinematheque began screening films in 1985 and has been providing Angelenos with the opportunity to discover new types of films by hosting “immersive in-person discussions and events with thousands of filmmakers and luminaries.” and giving cinephiles the chance to see one of a kind film prints and films that rarely screened anywhere for 37 years.

The Cinematheque’s website describes the Aero with these words, “The Aero Theatre, its name a tribute to the aerospace industry, was built by the Douglas Aircraft Company. The Streamline Moderne-styled theatre was designed by architect R.M. Woolpert originally opened its doors to moviegoers in 1940. In 2005, the American Cinematheque spearheaded a renovation of the theatre and re-opened as the Max Palevsky Theatre at the Aero in Santa Monica. The theatre was updated again in 2019 and 2021 with new projection equipment, enhanced sound and facility upgrades.”

The Cinematheque offers yearly memberships, which offer significant ticket discounts, priority entry to regular events, invitations to members only screenings and events.  You can browse the film calendar and purchase tickets here:

I spoke with Deputy Director for the American Cinematheque Gwen Deglise and Insignia of Chevalier (Knight) of the Order of Arts and Letters about the Aero Theatre and its commitment to serving the Westside Community and the City of Santa Monica, providing young and old with the wonder and delight of cinema.

Could you tell me a little bit about how the Aero came to be part of the American Cinematheque?

The request to bring the American Cinematheque’s weekly film programming to the Westside of LA came from both the community as well as Philanthropist Max Palevsky. The Aero Theatre landlord was searching for a new tenant, and the AC stepped in to revive the historic theatre in 2003. After an extensive renovation, including new seating, brand-new concession stand, and upgrade of the projection booth with 35mm / 70mm projectors as well as state-of-the-art digital, AC programming at the Aero started in January 2005.

How do you select the films that will screen at the Aero? Do you tailor those selections for the audience in the area?

There are hundreds of variables that go into Film Programming, but the films are always selected by the Programmers with our audience and members in mind. The Programming, first and foremost, serves the community. Our goal is to make sure we offer the public (whether it’s the local Los Angeles community or, via our virtual presence, nationally) an eclectic, diverse and relevant slate of programs. One of our founders, Sydney Pollack had a vision of a cinema for everyone, showing all genres of film, new and old, from around the world, with equal passion and respect. We identify a balanced selection of programming for our audiences within any given time frame, so we can offer something for everyone.

What does your theatre hope to accomplish in the community?

Our goal is to facilitate the conversation around the artform. We are not a multiplex that throws a movie on the big screen without any context. We want people to leave the theatre connecting with one another over the shared experience. Stemming from our belief in the communal power of film, we seek to use the medium to generate meaningful discussion, often in the form of Q&As at our screenings between filmmakers and audiences.

We want to create one-of-a-kind cinema-going and movie-watching experiences for the community – we do this by applying the highest standards not only to our theatrical presentation. We strive to be a ‘filmmakers’ exhibitor’ prioritizing best-in-class presentation and utilizing both modern (digital) and historic (35mm, 70mm) film and sound formats. The exhibition quality is meticulous, our screen masking correct, and the theatrical experience in the hands of conscientious experts, who treat exhibition like an art form in and of itself.

Are there any series for families or children?

The event calendar changes monthly, but there is always something for everyone.

What series or screenings would you most recommend to film fans or to those who want to start coming to the theatre but don’t know what to watch?

Movie tastes are subjective, but we are currently curating between 80-100 films a month at our theatres, the Aero Theatre and the Los Feliz 3, that we believe people should experience watching on the big screen.

We’d recommend for someone who’s not sure where to start to browse our upcoming events calendar, and to subscribe to our email newsletter to see what piques their interests.

At the Aero Theatre, we have the ability to screen in rare 70mm (large format), which we would highly recommend to anyone if they have never experienced a movie this way before – it’s one of the most awe-inspiring ways to spend time in the theatre.

Do you show new films?

Absolutely. Whether it be studio or independent, and anywhere in the world – we are continuously searching for new films and emerging filmmakers, as well as new restorations.

What is a repertory theatre?

We are modeled less after a repertory theatre, and more after a true Cinematheque. Our founder Sydney Pollack based the idea of the American Cinematheque off the Cinémathèque Française, after an inspiring trip he took to Paris in the early 1980s.

From Founder Sydney Pollack (1984):
“I want to take just a minute to give you a little bit of an overview of what a Cinematheque is and what we intend to do.  The most common misconception about this organization is that it is some kind of private club or that it is only for film historians or film buffs. Nothing could be further from the truth.  The thing that is unique about it, and the thing that makes it different from a lot of other film organizations, is that it functions as kind of a liaison, a translator, if you will, between the industry and the public… the industry and all those people that are fans of film in general.  Yes, we will have memberships, but we are going to have an organization that we hope will be full of people who are just plain curious about, and fans of, film and video.

One of our major points of pride, and one of the reasons that so many fellow filmmakers are excited about this concept and joining with us, is that we are dedicated to presenting the films in a pure state – as they were originally intended to be seen.  We are going to have absolutely state-of-the-art theaters and projection.

Most of the programs that we run will not be available in commercial theaters or on TV – extraordinary programs put together by some of the other Cinematheques around the world.  They do not come to the United States now because we don’t have a proper place to exhibit them.  This will function much the way museums put together programs from all over the world…. [we want to ] encourage people to stay and browse, and hopefully develop a sense of film community.  We are going to include film and video, new and old, foreign and American, features, shorts, documentaries, animation and television…every form of the moving picture.”