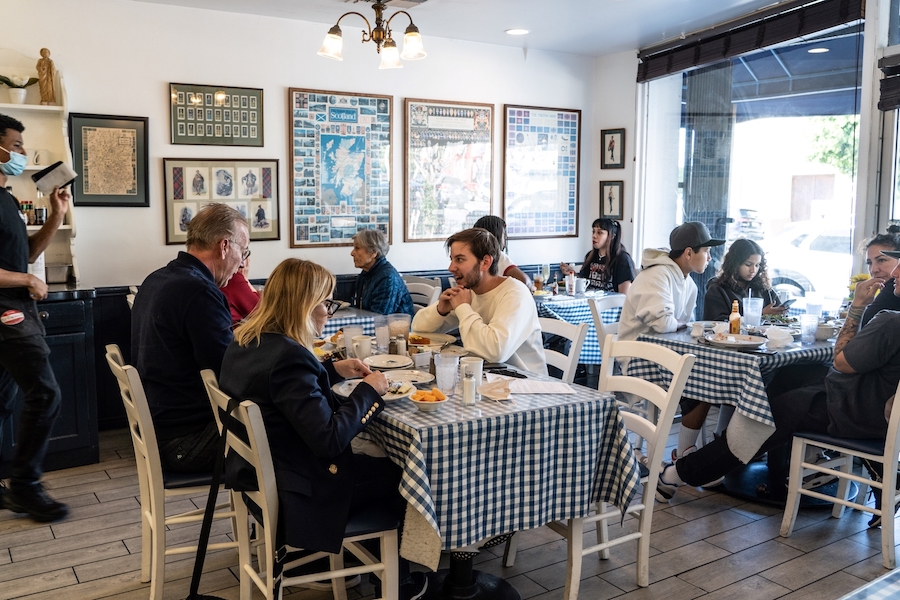 John O’Groats, the beloved breakfast West Los Angeles restaurant, will celebrate its 40th Anniversary soon with a giveaway for the first 40 customers.

To celebrate this milestone, on Saturday, February 26, 2022, the restaurant, located at 10516 West Pico Boulevard,  will give each of the first 40 Parties to arrive for breakfast a $40 gift certificate.

Owner and General Manager Paul Tyler has been operating John O’Groats daily for decades, having taken up the baton from his parents – Angelica and (the late) Robert Jacoby – who originally founded the venue on February 26, 1982.

“We love our customers – it’s as simple as that. Our customers are what drive our business, and we have long been humbled by the overwhelmingly positive feedback we’ve received by the Southern California community over these past 40 years,” Tyler said. ” Our customers simply love what we have to offer, which includes our famous fresh-made biscuits and pancakes, along with dozens of other breakfast and lunch specialties. We also pride ourselves on our catering and event services, and we are able to make any of our menu items available for take-out or to be included on an event’s catering menu.”

John O’Groats, named for a city in the far north of Scotland, was opened on February 26th, 1982, by Angelica Jacoby and her husband, the late Robert Jacoby. Robert was previously the owner of the West Los Angeles restaurant “Bit ‘o’ Scotland.” The original John O’Groats restaurant was located at the southwest corner of Manning Avenue and Pico Boulevard in West LA. At that time, it was a 750-square building with just a 20-seat counter.

At the original site, Robert was the cook and Angelica was the waitress. The venue remained at its original location for two years. In the summer of 1984, John O’Groats relocated to its second location, where it remains today on West Pico Blvd. This was the summer before Paul Tyler’s freshman year at Cornell University’s School of Hotel and Restaurant Administration. The Jacoby’s continued to run the restaurant with great success, while Paul was learning more about the business aspects of the restaurant industry. Upon Paul’s completion of his four-year program at Cornell, he returned to work for his parents.

Paul originally worked in the kitchen, then later as a waiter and a manager, putting to use the principles of both Cornell University and what he’d learned from the Jacoby’s. In the summer of 1994, Paul became the Managing Partner, and since that time, he has created some of the signature dishes that are a part of the O’Groats experience, including Huevos O’Groats and the Vegetarian Hash.

“I have so much faith and trust in God and I’m very proud of everything I have. The key to our success in this business is simple: you have to like people. My son Paul is a real people person – a very nice man who has always been an extrovert. His role here at John O’Groats isn’t a job for him – it’s his life,” Angelica said.

In the summer of 1995, the restaurant expanded into the storefront that was just to its east. Another expansion occurred again in July of 2000, with the addition of 1,300 square feet of new space in the adjacent storefront to its west.