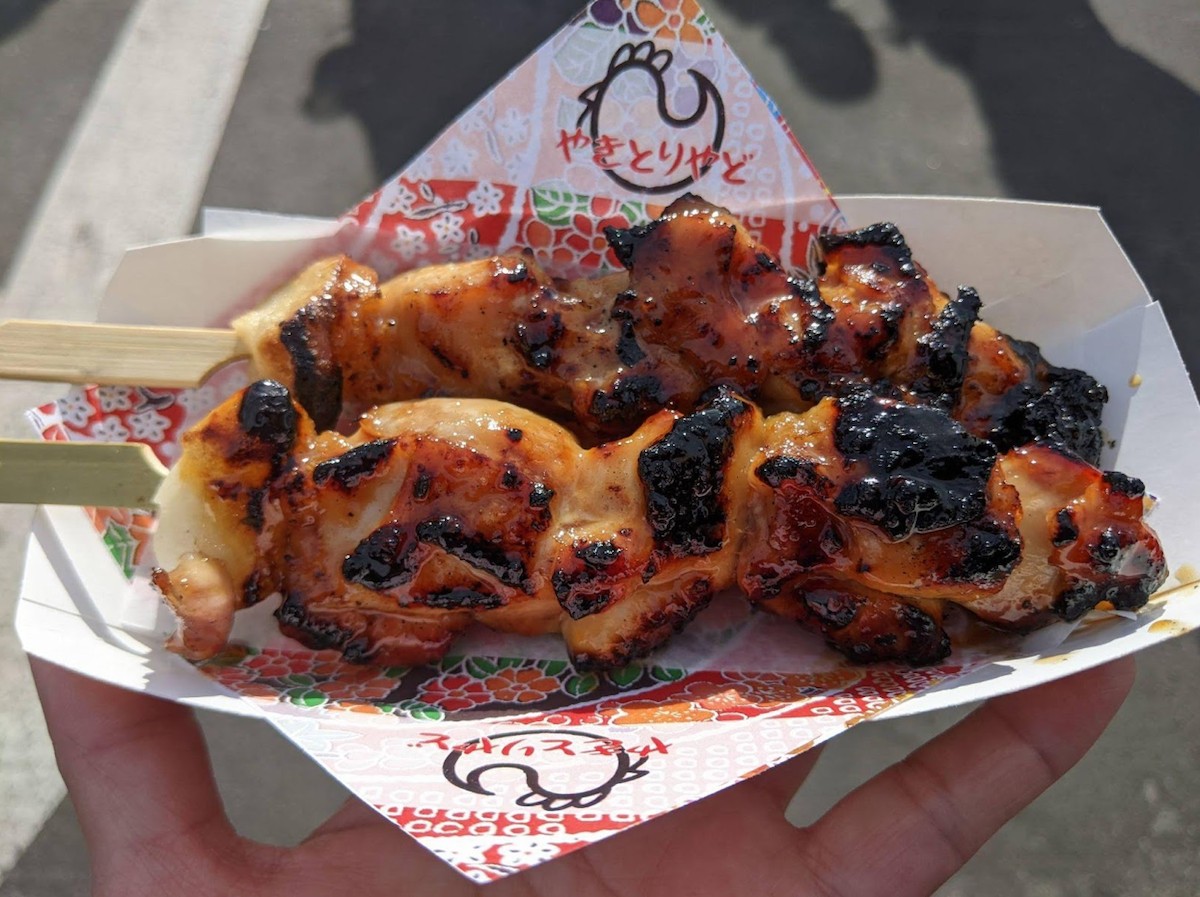 I spoke to the team at the site and they said that the line to enter the market started a half an hour before 1:00 p.m. and stretched past the corner and down the block. The market was full of people, even though most lines weren’t that long. Even though the event is described as a mini event, there are 23 food vendors on site for you to choose from. It’s an amazing variety of anything from light snacks, like yakitori, pizza bao, gyoza, small desserts and almost full meals of fried giant squid and half of a full size lobster hot off the grill.

“626 Night Market is inspired by the famous open-air nighttime bazaars of Asia, where people come together to eat, drink, socialize, and be entertained. Established in 2012, the large-scale market is named after the 626 area code region of San Gabriel Valley, northeast of Los Angeles. The iconic Californian festival features 250+ food, merchandise, crafts, artists, games, live concerts, and entertainment attractions in an epic event that appeals to all ages with up to 100,000 attendees per 3-day weekend. The flagship event is held at Santa Anita Park in Arcadia. Two additional event locations were added to meet popular demand: OC Fair & Event Center in Costa Mesa in 2014 and Alameda County Fairgrounds in Pleasanton in 2018. 626 Night Market aims to unite and empower the community by serving as a platform for showcasing local talent including performers, chefs, and entrepreneurs.”

I tried a few different foods from a few different vendors and the food was hot and flavorful. First I tried Tao’s Bao Pork Belly Buns, which had three styles. You can get the Miso bun, the OG bun or a Kimchi bun. I went for the OG bun which was a good choice. The sauce was particularly good, the bun was chewy and the pork belly was tender. The bun has a red braising sauce, peanuts, Cilantro, pickled mustard green and that garlic peanut sauce. I would definitely try their other bun styles when I return.

Next I tried Rockin Gyoza and I was impressed. You get six gyoza, Japanese dumplings, which is a nice portion, topped with a sauce of your choice and red cabbage. I went for the lemon garlic sauce, which had a delicate but delightful flavor. It wasn’t too lemony or tart but had lots of flavor. Rockin Gyoza has four different sauces available, the lemon garlic and hot butter garlic, Teriyaki and Mango Habanero sauce for those of you who like a hotter sauce. The stand also has tater tots, veggie spring rolls, tempura green beans and tempura fried ice cream.

I wanted to try Ghostix, which is a stand that sells Ghost themed Korean style, beef sausage and rice batter dogs that have more complex coatings than your average hot dog on a stick, but the line was very long. This is a stand that I definitely want to try on another trip. They have a Rainbow Mozzarella called the Unicorn, Sweet Corn sausage Dog called Gizmo, Flaming Hot Cheeto dog called Lucifer, a diced potato dog called Goblin and Mozzarella Cheese dog called Casper with spicy Buff-Alo Sauce and an “extra corny” Cream Corny sauce.

I picked up some cake pops from Drunken Cake Pops for later and they did not disappoint. I got the Southern Gentleman and the Drunken Monkey pops and of the two, the Drunken Monkey was my favorite, however both were good. Yes, they are infused with real liquor.

Another stand that I would have liked to try but it was immensely popular with the patrons was Ubebon. The stand makes Ube cinnamon rolls with many different flavor combinations. The line of this stand never seemed to get smaller. The Bobaful Boba Tea stand right next to it was equally as popular. The Chicken Skin stand was busy too. Even when the lines were long, the stands did their best to get the food out a.s.a.p. I really don’t think that anyone waited too long, but I had a report to write.

The sheer variety of foods and number of stands guarantees that you will find something that you love and possibly multiple stands that could be the new favorites for everyone in your party.

It’s an event that you could come to more than once and still not exhaust the offerings that are available.