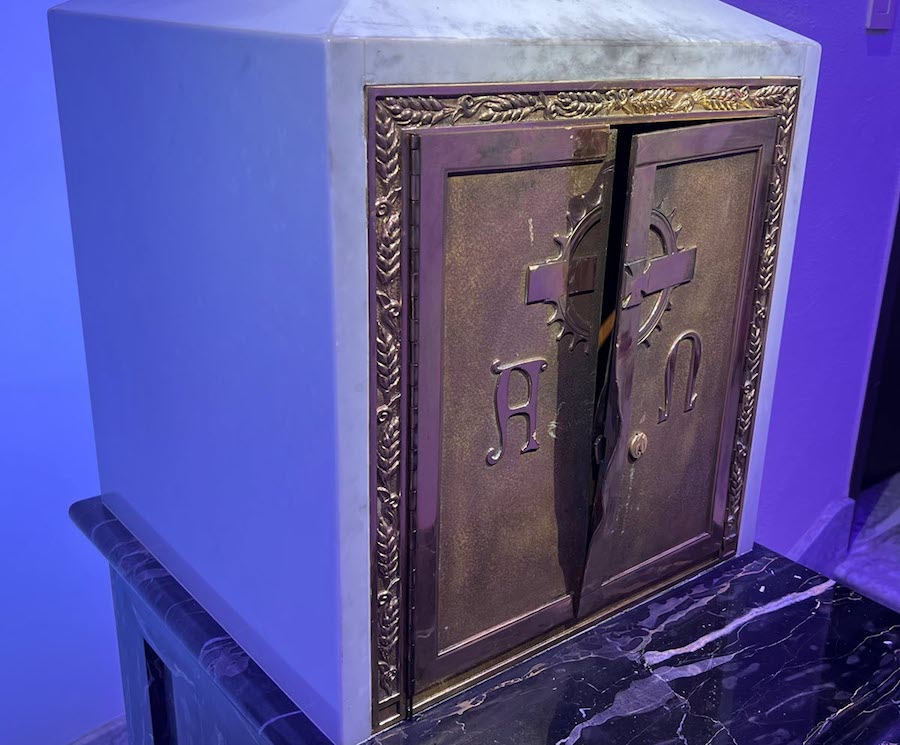 St. Monica Catholic Church was burglarized on Thursday night by criminals who stole $100,000 in video and sound equipment from the Church after services ended.

In a sermon on Sunday after the burglary, Monsignor Lloyd Torgerson called for forgiveness towards the offenders and that the congregation show love towards them by using the example of the parable of The Prodigal Son. The parable speaks of a father who shows compassion towards his son who has lost his way and welcomes him back into the family after the son dishonored his father’s wishes. The most relevant part of the parable to the congregation is that of the good son who stays with the family and asks why the other son was forgiven when he did wrong. It is a reminder that they are not being penalized for doing the right thing, but that forgiveness is what God would want them to show to even those who have wronged them.

The thieves also stole candle boxes and money that was still in the donation boxes. They attempted to force open the antique tabernacle of the church that holds the consecrated host for church services but were thwarted in that attempt.

Torgerson, who has been the leader of the church for 35 years said “The fact that we were violated in this situation is hard for me, and I know it’s hard for you. We have a challenge today. Somehow, some way we have to be able to forgive the people who did what they did to us Thursday night.”

According to Torgerson, the thieves hid in the church on Thursday afternoon, waiting until church members and staff had left the building for the evening.

CBS Los Angeles obtained security footage that showed a suspect, a Black male who wore white shoes and face mask and black pants and t-shirt, checking the interior of the Church for valuables including looking behind the altar where the Church’s video equipment was kept. Around 9:30 p.m. the suspect and accomplices started to remove items from the church and there are still photographs of the suspect walking through the Church with a flashlight.

Officials at the Church are of the opinion that three men were involved in the burglary.

During the sermon on Sunday, Torgerson gave more details about the burglary. Apparently, the burglars fled when a church employee returned to clean the church on Friday morning. Torgerson said that the employee “turned the light on and when he did, they ran out of the front door of the church.” Torgerson added that “We have a challenge today. Somehow, some way we have to be able to forgive the people who did what they did to us Thursday night. The drive and desperation of those who would violate a place of worship for material gain is confounding but not surprising. We must pray and forgive those who trespass against us and continue to work to serve the needs of others to bring contentedness and peace for all humankind.” The sermon was live streamed courtesy of equipment that parishioners provided to the Church.

Torgerson’s email to church members on Friday sent a similar message and detailed the items that were stolen and in it he wrote, “Much of our camera and audio equipment was stolen, along with our candle boxes. All of that can be replaced, so we must be thankful that no one was in harm’s way. They attempted to breach the tabernacle and it was damaged, but it held strong and protected the Blessed Sacrament. What an inspiring demonstration of the power of the Eucharist!”

To date, the Santa Monica Police Department has not issued a statement about the burglary.