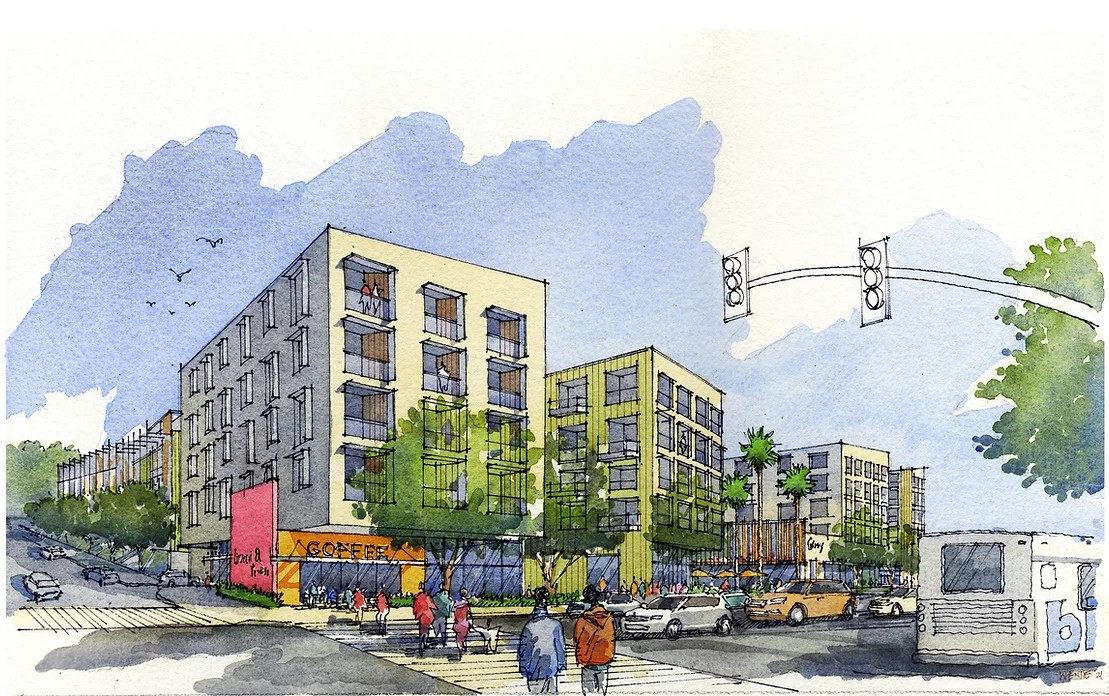 The recent zoom presentation of the proposed project at Ocean Park Blvd & Lincoln Blvd., frequently referred to as ‘the Gelson’s development’, stirred memories of past projects I studied in City Planning courses while in Architecture school at Berkeley all those years ago. (Go Bears). And one project in particular came to mind, the Pruitt-Igoe project in St. Louis.

In the early 1950’s, just about the same time that the Gelson’s site was graded flat, as it still is today and not on a pretend slope that disappeared 70 years ago, the much larger Pruit-Igoe housing project was being designed and developed in St. Louis. While the scale is different, there are similarities to the Gelson’s project worth exploring.

At the time, Pruitt-Igoe and other similar projects were a result of the Federal Housing Act of 1949 and post war nationwide urban renewal plans. Considered, at the time, to be cutting edge urban planning, the projects were intended to replace dilapidated low income neighborhoods described as crowded slum ridden urban blight. The projects were aimed at providing lower and middle income families affordable apartments with large, open, park like areas for play and recreation surrounding the buildings. At the Pruitt-Igoe site, the previously existing low rise neighborhood was razed and 33 buildings, at exactly 11 stories each, totaling 2870 apartment’s, were built.

What is interesting, in looking carefully at Pruitt-Igoe and Gelson’s, is that the failed, notorious, Pruitt-Igoe project in St. Louis actually provided more open space per unit than the Gelson’s design, and was half as dense as Gelson’s which has crammed 10 buildings of exactly 5 stories each with 521 mostly up scale market rate apartments onto the site. While I am only using gross numbers, they are equally applied to each project.  So, let’s see how that looks when some numbers are calculated and compared.

The failure and disgrace that was Pruitt-Igoe’s fate, was in part due to Brown vs Board of Education in 1954 finally outlawing segregation and some families that had moved in to Pruit-Igoe began moving out. Funding apparently began to diminish, proper maintenance began to be limited, and the buildings and grounds quickly deteriorated into dangerous vertical slums. As too often occurs, poverty gave rise to crime, gangs, and drugs, and within 10 years of completion Pruitt-Igoe was rundown and dangerous, and  buildings were vacated and boarded up. By the early 1970s, barely 15 years after the project was completed, the project’s residents had been removed, and demolition of all the structures began. A planning lesson that should have been learned appears to be a lesson lost in time.

I’m not suggesting that what occurred with Pruitt-Igoe will happen here on the Gelson’s site, but I am pointing out that the Gelson’s project is also a government sponsored project, in the sense that the developer is responding to and taking advantage of State government ‘bonuses’ that override local zoning height and density regulations. The State bonus comes from the inclusion of only 53 restricted low income apartments, which is only 10% of the 521 total, leaving 90% as high end market rate units. While Pruitt-Igoe was government funded and specifically designed and intended to solve a housing affordability issue and re-build an urban slum area to provide housing for lower income families, this project seems to flaunt the need for affordability. Sort of economic segregation by design, and the only thing not done here, yet, as we have seen on other projects, was to off-site the low income units.

The Gelson’s site development, as a quasi government bonus project, is provided with bonus development rights that allow increasing the number of market rates units by 50% without providing any additional affordable units than would be required for the base development permitted by city zoning. A government gift to a private developer and their investors. Not a bad deal I guess for the developer’s return on investment. However wrong it did go, Pruitt-Igoe was built with the premise that it would help solve a shortage of affordable housing and provide a lower income level of society a leg up and a healthy, more open planned, environment.

Is it ironic that the un-founded cry that there is a “housing shortage” is used to justify a project such as is proposed at Gelson’s? There are, per California Dept. Of Finance, about 4500+ vacant units in Santa Monica, as well as a declining state population. Add to that, that SCAG (So Cal Assoc. of Governments) has ordained, and the law is being implemented in our General Plan Housing Element, currently being updated, that Santa Monica must provide suitable sites by 2028 for an additional 8895 housing units, of which 70% MUST be for those of lower income levels. Yet here we see a project of 521 units, with a State bonus of 50% above our zoning allowance for height and density,  being ‘blessed’ with only a 10% low income unit count. 468 high end market rate units on a densely compacted site, with 880 cars designed to enter and exit the site on to a dedicated bus lane on a high traffic volume major travel route to a freeway one mile away, and with no traffic study or EIR required.

Prutt-Igoe was designed to remove a slum and provide a hoped for helping hand-up to affordability by providing a more livable environment. This project looks like it is designed to provide maximum ROI to its investor’s, but will also, no doubt, have a devastating negative impact on two well established adjacent, non slum, family oriented neighborhoods. As proposed, the project removes the only full-service super market for those two neighborhoods, as well as multiple neighborhood serving commercial retail outlets, inflicting additional inconvenience on those two adjacent communities. And furthering the notion that car use should be diminished, there are 816 bike racks with, perhaps, the unlikely idea that bikes are going to be ridden to some distant market and a weeks worth of food for the family will be ridden back home.

Or, with the inclusion of almost 900 car parking spaces, is it a recognition that adding more than 1000 residents to the site, plus commercial and visitors, that the private car will indeed continue to be with us for many years to come, but with the negative result of adding potentially another 2000 +/- car trips a day to an already overburdened boulevard and intersection. As there is a dedicated bus lane, but no bike lane, on busy Lincoln, is the bike parking designed just as ‘eye candy’ to appease those few that think the car is dead. (Hint: in 1980, while working with the community on the re-design of what was then a depressed Main St. after POP burned down, parking was an issue, but at the suggestion of increasing public parking the notion was rebuffed with the argument that “the car will be dead by the year 2000”! How has that worked out 42 years later? Not very well it seems?).

In summary, the developers decision to use the State bonuses, which isn’t mandated that they do, results in a project that is more than twice as dense, almost twice as high as locally allowable, with only one quarter of the open area per structure and 25% more units per floor than that social/environmental disaster that was Pruitt-Igoe. Up to 25-30% of the project could be used for commercial ground floor retail and the community would not have to lose the only large market and other neighborhood services, but the development team chose instead to reduce neighborhood serving retail from what currently exists while cramming in +/-900,000sf of structures and an additional 1000+ people on an imaginary sloped site.

Additionally, there does not appear to be, in the design drawings seen so far, other than a roof top swimming pool adjacent to the Lincoln Blvd. sidewalk, any outdoor social or play area set aside for children, or anyone else. And the stated justification, said on zoom, that children can play on a fire department required access driveway and turn around is shameful. Presumably a ‘playground’ in the hopes that a fire truck or EMS ambulance will never have to show up and chase the kids away before they can address whatever emergency they have to service. And as to water, sewage, and other infrastructure issues…that is another column.

All that said, unless it is determined that the Gelson’s project is not in strict conformity with all of the applicable local and state regulations governing such development, the project will receive the bonuses that allow virtually doubling anything that would otherwise have been approvable by city zoning, and without public input, or Planning Commission or City Council review. And a design that could be argued disregards socially conscious planning and environmental sensitivity in exchange for greater density appears to be in the hands of the developer and their team, with no source of appeal by the very unhappy 90%+/- residents that spoke against the project on a required developer zoom presentation two weeks ago.

So, what can be done about it besides pointing out the many obvious shortcomings of the project? Well, in the immediate sense, extreme scrutiny of all applicable requirements must be vetted, including determining and resolving any conflicting code sections or regulations that maybe are being applied favorably to the project, but to the public detriment. In the longer term, this situation exists in large part because of recent past, and some remaining, pro-development council members that need to be replaced, so the next election will be critical even if it doesn’t curtail this project. And that applies to State offices as well.