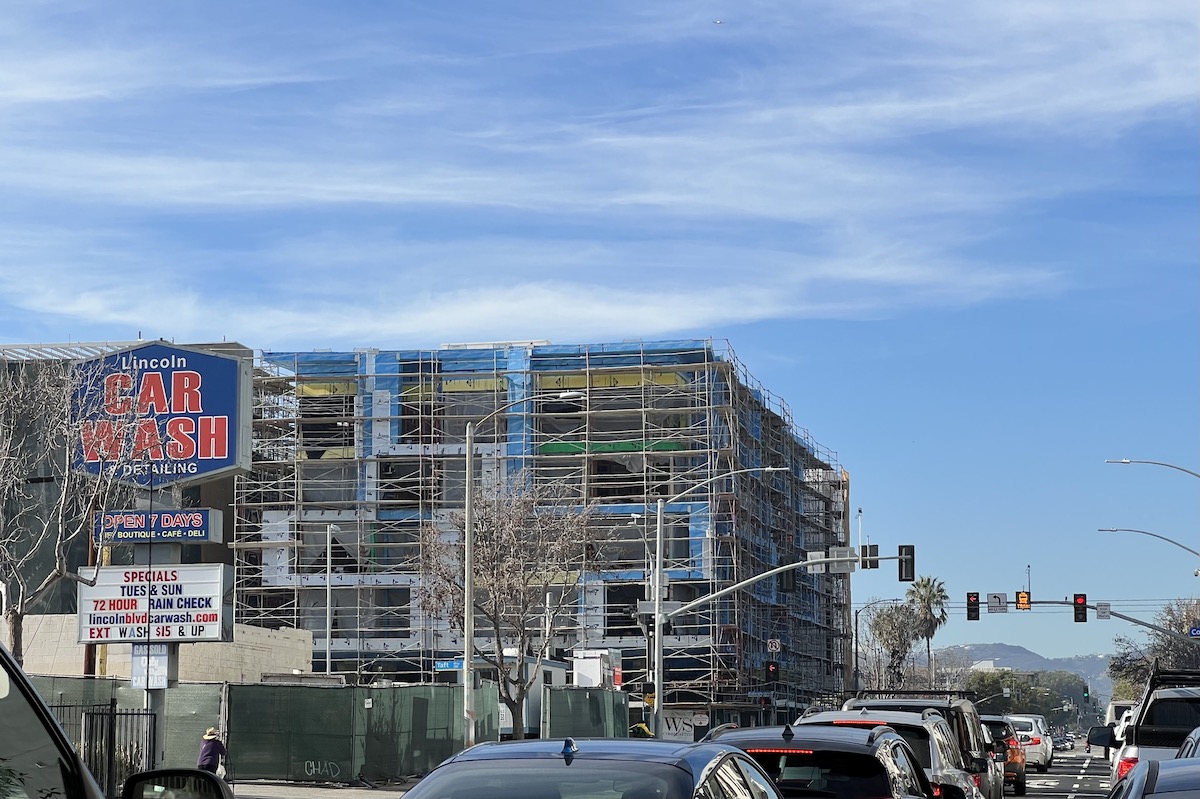 Our City is currently in the struggle to change its zoning laws, primarily by height increases, to issue enough building permits to increase our population by about 20% (8,895 units) in the next 8 years as demanded by the delusional State of California. The scale, and impracticality, of this dictate can be understood by realizing that it represents 88% of all the housing units built in our city since 1960. In other words we are expected to produce, in an already built out City, in only 6 remaining years, what took almost 60 years to accomplish?

Naturally, this is not something most Santa Monicans favor, since the vast majority understand, from their own experience, this to be an unnecessary, dangerous and ultimately unattainable goal. To understand why, we need to look at the actual population pressures on our city.

Based on the 2020 census, our city is in a constellation of jurisdictions all increasing at different but slow rates of population growth over the last 8 years (2012-2020): California + 4.4%, Los Angeles County +2.1%, Los Angeles City +4.1%, and Santa Monica +1.9%. We all can imagine the possible reasons for this past modest growth: drop in birthrates, less immigration, land speculation causing high housing costs, high taxes, lack of family housing, crime, weak job creation etc. which apply differentially at the state level down to the local level. But when combined, they show that there is actually negligible future demographic growth pressure. Using the state’s own population forecasts, which are objectively inflated, the demand for the current 8-year statewide Regional Housing Needs Assessment (RHNA) amount will not likely occur within the next 40 years. The state projects a very optimistic 4.4 million population increase in the next 40 years. During the last 40 years, the population increased by 16.1 million. In 2020, the state’s forecast projections indicated ZERO growth in 2020. Other state reports indicated a net population loss. In short no one really knows what the future of housing demand will bring, but it certainly will not grow at anywhere near the 20% that Santa Monica is being overloaded with.

The State’s own prediction of Santa Monica’s required units for the next 8 years (to 2028) of natural expected growth is about 1,156 units, or 2.2% of our existing 52,173 total units (2020 Census). This compares favorably to the last 8 years (1.9%) and is about an eighth of what the State is demanding now. Keep in mind, that demand was cooked up before we lost to Covid, 86,731 Californians and counting, the equivalent of almost the entire population of Santa Monica. The mismatch between the State’s imaginary housing demand and real population growth is why the States’ mandate is fundamentally delusional.

The Benefits of Slow growth

We should mention here that a slow growth rate is a desirable condition when faced with dwindling supplies of nearly everything: water (eg food), land (sea level rise), affordable housing (homelessness), power (clean air), public safety (rising crime and constant traffic deaths), open space (cramming huge buildings on tiny lots), retail income (Amazon is killing the retail sector eg. our Promenade), solar access (too many tall buildings), mobility (the EXPO line has made no improvement) etc. etc. In other words, slow growth rates are good because they allow us to test new solutions and adjust gradually to the pain of a rapidly changing world.

The biggest adjustment of course, in a changing world, is the need for a truly sustainable City, State, and eventually country and world. None of these State housing mandates are at all capable of producing the sustainable community we need. They actively prevent net zero buildings, drain our water table, militate against our tree canopy, encourage the demolition of existing housing stock and businesses, degrade our solar access, and in countless other ways fail to provide us the kind of housing we actually need. In fact the very execution of State mandates will guarantee that we fail to become sustainable to all the threats we already know are coming: global warming, gridlock, earthquakes, drought, pollution overload, power shortages (can you say oil embargo?) etc. While these State demands are temporarily building a gold plated City for the few, these real threats already effect everyone rich and poor, not equally, but universally. That is why the State mandate is so dangerous it prevents us from solving the real issues we face by manufacturing the mirage of a housing shortage theoretically solvable only by building more market rate units in an upzoned City.

By favoring quantity (lots of units) over quality (the kInd of units we need) we delude the gullible that we are “solving” the housing problem. The only kind of units we actually need are deed restricted, net zero (producing all the power they need on site), affordable units. Until we finance and build those units, there is no real solution to the housing problem and we are just digging ourselves into a deeper ecological hole by facilitating runaway market rate development of obsolete and dangerous ecologically disastrous buildings. In effect we are building more gas powered cars for a world of electric cars. We do not need any more up zoning to facilitate the construction of more market rate housing. Notice that the appropriately maligned Ocean Park/Lincoln project of 500+ units (90% of which are market rate) was designed conforming to almost all current Santa Monica codes plus State mandated steroids. In fact market rate housing permitting is now so prolific that in just two short years we are already approaching the needed State mandate of approximately 3000 new market rate units required by 2028. If all this construction is happening with current codes, imagine what will happen with the upcoming upzoning.

But Isn’t There a Housing Shortage?

It’s very hard to see what’s happening in the fog of purposeful misinformation. But contrary to popular belief, we have plenty of vacancies in Santa Monica. There is no housing shortage, period. The 2020 Census indicated 4,751(9.3%) vacant units. Meanwhile our city (03-30-21) cited a 2019 Census report that estimated 5,815 units (11.4%)! And, since our housing stock consists of 11,552 (22%) single family and 40,621 (78%) multi-family units, the actual multi-family rate is much higher. As is, these numbers are more than twice the “normal” vacancy rate of 4% to 5% for a normally functioning rental housing market.

There are many reasons for this high vacancy rate: some units are used for business, others are vacant for sale, while others are Air BnB units, some are being Ellised (taken off the market for demolition) etc.. But the reality is that the vacancy rate, as estimated by the state and the federal governments has fluctuated between 4,000 and 5,000 units over the last 10 years and has been steadily climbing during that time regardless of all the last decade’s construction. In other words our vacancy rate is decoupled from housing production. A rising vacancy rate normally reduces housing cost increases thereby providing rent/mortgage stability to residents and businesses. But the desirability of housing in Santa Monica for new wealthy renters/buyers is so intense, crime and homelessness notwithstanding, that vacancy rate can no longer function in its normal housing price stabilizing role.

But the real problem is very few of those vacant units are being offered for rent or sale at AFFORDABLE prices. Affordability is defined as an annual housing cost (rent or mortgage) at 30% or less than the area median income (AMI). Thus, we do not have a vacancy problem but an affordability problem: there is plenty of housing but almost none of it is affordable.

This up scaling housing market permits developers to buy buildings simply as speculative investments betting on runaway appreciation. For example, the 28-unit 901 Ocean Avenue sold a year ago for $32.6M. This rent controlled apartment building is clearly a speculative venture predicated on appreciation from $10.9M when it was refurbished 12 years ago till today while it appreciated at a 9.5% annual compound rate. In this overheated speculative environment, we need to clearly separate the tiny need for more market rate units from the specific need for more affordable housing. When someone says “housing crisis” they should really say “affordability crisis”.

Finally, speculation is not limited to the multifamily buildings. In the last year a report in the Washington Post indicated that up to a quarter of the home purchases in the 90402 Zip Code were by buyers using the titles such as “Inc”, “LLC”, “Corp”, etc. While it is difficult to use county assessor information in determining who actually owns a home, it does provide some indication that the institutional wave is making single family inroads to Santa Monica. This trend will only be amplified with the lot splits allowed by SB9, which requires the City to allow chopping up all the single family districts into tiny lots for more cramped housing. In the report, The Post article noted that the potential percentage of possible speculative buyers in the other zip codes was: 90401 21%, 90403 9%, 904064 6%, 90405 10%, and Venice 90291 19%.

So why can’t we just build more housing to crush the cost spiral by increasing supply and reducing demand? Next week’s article will explain why we can’t build our way to affordability.