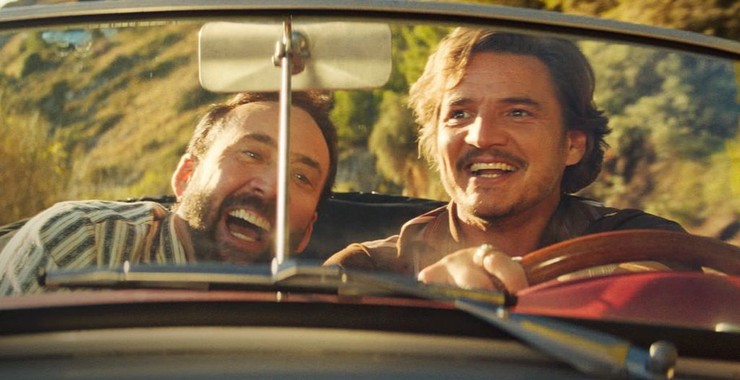 Watching The Unbearable Weight of Massive Talent, I got the feeling that director Tom Gormican had just completed a marathon viewing, over several sleepless nights, of every Nicholas Cage movie ever released, and then threw up a train-of-thought story of scenes from those films as if cramming them into a jigsaw puzzle where the pieces don’t all quite exactly fit. As it turns out, that’s pretty much how this movie was made. There are references to the plots and memorable lines from almost every Cage film, and in revisiting them, this film becomes wry, sarcastic look at deep psychological films, action thrillers, and formula blockbuster movies.

Gormican was a writer/ executive producer on the TV series “Ghosted” which ran for 16 episodes in 2017-2018. He had written and directed one feature, The Awkward Moment (2014.) He is a major Nicholas Cage fan. Gormican teamed up with fellow Cage fan Kevin Etten to write this film. It was their dream to create a movie about their favorite actor and revisit his best work by refashioning it into an ode to his greatness. They had never met Cage. Miraculously, when presented the screenplay, the star agreed to play the lead role. Gormican was flabbergasted, and adds that Cage was easy to work with and treated him as he would a celebrated director.

In the movie, Tiffany Haddish and Ike Barinholtz, superb comedic actors, play CIA operatives whose characters are one-dimensional. Haddish and Barinholtz are capable of giving us colorful, complex characters and should have been given the material to do that here. It feels as if they were simply added to move the story along, and when they weren’t needed anymore,…

Lily Mo Sheen, daughter of Michael Sheen and Kate Beckinsale, is cute and charming as Cage’s frustrated teen daughter, “Addy.” She was able to channel her own upbringing by her famous parents, although her home life is completely different from Addy’s. Sharon Horgan is perfect as Cage’s down-to-earth, “tell-it-like-it-is,” soon-to-be divorced wife. In a movie within the movie, Mom and daughter are played by the much more glamorous and modelesque Demi Moore and Anna MacDonald, who look nothing like them, but in true Hollywood fashion, would be the box office draw.

Now, full disclosure, I’m not a huge Nicholas Cage fan. However I fully respect him for making a career for himself and for creating a great tome of cinematic literature on his own accord in spite of being born into a family renowned in the business. This was in fact an enjoyable movie to watch. For myself, I credit that mostly to Cage’s good guy-bad guy sidekick “Javi,” played by Pedro Pascal.

Pascal is endearing and fascinating to watch. He brings empathy to this tragicomic supporting role. His presence was probably intended to be the comic relief to the always over-the-top Cage, and in the end Pascal effortlessly brings a sense of realism and balance to the movie.  I predict you will see a lot more of Pascal in future films. The actor has tumultuous and tragic life experience to draw from. He was born in Chile, where his parents were political activists and were forced to flee the country. The family eventually moved to Southern California, and in school his classmates bullied him for being different. Later his father was involved in a legal scandal and his mother committed suicide.

The Cage fans at my opening night screening gave this movie a standing ovation. If you’re not a Cage Superfan, you will still have a good time at this movie thanks to Pascal.