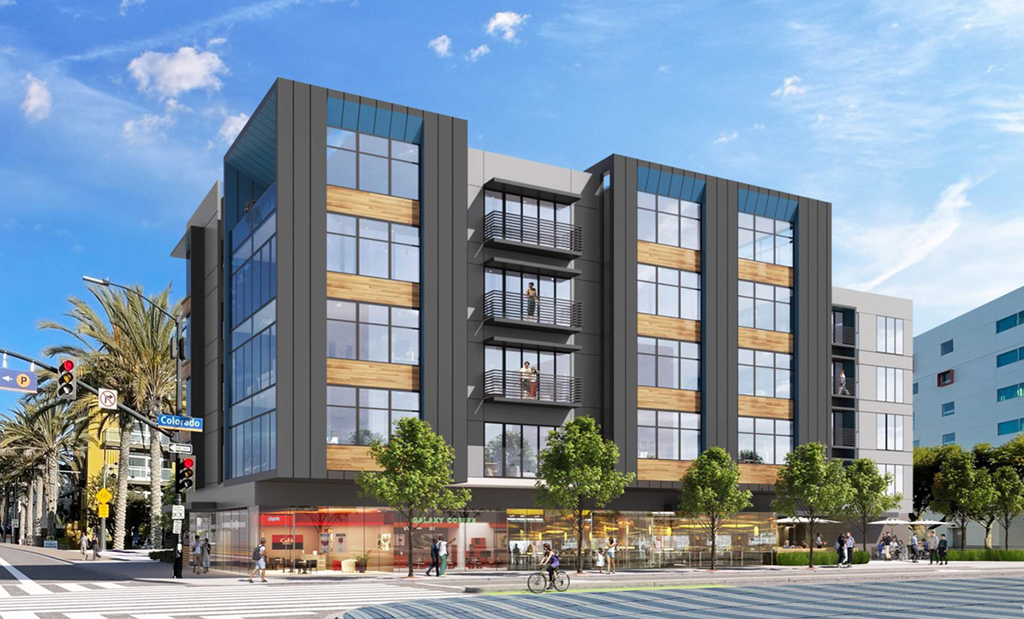 Worthe Real Estate Group has submitted an application to the City of Santa Monica for approval of a five story building that is a mixed-use residential and retail space as reported by the Santa Monica Daily Press.

This new proposal would rise at the closed BancWest site on the corner of 4th and Colorado Avenue at 407 Colorado. It would be a 60 unit complex with roughly half being studio units and the other half being one bedroom units. Six of the one bedroom units would be deed restricted as affordable housing for very low income households. The proposal lists no planned parking structure. The commercial space would cover nearly 7,000 square feet and shows a coffee shop as one of the proposed retail outlets in that space on the first floor.

The 407Colorado.com website says “The project site is located in the transit adjacent zone of Downtown Santa Monica, directly across from the Downtown station for the Metro E Line. The proposed project will provide 20 short-term bicycle parking spaces for both residential and commercial uses. The project is eligible for relief from certain development standards pursuant to the state density bonus law.”

The referenced state density law or SDBL does permit specific mixed-use residential/retail projects that would exceed what is called the maximum floor allowance ratio (FAR) if they are eligible due to accessibility to public transportation or affordable housing units available in the structure. The FAR for this project is estimated to be 2.87, over the usually allowed FAR of 2.25, but the developers note that is lower than the maximum allowable FAR of 3.15. The developer said, as quoted by the Santa Monica Daily Press, “at a 2.87 FAR, the project as proposed will not utilize the full 50% residential FAR bonus.” The total square footage of the project is set at a total 43,047 square feet of residential space, 36,166 of which would be residential and 6,881 of which would be commercial.

The project’s developers held a remote community meeting to discuss the project with local residents on Zoom but would not supply the Santa Monica Daily Press with a recording of that meeting. The developer did post notes from the meeting that showed the developers answering questions from two residents who attended the meeting.

A resident named Mary Ann asked, according to the note as quoted by the Santa Monica Daily Press, “What kind of retail do you imagine for the ground floor?”

A summary of the answer, from Jeff Worthe of Worthe Real Estate Group, states, “Best guess would be food-related uses, likely grab and go due to high pedestrian traffic from the train to the pier. Having recently walked the Promenade on a weekend, was surprised how much vacancy remains in retail market currently.”

The second resident named Gitte Walton expressed her feelings about newcomers to the area and said that she felt that she was “being surrounded by thousands of people in new buildings and they’re not people that settle down and have kids.” Walton added that she “figures that’s how life went.” as quoted by the Santa Monica Daily Press.

A spokesperson from Worth Real Estate Group was asked for comment and responded that it was their opinion that this development would be a great fit for the downtown area of Santa Monica which has a need for housing that fits the Regional Housing Needs Allocation (RHNA) levels set for the city of Santa Monica by the state of California.

The project’s application was submitted on March 10 for administrative approval which would be the first step in the full application process to replace the former BancWest structure.