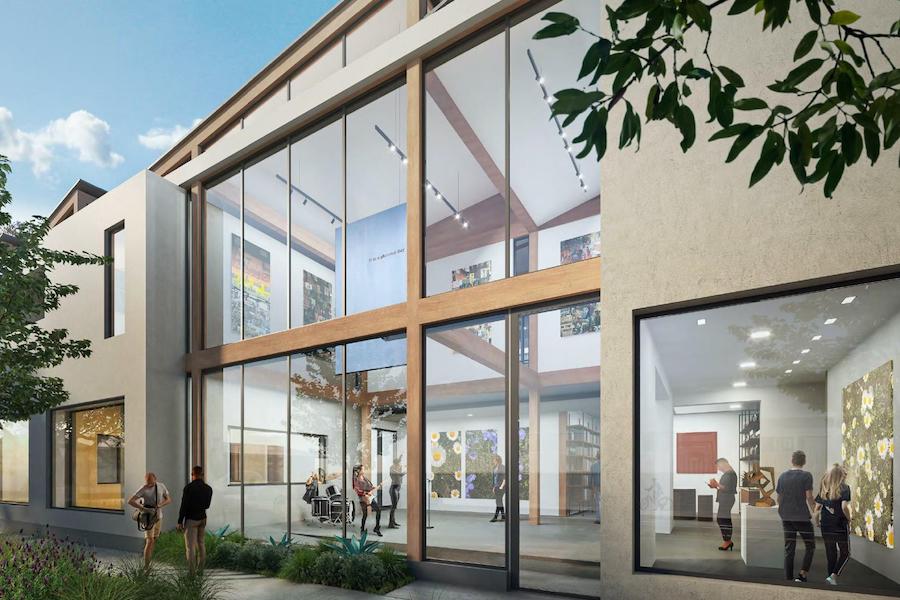 An empty lot used to store vehicles for an auto dealership at 1807 Broadway might become a mixed-use development with an art gallery as reported by Urbanize Los Angeles. The idea was proposed to the Santa Monica Architectural Review Board on April 18.

The developer is Green Bus, LLC and they intend to build a two-story structure that would house three residential units on the second floor above a recording studio and a 3,350 square foot art gallery. There would be 11 parking spaces in an at-grade parking lot. The building is very close to the Metro Memorial Park and 17th Street/SMC stations on the Metro Expo Line.

The designer is Rios, based in Los Angeles, and the design is described as being “separate rectangular volumes within a sequence of voids that reveal a mass timber structural frame.” which has a sawtooth roofline. The roof’s design would allow one of the apartments units to have a rooftop deck.

Both the proposed art gallery and the recording studio would be open for public use as a “cultural facility” according to the staff’s report.

The Architectural Review Board’s staff does recommend approval of this proposal and states that the project has “a clear, three-dimensional concept, is appropriate in mass and scale for the site and will serve to enhance the pedestrian activity and orientation along this stretch of Broadway,”