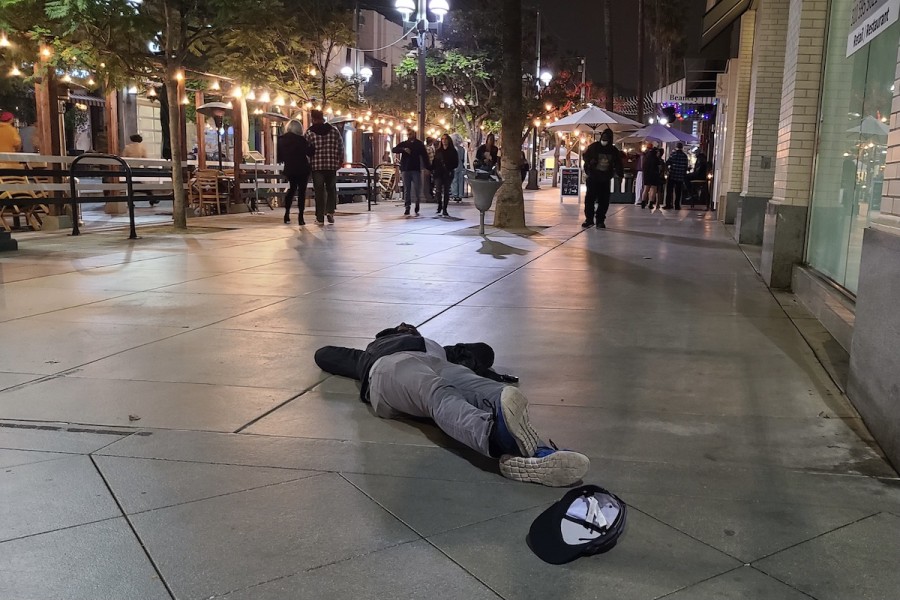 Citing safety concerns stemming from homelessness around the Promenade, Santa Monica City Councilmember Phil Brock is calling for the dissolution of the Downtown Santa Monica Inc board, in addition to private security forces in the area.

“I fully support the removal of the safety ambassador team as constituted and that they immediately be replaced by a high quality, armed private security force and both armed and unarmed details of the SMPD be placed there,” Brock wrote. “Having homeless outreach and security coverage on a 10-hour day coverage plan is insufficient when the problems of our downtown are 24-hour-a-day issues.”

In his letter, Brock said the current board make-up of the DTSM board is unable to tackle the issues of safety and homelessness the area around the Promenade is facing.

“I will support a dissolution of the current board of DTSM,” Brock wrote. “The board members we chose must be stakeholders within downtown who have business and shopping management experience.”

Brock later in a phone interview, refined his stance on whether or not the private security force needs to be armed.

“It doesn’t matter if it’s armed,” Brock told the Santa Monica Mirror. “What I was looking for was a security force that will be more present, that will give the police more help and that will be more highly trained. So when I looked at the private security forces Beverly Hills is using, and also some of the homeowners on the beachfront are using, most of them are either retired or off-duty police officers. So they have had significantly more training and would be more capable of doing their job.”

In addition, Brock told the Mirror that he does not think DTSM should be responsible for security in the downtown area.

“DTSM should not be responsible for the safety, security and cleanliness of downtown Santa Monica. That is a City of Santa Monica job,” Brock said. “They are spending $450,000 a month is my understanding for safety and cleanliness and security downtown. I don’t think the merchants and the property owners gain $450,000 worth of bang for their buck.”

Brock stressed that the SMPD should be responsible for securing the downtown area, but noted that this is not possible due to understaffing. Therefore short term he wants private security to step in. Currently, there are 47 vacancies in the SMPD, according to Brock.

“Whatever security force we employ to help the police will be replaced by our police department once they get to full strength. I am not advocating for a private security force–whether they are armed or unarmed–downtown on a permanent basis. Most of that security should be handled by the Santa Monica Police Department,” Brock said. “I am not asking for a militarized downtown, but what I am asking for is a downtown that feels safe enough for our residents to walk, bicycle and drive to that will be clean and safe for everyone in the city.”

When reached for comment, Barry Snell, DTSM Interim CEO and Chair of the Board of Directors said “For the past 25 years, Downtown Santa Monica, Inc. has diligently served the property owners, businesses, residents, and the City of Santa Monica, supplementing City services in maintenance and hospitality. Lately, DTSM has expanded its scope to include homeless outreach and public safety as the Board felt these areas were of extreme importance and that the City required added support. But ultimately, combating crime is the responsibility of the City and police department. We encourage Councilman Brock to focus his energies on the City’s performance of its duties, the chief being the protection of life and property.”

Brock in his letter also called for secure restroom facilities downtown open 24 hours. According to Brock, it should be a restroom with a restroom attendant and security guards.

“Right now, all bathrooms in Santa Monica, all public restrooms, are closed before 11 o’clock at night. If you talk to our Teamsters in the City, our custodians, people like that, and you talk to shop owners and residents in downtown, they wake up every morning when they walk outside their door to what the City terms ‘brown emergencies’. So human feces in various places downtown. It is cruel and inhuman at some point when we recognize we have homeless individuals on our streets not to have one or two restrooms in the City open overnight,” Brock said.

Brock said he would like to see security changes within 30 days.

“Summer is coming and we need to give residents solace that their concerns are being heard. We need to give merchants a chance to lease their stores and feel that the parking garages and the streets surrounding the Promenade are also safe,” Brock said.

Looking ahead, he noted there are some things that will take a long time.

“Decommissioning Third Street as a public street and changing the management to a public-private partnership, that is a long-term goal, but that would allow you to close the street after business hours and make sure it was thoroughly cleaned every night and safe. You could enforce trespassing. You have no homeless individuals who are camping, sleeping, or laying down in Santa Monica Place. It needs to be the same on the Promenade,” Brock said.

By Sam Catanzaro May 3, 2022
in News
Related Posts