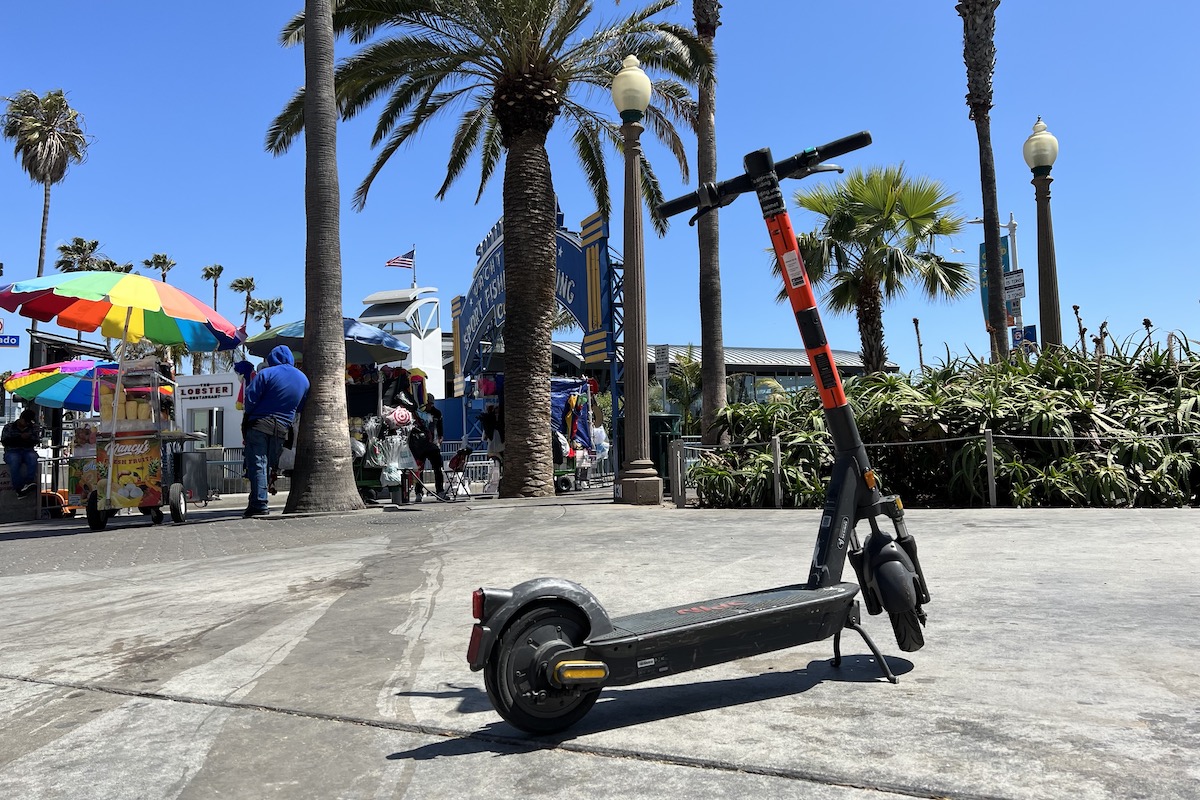 Recent report also shows that nearly half of riders make over $100,000

Shared mobility use in Santa Monica has plummeted, according to a recent report that also found that nearly half of riders make over $100,000 a year.

Shared mobility devices have been around in Santa Monica since 2017 when Bird rolled out their e-scooters. The City’s second 21-month pilot program began July 1, 2021. The participating companies—Lyft, Spin, Veo and Wheels— have provided 602,304 trips in Santa Monica during the first nine months of the Pilot Program, according to a recent city staff report released this month. This program had an initial fleet of 2,200 total devices citywide, and the potential to increase to the fleet cap of 3,250 devices based on demand. According to the report, however, between July 1, 2021, and March 31, 2022, 1,563 devices of the permitted fleet were available on average as operators did not deploy the fully permitted amount because demand has been suppressed by the pandemic.

This is a part of a larger drop in transportation activity experienced in Santa Monica. Between March and December 2020, the City experienced reductions in parking transactions of 52 percent, Big Blue Bus (BBB) ridership of 59 percent, and of shared mobility ridership of 77 percent, when compared to the same months in 2019. In 2021 during the first six months of the second Pilot Program, movement in the City continued to be impacted by the pandemic, with parking transactions and BBB ridership remaining at approximately 77 percent and 44 percent respectively, while shared mobility ridership remains at only 26 percent of pre-pandemic levels.

According to the report, shared mobility ridership has been slow to return to pre-pandemic levels. A core userbase, however, continues to rely on these services for regular transportation needs. In the most recent rider survey conducted in January of this year, 42 percent of the respondents reported that they ride daily or between 1-6 times per week.

Of the survey responses, 43 percent of riders live in Santa Monica, 37 percent live in greater Los Angeles County, and 20 percent reside outside of LA County. The most common trip purposes are recreation (28 percent), to/from restaurants and dining (22 percent), and commuting to/from work (21 percent).

The report also shed light on the economic demographics of riders. Currently, the four operators offer similar payment plan options and charge a similar rate per trip. All four operators charge a $1 unlock fee and between $0.33 – $0.39 per minute of use. At these rates, an average 1-mile trip costs approximately $2.57 – $3.051, rates that continue to be much higher than other public transportation options. According to the report, the demographics of the current user base skew towards those who are wealthier. Based on the bi-annual user survey, 47 percent of participants make over $100,000 per year. When asked “What barriers prevent you from using e-scooters or e-bikes in Santa Monica?”, 36 percent of survey respondents selected too expensive, the second most selected reason. The most selected reason was 49 percent of survey respondents saying devices were “difficult to locate” as a barrier preventing them from riding.

The City requires that each permitted provider offer low-income qualified rates that are easily accessible. The low-income programs that each of the four providers offer are based on requirements that range from home zip code, participation in state or federal programs or SMC enrollment status. The incentives range from monthly memberships at a reduced price, reduced or eliminated unlock fees, and per minute trip costs ranging from $0.05 to $0.29 cents per minute. In total, 307 riders are enrolled in the low-income options offered, who took a total of 8,367 trips. The report, however, noted the structure of signing up can present challenges such as requiring detailed paperwork of participation in federally funded programs to determine eligibility, language barriers, and can be difficult to navigate through the providers’ websites.

The report also noted that from July 2021 – March 2022, the City received 115,311 requests about shared mobility devices, which mostly cited mis- parked devices or bad rider behavior. Code Enforcement issued citations for 40 violations and impounded 584 devices for ADA blockages, being parked in the street, and blocking the PROW, operator response times, amongst other violations.

Those injured in e-scooter accidents included not only the vehicles’ riders, but also pedestrians who were hit by moving e-scooters or who tripped over parked e-scooters.

The researchers found that patients often were treated for injuries to the head and extremities. 533 patients sustained injuries to more than one part of the body, 72 were admitted to the hospital, 21 were sent to the critical care unit and 2 died from their injuries.

According to Santa Monica Police Department (SMPD), there were 16 total reported collisions involving shared mobility devices from July 2021 to March 2022 in Santa Monica.

By Sam Catanzaro May 20, 2022
in News, Transportation
Related Posts