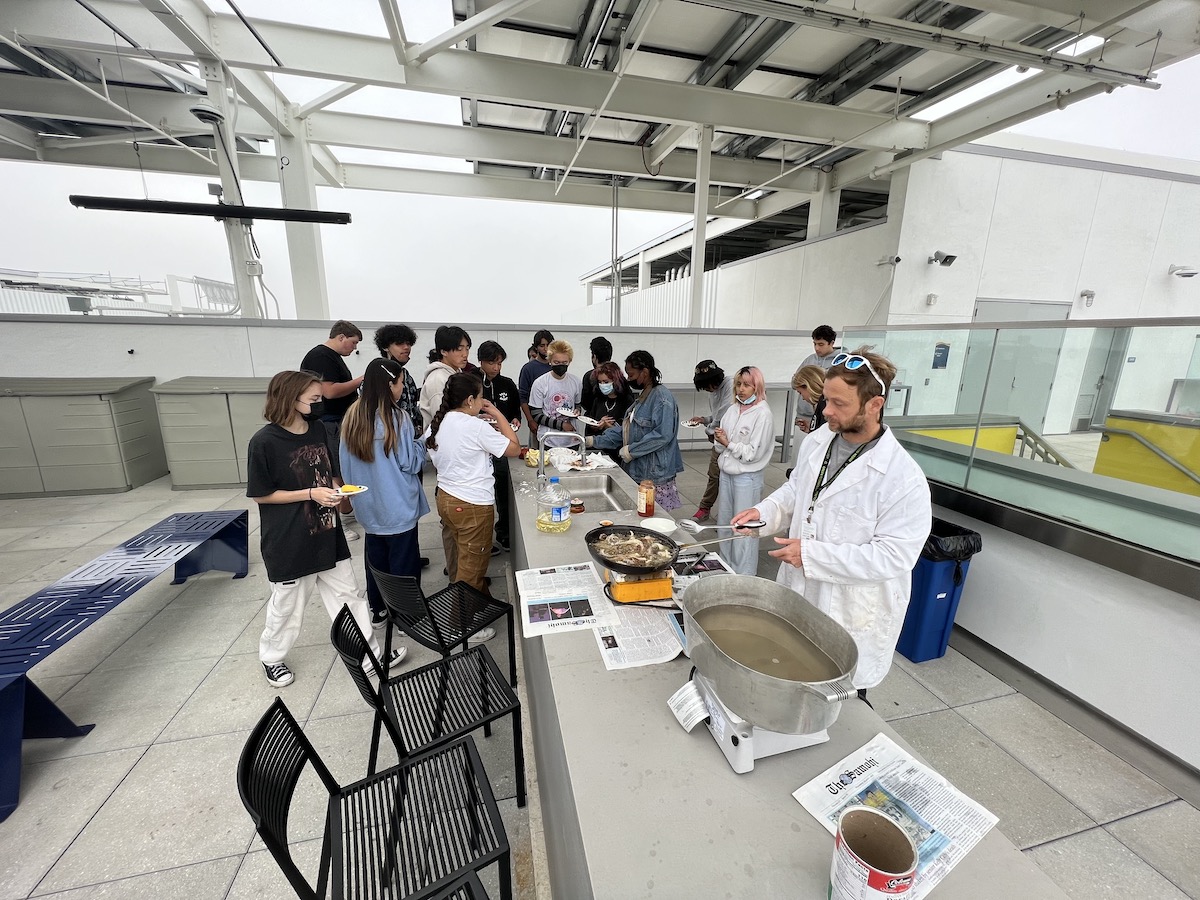 “Kinesthetic and visual parts of experiential learning opportunities are known to bolster student understanding and retention of curricular material. Learning by doing is powerful in this sense,” said Kay. “Students will probably not remember even the best lecture I’ve given this year, but they will probably recall the slimy mantle, sticky suction cups, sharp chitinous beak and the taste and smells of surume squid.”

Kay, who is a life and environmental sciences instructor, as well as on the Santa Monica-Malibu Unified School District (SMMUSD) sustainability steering committee, has been hosting the squid cookout for his students since he started teaching at Samohi. He prefers using fresh squid he buys from Mitsuwa Marketplace, a Japanese grocery store, to make the cookouts more sustainable. Since the students consume their specimens after conducting the dissection with sterile instruments and clean hands, there is little waste. Additionally, there is zero exposure to fixatives and chemicals associated with preserved specimens.

“Dissections are a traditional means in marine science to impart understanding about the internal and external physiology of specimens,” said Kay. “I disliked the chemicals and the smells associated with preserved specimens that my teachers sometimes used, so I opted to buy fresh squid from the market for the past 16 years I have taught at Samohi. After a student found a spare frying pan in the cafeteria my first year, the rest was history!”

With Kay’s guidance the students dissected their squids, learned about different body parts and their functions, played with squid ink and learned how to differentiate a male from a female. Students, then, cut off the edible parts for Kay to prepare and fry for them to eat.

“Even though I thought the entire cookout was amazing, my favorite part would definitely be how hands-on it was,” said Samohi senior and marine biology student, Sophie Salem. “Mr. Kay allowed us to touch all the parts of the squid while learning what every part does, which was really intriguing. I loved being able to eat the squid at the end. We were able to take the squid apart in order to prepare it to eat, which was so much fun!”

Kay explained that in previous years the cookouts were held in vacant lab stations in classrooms, with just the windows open. For those who do not like the smell of seafood, especially not early in the morning, hosting the cookout within the building became a bother.

“The Discovery rooftop is a perfect setting to do our thing while taking in the ocean view,” said Kay. “My students and I are really grateful to have access to the Discovery building, which is proving an ideal setting to learn and teach in.”