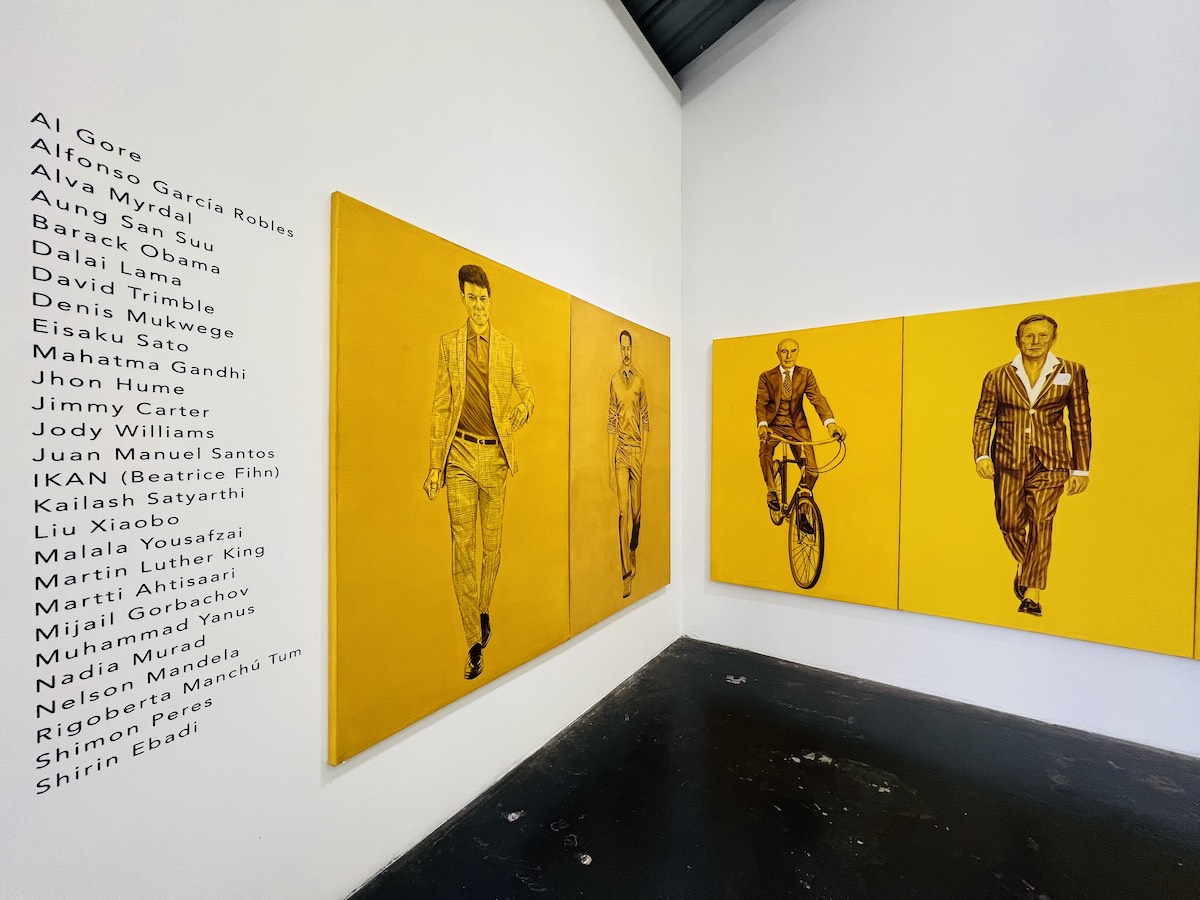 Building Bridges Art Exchange continues to cultivate a diverse art scene, once again bringing culture and meaningful work to its Santa Monica space, which has become a mainstay for both the local community and the greater LA art world. With its latest show, J.J. Martin’s “Role Models,” the museum and curator Marisa Caicholo bring the traveling show (on view through August 6) from the Mexican artist to their loyal and curious community.

As an artist whose own life and strong desire to serve others has always been at the heart of his work, he has spent his life and career searching for ways to meaningfully impact others. This journey led him and his partner to adopt four children, changing all of their lives for the better. Within this process, Martin experienced a turning point, where he and his partner became role models, both to his family and in the LGBTQ+ community as a whole.

“As an artist, I am very grateful for the opportunity Building Bridges has given me here in the city of Santa Monica. To be able to share my latest project with the community has been an honor. I have been working on this project for the past 5 years during the pandemic and it reflects my strong desire to serve others, as my heart has always been at the center of my artwork. I hope this exhibition encourages visitors to re-think about peace and transforms them into role models themselves,” Martin told the Santa Monica Mirror.

This realization fascinated Martin, driving him towards this current collection. Within these works, Martin reflects on the state of the current fast-paced world, where most people are focused on the pursuit of success and material gains and where the failure to meet society’s expectations can have devastating effects on an individual’s life on a physical, social and economic level. He researched the stories of Nobel Prize winners whose exemplary behavior and lives established them as role models in the eyes of regular citizens, particularly the younger generations, ultimately deciding to feature renowned politicians such as Barack Obama or Al Gore, activists like Rigoberta Menchú, Liu Xiaobo, Malala Yousafzai, and other influential figures.

Martin’s new body of work consists of large-scale portraits painted against backgrounds of varying intensity and a subseries entitled “Mandalas,” created with the intention of combining the concept of “Role Models” with the notion of healing society in a post-COVID world. In pursuit of this, he deconstructed each painting from the role model series and created a mandala with the different pieces, each one an entire universe of feelings and healing. Along with this deconstructing of role models on traditional canvases, J.J. Martin also invites people to enter into an immersive experience —specially prepared for the sample— which recreates the experience of visual meditations with mandalas using his artwork.

“Each shape, line or color represents certain aspects of the deconstructed role model, a very unique principle of construction, projection and visual symbolism of everything that I am trying to accomplish in my own life or even, in certain cases, to represent the impermanence of human life.”

Martin is a Mexican artist currently living and working between Mexico City and Los Angeles. His work, which depicts contemporary-looking characters, is an approach to the portrait. For his protagonists in each portrait, he uses models that he finds in daily life or who are extracted from his imagination. Each protagonist acts as a visual representation of an absence or presence.

His use of large format canvases, allows him to make use of his excellent technique, deploy his concepts, and demonstrate his formal and aesthetic expression. He draws and paints his characters on a neutral background, in order to not distract the viewer, and allowing them to concentrate on the main elements.

Building Bridges Art Exchange, established in 2005 by Marisa Caichiolo, the gallery was created as a platform that enables artists from across the globe to connect, engage in peaceful dialogue, and create narratives that explore political issues and social movements which impact different regions of the world. Years later, Building Bridges Art Exchange continues to build and sustain relationships with cultural ministries, museums and other institutions, giving artists all over the world the opportunity to openly explore and influence social and political issues in today’s world.

“Our current space in Santa Monica’s Bergamot Arts Center offers rotating exhibitions from around the world, artist residencies, as well as lectures, and workshops as part of our educational program. In the countries where we send exhibitions, we encourage landscape interventions and performances that engage with the local communities. Diversity is at the core of our organizational values,” the Exchange said.