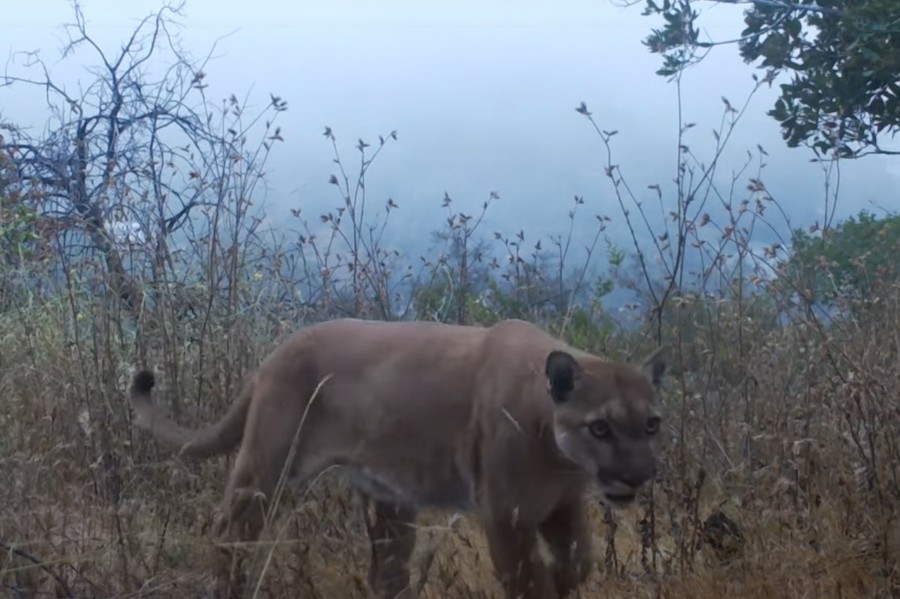 Citizens for Los Angeles Wildlife (CLAW) has released three minutes of new video footage of a mountain lion they have been following through their wildlife cameras since 2017.

The City of Los Angeles is in the final stages of hearings on a pilot Wildlife Ordinance District, the first area in the city where the Wildlife Ordinance will apply, is the same as the home range of this uncollared mountain lion. The video includes CLAW’s first daylight footage of the puma in his natural habitat in Los Angeles. The uncollared male mountain lion’s most distinguishing feature is an L-shaped kink in his tail that is a sign of genetic inbreeding.

This uncollared cougar’s range is in the eastern Santa Monica Mountains between the I-405 and the 101 freeways dividing him at the Cahuenga Pass from the home range of the City’s most famous mountain lion, P-22 (as named by the National Park Service.)  The uncollared puma’s home range includes natural land that is twice as large as P-22’s in Griffith Park but while he still has hubs of natural habitat for his home, his range is shrinking and becoming more severed by development.  National Park Service is among many organizations that have been aware of this puma, whose presence has been spotted throughout the area from Bel Air to the Hollywood Hills through the increased installation of home security cameras and CLAW’s nature cam program.

“I was so excited that this cougar sat down right in front of one of our nature cameras and really let us enjoy his majesty,” said CLAW Co-founder Tony Tucci.  “Our CLAW cams are critical for awareness and evidence of the wonderful remaining biodiversity that lives in our urbanized mountains and why our wildlife habitat needs to be protected. Our major concern is that every new building project in this area might bisect, bottleneck, or worse, completely sever his range. That’s why the City’s proposed ordinance is so important.”

The Wildlife District Ordinance is proposed to protect habitat connectivity in the very same range that this mountain lion, a regionally threatened species, shares with bobcat, gray fox, mule deer, coyote and a vast biodiversity that have also been captured on CLAW nature cams.

“For years in the making already, this city’s Wildlife Ordinance is our only hope to keep all wildlife populations east of the 405 Freeway viable into the future,” said Deputy Director for Natural Resources and Planning for the Santa Monica Mountains Conservancy Paul Edelman. “This is Los Angeles’ only potential tool to save its Santa Monica Mountains wildlife.”

Bruno Naylor, a lifelong resident in the Bel Air area said, “Nature is the luxury we choose to live with up here. When we got an image of that puma on our security camera several months ago we were just delighted to know that wildlife of this kind can still find a home in a city like Los Angeles as the earth is suffering major wildlife extinction. It is time for people to understand that what is left of dwindling open space is more valuable than a bigger and bigger home. I am really hoping the City passes the Wildlife Ordinance so that future building doesn’t continue to block his range let alone all of the other critters we see. If we protect their range up here they won’t get forced into the streets.”