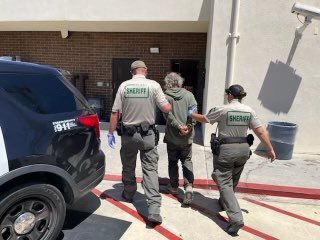 Thomas Aaron Brothers in custody for string of Malibu incidents

A man was arrested in Santa Monica on suspicion of a string of southern Malibu vandalisms.

According to the Los Angeles County Sheriff’s Department, the suspect is 55-year-old Thomas Aaron Brothers. He was wanted for a string of vandalisms in Malibu over three days. During the incidents, Brothers caused damage with a pickaxe to numerous vehicles, front doors of homes and security cameras throughout the city. Two of the incidents occurred on the PCH near Topanga beach, according to the LASD.

On Friday morning, Sheriff’s deputies saw Brothers exiting an LA Metro bus in the area of Ocean Avenue and Colorado Boulevard in Santa Monica. The deputies, along with Santa Monica Police Department (SMPD) officers searched the area of Brothers but were unable to find him.

Brothers was later located by deputies near the California Incline. He fled but was later found in a Santa Monica Beach bathroom around 11:45 a.m.

Deputies arrested Brothers without incident and he was booked at the LASD Malibu/Lost Hills station. He is currently being held on a $20,000 bond.