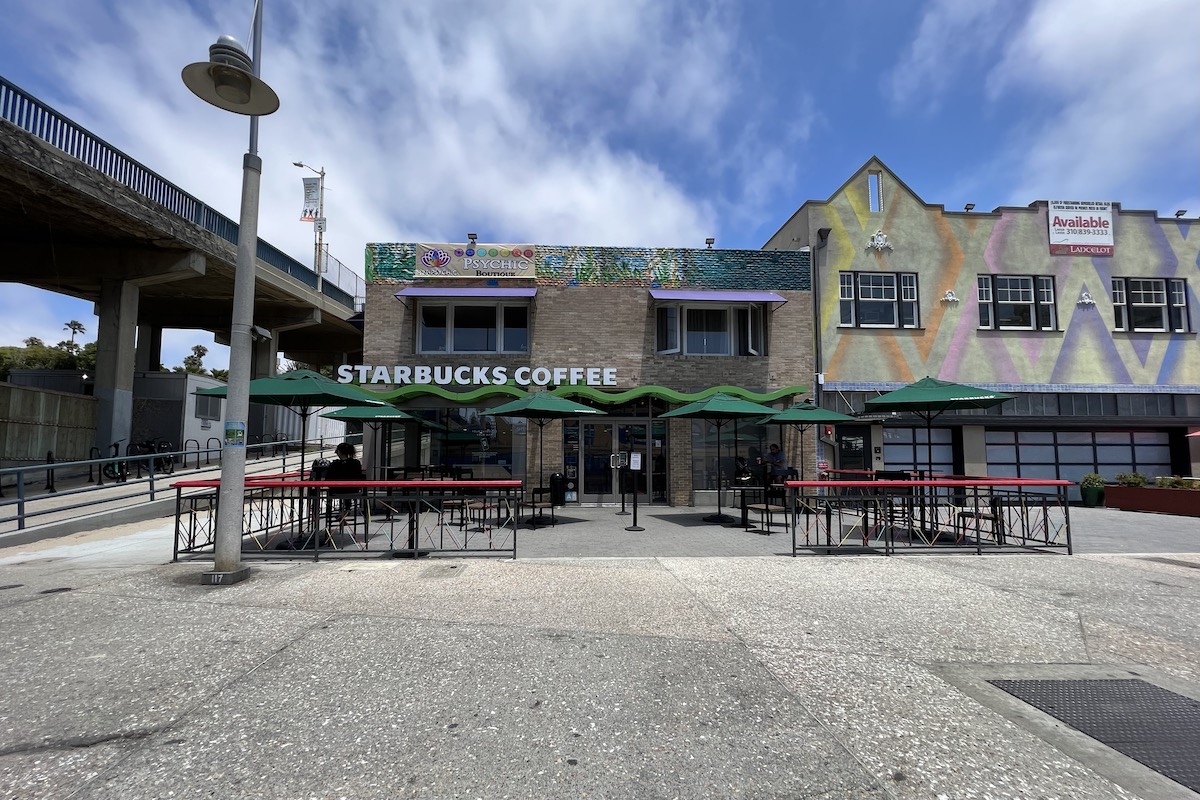 Store under the Pier among 16 closures nationwide

Starbucks is closing six locations in locations in the LA-area deemed unsafe, including a recently-opened storefront at the Santa Monica Pier.

The six stores in Los Angeles are 1st and Los Angeles; 2nd and San Pedro; Hollywood and Vine; Hollywood and Western; Ocean Front Walk and Moss; and Santa Monica and Westmount. Employees at these six high-incident stores will be transferred to new locations. In total, Starbucks announced 16 closures throughout the country. Incidents the company cited as creating an unsafe environment include drug use, assaults and thefts.

The closures come after Starbucks executives sent out two letters addressing safety at its stores.

“It’s clear we’re living in a changing world where economic, societal and operational pressures are colliding. We’re seeing unprecedented cultural division and economic trauma – all while navigating a pandemic, and it seems as though every day there is a new crisis to address,” CEO Howard Shultz wrote in a July 11 letter. “All of this affects Starbucks as a company. And all of this deeply affects millions of customers who visit our stores every day. Our stores serve as windows into America and through them we see the magnitude of the hardships and the ways in which people’s needs are changing.”

“You’ve been open and honest with us about your experience – from what you need to feel your best at work, to the many inspirational and heartfelt examples of how you are creating memorable moments for one another and our customers. You’re also seeing firsthand the challenges facing our communities – personal safety, racism, lack of access to healthcare, a growing mental health crisis, rising drug use, and more. With stores in thousands of communities across the country, we know these challenges can, at times, play out within our stores too. We read every incident report you file – it’s a lot,” Stroud and Nelson wrote.

The company said it put in place measures to address safety in its stores, including increasing training for employees, implementing procedures for addressing safety issues and providing mental health services.

The closures come amid unionization efforts among Starbucks employees across the country. Recently, two Seattle stores that had voted to unionize closed. In addition, the company closed a unionized Ithaca, New York due to “operational problems”.

The company, however, said these closures were not related to the unionization efforts.

“Opening and closing stores is part of our business operations,” a spokesperson for the company told NBC. “This is really rooted in safe and welcoming stores.”

Update: Starbucks Workers United issued the below statement on the closures after this article was originally published.

[Last] week Starbucks announced the closure of 16 stores across the country, citing safety concerns for the closures. Of those 16 locations, two stores successfully unionized in Seattle, the 505 Union Stn and E. Olive Way stores, and the 4th & Morrison store in Portland, OR filed for a union election. Every decision Starbucks makes must be viewed through the lens of the Company’s unprecedented, and virulent union-busting campaign. Starbucks claims that they are closing the stores because they are “unsafe,” yet, the closing of the popular college town store in Ithaca, NY, followed a strike over unsafe conditions. Starbucks’ response was not to fix the problem but to punish the workers who had recently unionized. Yet, Starbucks still argues that this was not a response to the growing union movement spreading across the country. After being charged by the federal National Labor Relations Board with hundreds of law violations including firings, threats, and store closings, the Company’s leaders – Howard Schutlz and Mellody Hobson, apparently believe they are above the law. They will stop at nothing to bust the union. This is a clear way to punish those workers who voted ‘yes’ to unionize and intimidate workers from organizing.