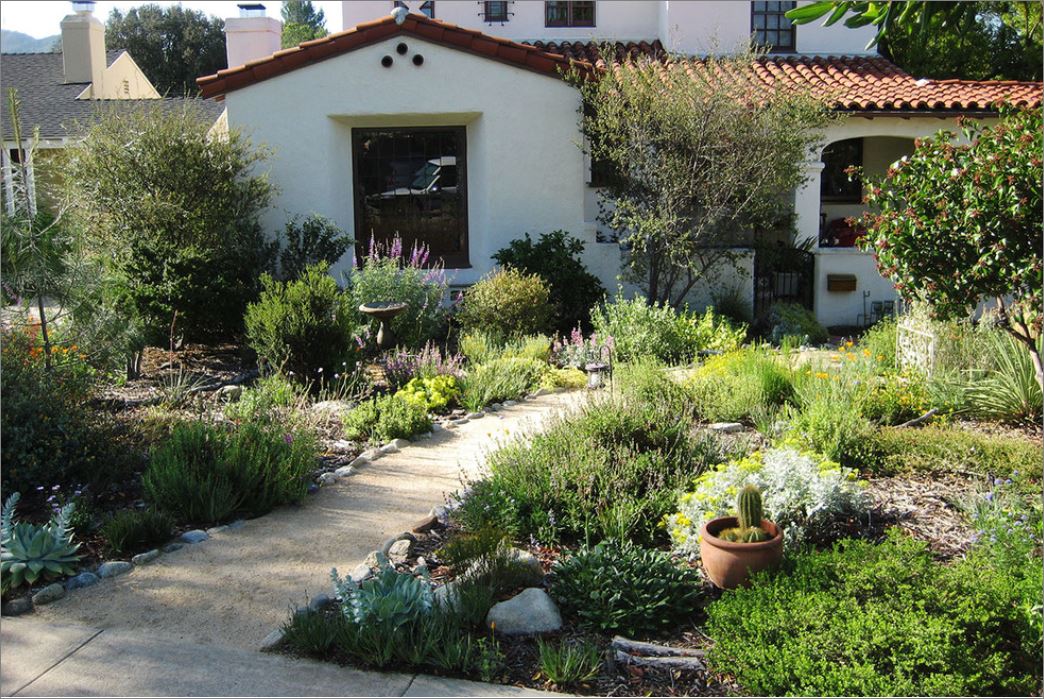 Voltaire said it best at the end of his 1759 novel  Candide: “We must cultivate our own garden”. This simple phrase has special meaning today as the ecological noose tightens with brownouts (1/4 of our City lost power for 4 hours Tuesday), drought (the imposing Hoover Dam hurtles toward functional collapse) and global warming (normally cool London reached 104F degrees this week). Plants are a buffer against all these vicissitudes by providing us shade, food, materials, color, fragrances and the drama of animals among other benefits. They do this by anchoring in the local specific soils and microclimate (yes including fire) a dynamic vortex of pollinators, decomposers, predators, and prey that interact continuously with or without human intervention.

If there were no humans in Santa Monica, left to its own devices, our City would look very much like the native chaparral that we see in the lowlands of the Santa Monica Mountains.

But over the last two and a half centuries we have created an alternate plant ecology whose sustenance requires hard-working graders to relentlessly apply mulch (or its opposite leaf removal), pruning, pesticides, aeration, herbicides, fertilizers and incredible amounts of water. Since all the multiple costs of maintaining this alternate plant ecology keep increasing, particularly as the climate changes,  it quickly becomes unsustainable. Fortunately, we do not need to persist in this losing battle with mother nature. By shifting toward the preexisting plant communities we can get virtually all the benefits of plants without the heavy cost of pretending we don’t live in Southern California.

Native plants are perfectly adapted to our soils and microclimates. They support delicate interlocking communities of molds, insects, and birds among other animals that are, with very modest tuning, infinitely sustainable. Purists pursuing this approach will argue that we should stick only to native plants (however you define native) while others will include other plants from Mediterranean/desert climates, particularly those who want their garden to emphasize food (eg citrus, figs, etc). Plants providing food tend to be water-intensive (almonds need a gallon of water for each nut)  so there has to be a trade-off between the need for food and water availability.

The size of the garden is not important. It can be a small pot of rosemary, sage or oregano on a sunny window sill or can be our biggest park, Palisades Park, which is about 2 miles long and 500’ wide and is a mashup of natives and that biological desert called the lawn. The important thing is that it align predominately as close as possible with native plant communities that have already spent millennia adapting to the available climate, soil and water; including a brief approximately 15,000 years adapting to man’s presence.

In short “our own garden” that Voltaire was referring to should be interpreted as the one that was given to us before there were gardeners. By using that original plant palette as a starting point, we have the greatest chance of using nature’s inherent local tendencies instead of fighting a losing battle to impose a precarious new plant ecology on our urban fabric. Fortunately, today there are many sources of native plants. One of the best is the Theodore Payne Foundation that has classes, a nursery in Sunland and other services to help our gardeners cultivate their own beautiful gardens pictured here. Even a small shift to native plants can substantially increase the sustainability and survivability of our City.