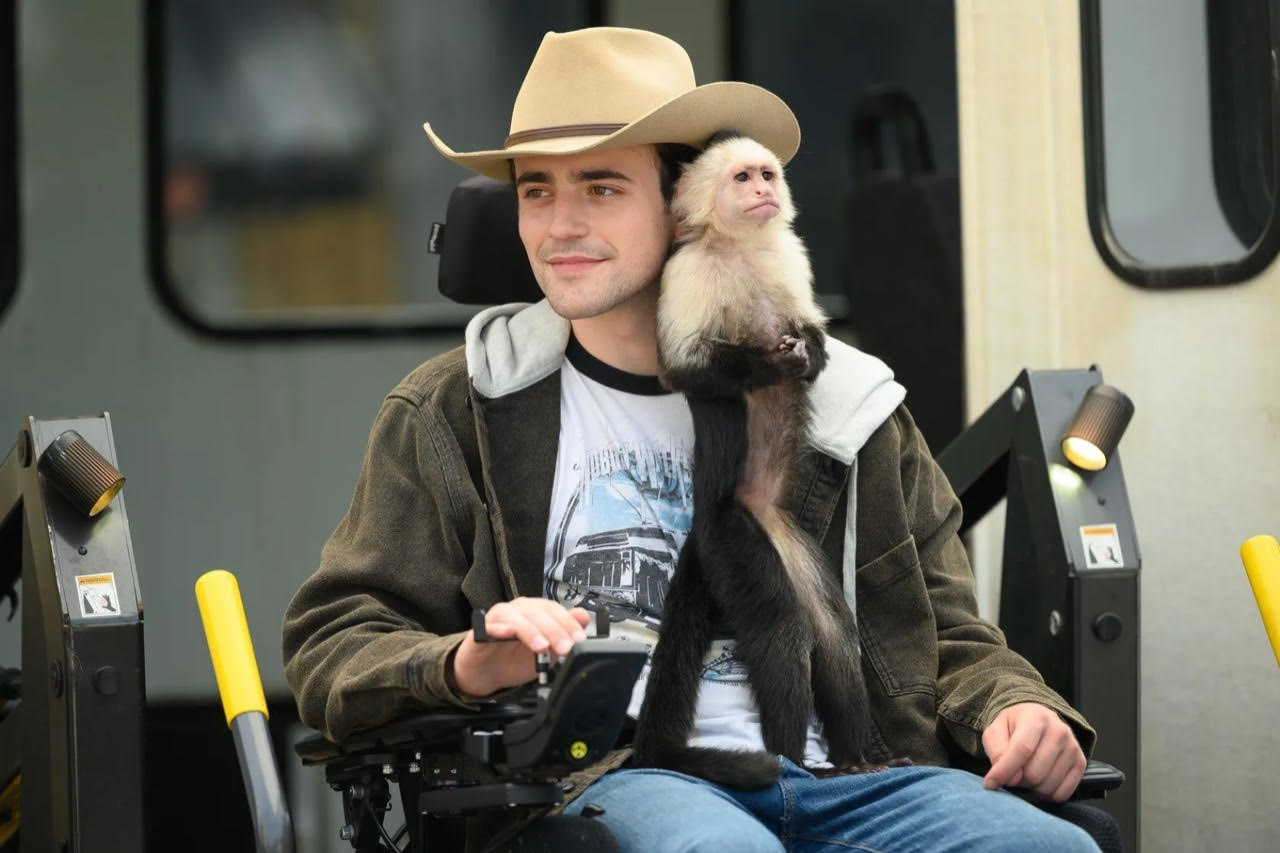 Nick Hamm’s “Gigi & Nate,”  is loosely based on the book by Ellen Rogers, which chronicled  the physical and mental struggles of her son Edward “Ned” Sullivan.  Adapted for the screen by David Hudgins,  this is a compelling film about a young man whose life is completely turned around in what amounts to a nanosecond.

With some establishing shots, the film really begins on July 4th  with  Nate Gibson, superbly characterized by Charlie Rowe, whose performance borders on a tour-de-force.  He is a happy young man planning to go off to college.  His family has a summer house in North Carolina but before he heads off to the lake, he meets Lori, (Zoe Colletti) who works in a store, and invites her to join him for a fun day of swimming and picnicking.  Being a local, she tells him she doesn’t go out with “summer people” but finds him charming and accepts the invitation.  At the lake, he dives off of a steep cliff sinking deep into the water but as he surfaces, there is something wrong.  His hearing becomes muted and he’s having trouble moving his limbs.  Claire, his mom, nicely done by the reliable Marcia Gay Harden, is a fine artist but has not painted in a long time.  At dinner, Nate tells her he has a bad headache and in short order throws up, blacks out, and is rushed to a local hospital in the fictional town of Happy Days.  The doctor gives her bad news. There is swelling in the brain and the prognosis is dire.  Claire arranges for her son to be airlifted to a facility in Nashville which she believes is better equipped to handle what has been diagnosed as bacterial meningitis stemming from his dive into the lake water.  Her son is now a quadriplegic and at this point, surrounded by his family, is in a coma.   His devoted older sister Katy (Josephine Langford) speaks to him:  “Don’t leave Nathanial – You do not have my permission to leave.”  Eventually, Nate is home living in a separate, airy, cheerful room equipped with a special bed and requisite equipment.  He is morbidly depressed and at one point tries to drown himself in their brook.  Mom decides that he needs a service animal which might cheer him up so the entire family, including Nate’s younger sister Annabelle (Hannah Riley,) grandma, Mama Gibson, played by Diane Ladd, and dad, acted by Jim Belushi, who gives the only lackluster performance, all head to “Helping Hands” where monkeys are trained to be service animals.   Nate looks in all the cages with his eyes settling on capuchin monkey named Gigi and although the storyline becomes predictable, the extraordinary relationship that eventually develops between Nate and this service animal, will have you cheering.  Gigi is set up with comfortable living quarters in Nate’s room, but for a long time, does not get off her perch.  Apparently, she had been abused and is fearful so it takes a bit of time for her to become friendly.  Nate is determined to win her over and entices her with peanut butter on his finger.  Being quite smart, our little monkey takes the whole jar and retreats back to her open cage.  In the meantime, Gigi watches as Nate receives painful physical therapy. The other member of the household is Banjo, the family dog, who is not thrilled with the new occupant so at the first opportunity he chases her around the house resulting in total chaos.  Dad comes home to this mess and an argument ensues between he and his wife with him suggesting the monkey be returned to the facility. That doesn’t happen and in short order Gigi begins to assist in Nate’s physical therapy exercises, pushing a ball into his hand.  With a renewed spirit, and help from his monkey, our boy makes excellent, but surprising progress in the use of his hands.  There is one delightful scene where Nate and Gigi are shopping in a market where she gets to pick out the cereal.  It’s a very happy moment.  But alas, a dark cloud appears as animal activist Chloe (Welker White) informs Nate that animals are not allowed in grocery stores or any place where there is food.  Despite mom’s argument that the monkey is a service animal, they are forced to leave the market.  But this is not the end as in a quest to have some fun, our wheelchair-bound boy decides to go to a party to which he is invited by Lori who he met again in the produce section of the market.  He does go.  He drinks a lot and for the first time since the accident, is actually having fun. His sister Katy shows up and admonishes him to which he replies: “I just wanted to go to a party.”  Photos of he and his monkey go viral leading to huge protests by animal rights activists in front of the family home followed by a lawsuit and a potential ruling on the subject. There is a touching scene where Nate gives a heartfelt statement to a panel who will be making that important ruling.

The subject of this film could have been maudlin but instead Hamm, working with a well-written script, elicited excellent  performances and at the same time, illuminated the need for these special caretakers. The struggles of Nate and his family are sensitively captured by Elliot Davis’ excellent cinematography.  So my friends, I leave you with some questions:  What happens to Gigi?  Is she returned to the center?  Does our protagonist ever regain use of his limbs?  Does mom begin to paint again?  What valuable piece of information does grandma give the family?  The answers are in the film which is now in general release.