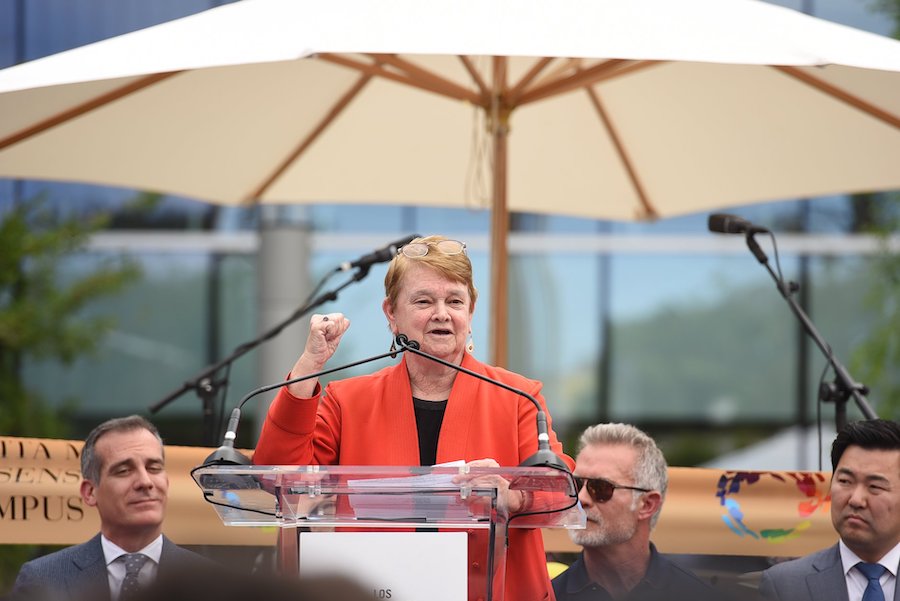 LASD deputies Wednesday searched the home of Kuehl and Sheriff Civilian Oversight Commissioner Patti Giggans, L.A. Metro headquarters, Kuehl’s office and Peace Over Violence, a nonprofit at the center of the Sheriff’s investigation.

The LASD says it is investigating a contract between L.A. Metro and Peace Over Violence to operate a sexual harassment hotline for employees and riders on the Metro trains and buses.

According to a redacted copy of the affidavit that led to the Wednesday morning searches, the LASD is looking into “an allegation of criminal conduct” by Kuehl and three “sole source contracts” awarded to Peace Over Violence. Giggans is Peace Over Violence’s executive director and was appointed by Kuehlto the Sheriff Civilian Oversight panel. Kuehl and Giggans are close friends and have also both clashed with Sheriff Alex Villanueva.
The warrant to search Kuehl’s Santa Monica home –signed by Superior Court Judge Craig Richman – allowed LASD investigators to take any documents or electronic files “related to the Peace Over Violence contract acquisition.” Kuehl represents District 3 on the LA County Board of Supervisors, which includes much of the Westside.

On Thursday, Los Angeles Superior Court Judge William Ryan issued an order blocking the LASD from searching computers seized from Metro’s Office of Inspector General.
Attorneys for Metro contested the legality of the warrants, claiming that a different judge had previously instructed that a special master be selected to review materials seized. In his ruling Judge Ryan set a hearing for next Thursday, posing a series of questions, including why the LASD ignored the previous ruling and went to a different judge to get the search warrants approved.

The LASD issued a statement Friday morning accusing the County of banning the county counsel from representing the Sheriff’s Department relating to matters surrounding the investigation and defense of the three search warrants that were served Wednesday.

“We are now forced into a position of being unrepresented with no county authorization to pay for legal representation and reduced to solicit pro bono representation in this matter,” reads the LASD statement.

Outside of her home Wednesday, Kuehl told reporters the warrant had “no information in it at all” and was “signed by a judge who is a friend of the sheriff’s.”

“This strikes me as being part of a sort of a bogus, non-investigation. There is no investigation going on that would support this warrant,” Kuehl added.

“The only thing they are going to find inside my house is maybe a few cat videos and those kind of things that regular people have,” Kuehl told Fox 11.

Kuehl said she was told by an attorney for the county Tuesday night that the LASD was planning to show up at her home Wednesday morning, as reported by CBS and Fox 11.

She went on to say that LA Metro’s CEO has the authority to approve smaller contracts bringing them to the board.

According to the affidavit, between 2014-2020 a total of $890,000 was awarded to Peace Over Violence in a series of sole source contracts. A sole source contract is a non-competitive procurement that allows a single contractor to fulfill the contractual obligation. In 2020, a Metro employee Jennifer Loew filed a labor lawsuit against Metro alleging retaliation after she claimed misconduct over the way that the Peace Over Violence contract was awarded. Court records show a settlement was reached. As reported by the LA Times, the agreement was for more than $500,000. The settlement has not yet been made final, as reported by Deadline.