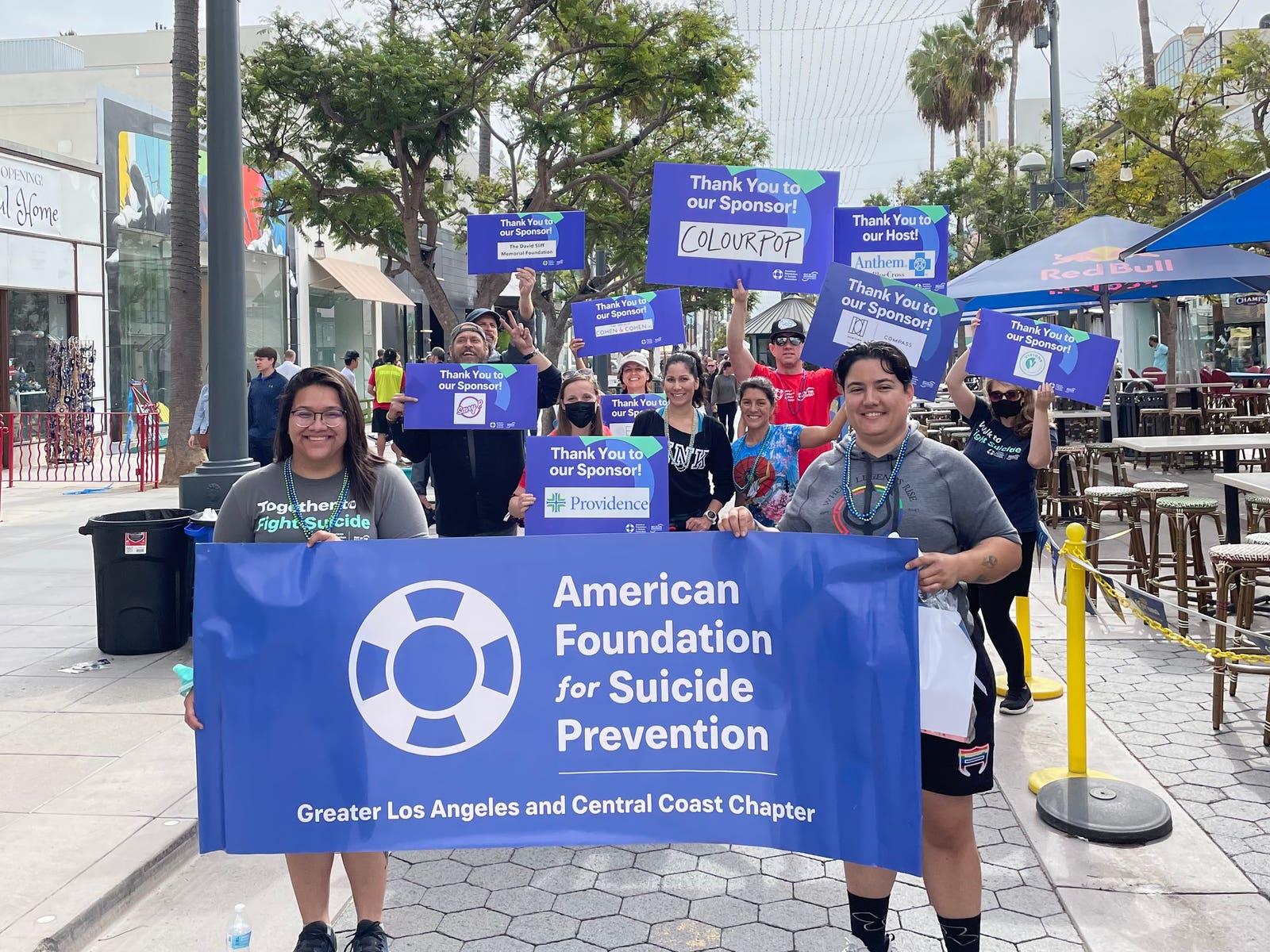 This weekend volunteers from Los Angeles are joining the quarter of a million people walking in towns across the United States to draw attention to the fight for suicide prevention.

The annual Santa Monica Out of the Darkness Community Walk, hosted by the Greater Los Angeles & Central Coast Chapter will be held at 10:00 a.m. October 22 (check in at 9:00 a.m.) at the 1400 block of Third Street Promenade. This walk supports the American Foundation for Suicide Prevention’s public education and support programs, life-saving research and advocacy work at the state and federal levels.

“Suicide touches one in five American families. We hope that by walking we will draw attention to this issue and keep other families from experiencing a suicide loss. Our ultimate goal is to save lives and bring hope to those affected by suicide,” said Louisa Rocque, Executive Director, Greater Los Angeles & Central Coast.

The Santa Monica Out of the Darkness Community Walk is one of more than 550 Out of the Darkness Overnight, Community and Campus Walks being held nationwide this year. The walks are expected to unite more than 300,000 walkers and raise millions for suicide prevention efforts. Last year, these walks raised over $21 million for suicide prevention. The Santa Monica Walk raised over $170,000 and had over 1,000 participants in 2021.

Speakers and musical performances at the Santa Monica Out of the Darkness Community Walk will include Jessica Curry, the American Foundation for Suicide Prevention’s CEO Bob Gebbia, Scott Kirkland (The Crystal Method), Kate Vogel,  X. Ari, Audley, and more. The program’s emcee will be Audacy’s , Ally Johnson , co-host of the Klein/Ally morning show on KROQ 106.7 FM.

“These walks are about turning hope into action,” said AFSP CEO Robert Gebbia. “The research has shown us how to fight suicide, and if we keep up the fight, the science is only going to get better and our culture will get smarter about mental health. With the efforts of our courageous volunteers, and a real investment from our nation’s leaders, we hope to significantly reduce the suicide rate in the United States.”

Fighting suicide doesn’t stop after the Out of the Darkness Walk is over. At 6:00 p.m. PDT on October 22, Audacy’s star-studded We Can Survive concert, returns to the Hollywood Bowl in Los Angeles for its ninth year, with it’s 2022 edition, featuring performances from Alanis Morrisette, Halsey, Weezer, OneRepublic, Garbage, Tate McRae, and more! The concert is part of Audacy’s efforts to elevate a much-needed conversation about mental health and support those who may be struggling. A portion of the concert’s proceeds will be donated to AFSP. Last year, the concert raised over $800,000 for the organization.

“We could not be more grateful for the partnership with Audacy, bringing awareness and encouraging conversation on such an important topic. Music is such a beautiful way of bringing people together. We appreciate all of the artists who are performing encouraging their fans to be open about what they’re going through and to be there for the people in their lives by having a #RealConvo about mental health. We can all make a difference,” stated Louisa Rocque, executive director of the Greater Los Angeles and Central Coast Chapter of AFSP.

To sign up for the Santa Monica Out of the Darkness Walk, please visit www.afsp.org/lawalk. Tickets for Audacy’s We Can Survive concert can be purchased here.