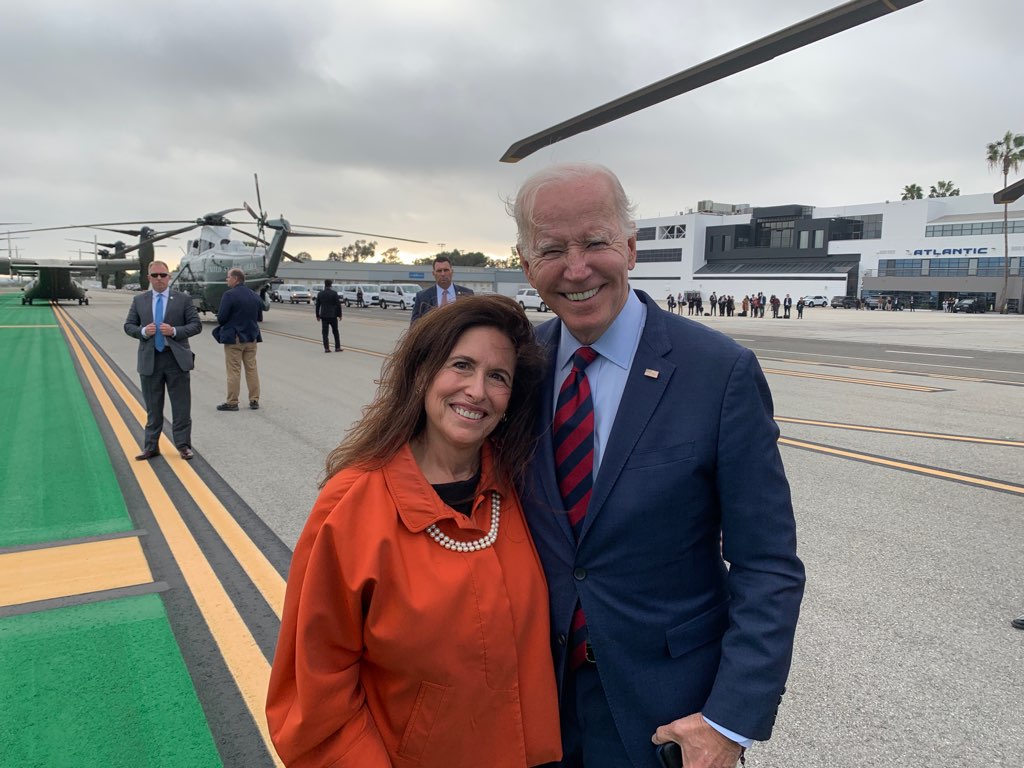 President Joe Biden was in the area Wednesday and Thursday, landing at Santa Monica Airport where he was greeted by Mayor Sue Himmelrich, kickstarting a two-day trip that included a Brentwood fundraiser and a speech at the West Los Angeles VA.

The President landed at LAX on Air Force One Wednesday and then took Marine One to Santa Monica Airport.

On Thursday, Biden began the day at the West Los Angeles VA where touched on a range of infrastructure-related topics, including the Metro Purple Line Extension project currently underway.

“Under Mayor Garcetti’s leadership, you finally got going on extending the Purple Line. You got a big boost in funding from the Infrastructure Law to finish the job,” Biden said. “The extension of the Purple Line is going to add seven new stations, build a reliable high-speed connection between Downtown and the Westside. A trip from Koreatown to the VA campus, which now takes over an hour on a bus — sometimes longer than that — it’s going to shrink to 25 minutes on rail.”

Biden then attended a Democratic Congressional Campaign Committee fundraiser Thursday evening in Brentwood. As reported by Deadline, tickets for the event–which featured an appearance by House Speaker Nancy Pelosi–cost between $5,000-$50,000. The latter price included a photo and reception. With just over a month weeks until the midterm elections, a number of Democratic candidates have come to Los Angeles to raise money. According to the Center for Responsive Politics, “showbiz sources” had contributed nearly $50 million to federal candidates and committees as of September 22, with 87 percent going towards Democrats, Deadline reported.

The President on Friday is expected to travel to Orange County before heading to Portland, Oregon.

Biden’s trip to Southern California is his first visit to the area since June. Ahead of his trip this week he waded into local politics by calling on LA City Council President Nury Martinez and Councilmembers Kevin de León and Gil Cedillo to resign after a leaked recording of racist remarks made by the three was released. The recording was first reported by the Los Angeles Times on Sunday. As of Thursday afternoon, Martinez is the only one of the three to have resigned.

Next week, Vice President Kamala Harris will come to Los Angeles as well, to headline a fundraiser in Studio City for the Democratic Grassroots Victory Fund. The event will take place Monday and will be hosted by philanthropist and commercial real estate business owner Liz Hirsch Naftali.