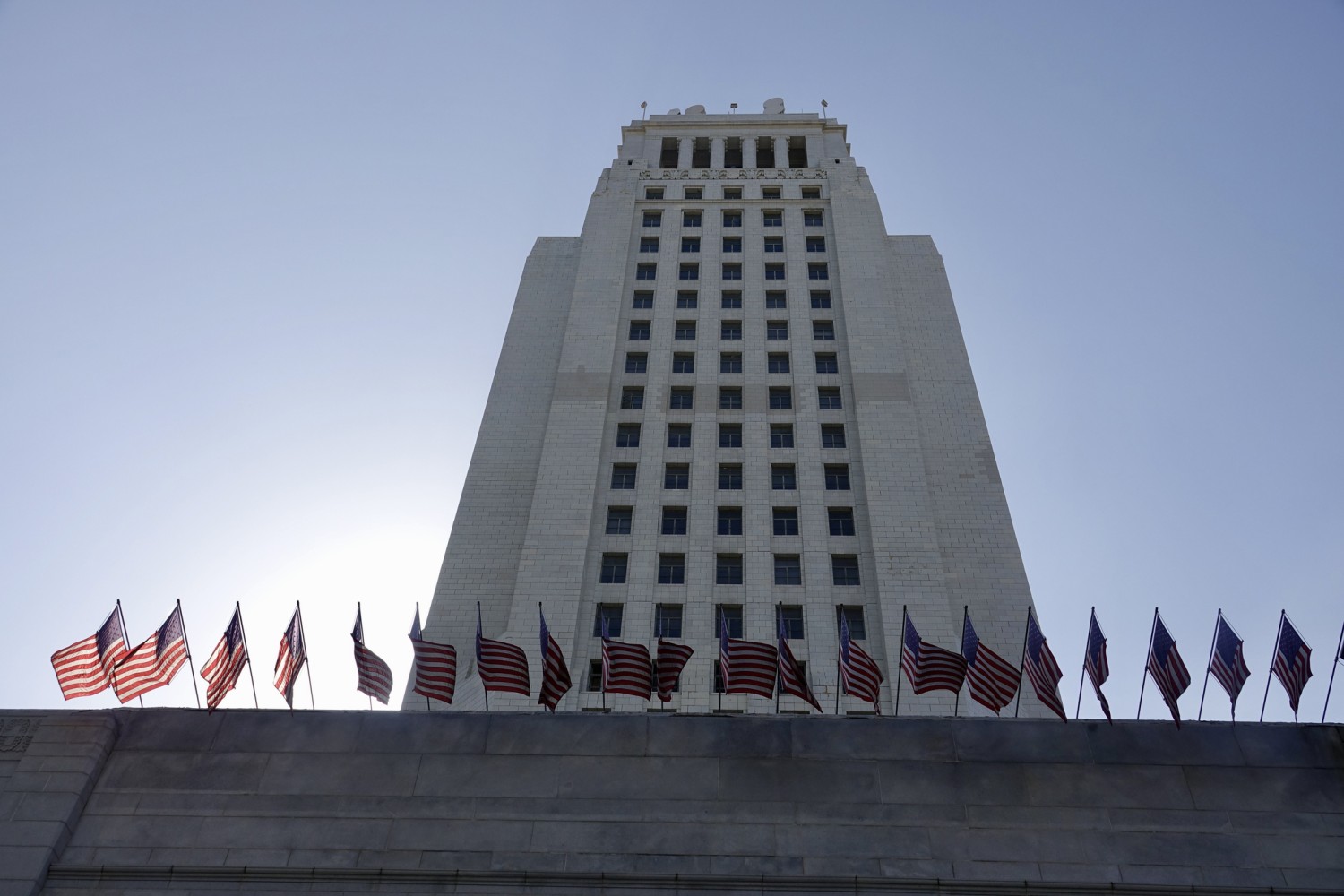 After a blockbuster report from the Los Angeles Times which quoted leaked tapes of LA City Council President Nury Martinez, City Councilmembers Gil Cedillo and Kevin de Leon as they mocked people of color with racist insults, the four are facing repeated calls to resign from City Council. Members of this meeting also disparaged fellow City Councilmember Mike Bonin, threatened to beat Bonin’s young Black son, and disparaged LA County District Attorney George Gascón and City Councilmember Bob Blumenfield. LA County Federation of Labor President Ron Herrera was present and one of the other topics covered in these conversations was their wish to use gerrymandering to consolidate their power and deny other city councilmembers of color the same ability to represent their constituents.

The publication Knock LA posted the recording of the entire meeting on Youtube.

Per a Los Angeles Times report, as of Monday, Nury Martinez has resigned immediately as Los Angeles City Council President. It is not known whether Martinez, Cedillo and de Leon will face disciplinary action or what their future is on the City Council or if Ron Herrera will face censure from the Federation of Labor.

The tapes came from an anonymous account on Reddit that has now been suspended. Nothing is known about the origin of the recordings or who leaked them. The conversation took place in October of 2021 according to the Los Angeles Times.

In the tapes, Nury Martinez says of Bonin’s Black child, claiming that he can’t be controlled, “There’s nothing you can do to control him, callate changuito.” or “be quiet, little monkey” and “parece changuito” or “he’s like a little monkey” repeatedly using Spanish slurs for Black people. She also says of Bonin and his husband, “They’re raising him like a little white kid.”, then, most disturbingly, Martinez expressed a desire to beat Bonin’s son, “I was like, this kid needs a beatdown. Let me take him around the corner and then I’ll bring him back.” Martinez also claims that Bonin treats his child as “an accessory.” which is insulting to Bonin’s identity as a gay man and refers to him as “Su negrito, like on the side.”

When Herrera spoke about Cuban American LA County Attorney George Gascón in the meeting, Martinez cuts Herrara off by saying, “Fuck that guy, he’s with the Blacks,” as quoted by Knock LA.

After the tapes were revealed, all three of the councilmembers issued statements seeking forgiveness for their words and actions. At first, Gil Cedillo claimed to not remember the conversation but later issued this statement, “While I did not engage in the conversation in question, I was present at times during this meeting last year. It is my instinct to hold others accountable when they use derogatory or racially divisive language. Clearly, I should have intervened. I failed in holding others and myself to the highest standard. The hurtful and harmful remarks made about my colleague’s son were simple [sic] unacceptable,” as quoted by ABC 7.

Kevin de Leon’s statement said, “There were comments made in the context of this meeting that are wholly inappropriate; and I regret appearing to condone and even contribute to certain insensitive comments made about a colleague and his family in private. I’ve reached out to that colleague personally. On that day, I fell short of the expectations we set for our leaders — and I will hold myself to a higher standard,” as quoted by The Hollywood Reporter.

Nury Martinez has issued not one, but two statements trying to explain her words and actions, the second statement, issued today accompanied her announcement that she was stepping down as City Council President, as quoted by The Los Angeles Times, “I take responsibility for what I said and there are no excuses for those comments. I’m so sorry.

I sincerely apologize to the people I hurt with my words: to my colleagues, their families, especially to Mike, Sean, and your son. As a mother, I know better and I am sorry. I am truly ashamed. I know this is the result of my own actions. I’m sorry to your entire family for putting you through this.

As someone who believes deeply in the empowerment of communities of color, I recognize my comments undercut that goal. Going forward, reconciliation will be my priority. I have already reached out to many of my Black colleagues and other Black leaders to express my regret in order for us to heal.

I ask for forgiveness from my colleagues and from the residents of this city that I love so much. In the end, it is not my apologies that matter most; it will be the actions I take from this day forward. I hope that you will give me the opportunity to make amends.

Therefore, effective immediately I am resigning as President of the Los Angeles City Council.”

Ron Herrera, LA County Federation of Labor President issued a statement that said, “for my failure to stand up to racist and anti-Black remarks in that immediate moment,” adding that “there is no justification and no excuse for the vile remarks made in that room,” despite the fact that in the recording he compares Bonin’s treatment of his son as that of “putting him out in public like a lawn jockey,” as quoted by The Los Angeles Times.

While discussing City Councilmember Marqueece Harris-Dawson’s district, Martinez said he should, “Go get the airport from his f—-ing little brother. That little b—h Bonin.” Martinez also called Mitch O’Farrell “a diva” and said of City Councilmember Bob Blumenfield, “Fuck that dude,” as quoted by Knock LA.

During the meeting, the group speaks about the importance of consolidating their power in the City through gerrymandering. Martinez speaks of the importance of denying City Councilmember Nithya Raman of control of the entire Koreatown district by saying, “I told her that’s not happening. You’re going to get the district that you’re going to get. You’re going to have to run. And probably in a district where more than half of them don’t know who you are. Go f— do the work and see if you can get re-elected. Our commitment is not to re-elect her,” while questioning Raman’s competency to represent a mostly Latino community as quoted by the Press-Telegram

Martinez went on to derided Oaxaxan residents of Koreatown, calling them short dark people, saying that she doesn’t know what village they are from, and calling them “tan feos” in Spanish which means ugly. Kevin de Leon stated that Raman’s district is “the one to put in the blender and chop up, left or right,” and Cedillo agreed as quoted by the Press-Telegram.

The group concurs that Heather Hutt, who was later appointed to represent Mark Ridley-Thomas’ district while he is suspended and under federal indictment, would be loyal to them and was the one for the job. Herrera spoke up about the need to protect City Councilmember Mitch O’Farrell in his bid for re-election against Hugo Soto-Martinez and compares Soto-Martinez to Eunessis Hernandez who recently won the election in Cedillo’s district and will replace him. Cedillo said, “One devil and another devil,” according to The Press-Telegram.

Both Mitch O’Farrell and Heather Hutt have issued condemnations of the four officials on the tape. Hutt, along with fellow councilmembers Marqueece Harris-Dawson and Curran Price, released a joint statement that said that this was, ‘“a very dark day in LA politics for African-Americans, the LGBTQ+ community, Indigenous people and Angelenos who have put their faith in their local government,” and that a “facade” had come crashing down, as quoted by PBS.

Mitch O’Farrell specifically called for the resignation during a speech that was posted on his Twitter account. Mike Bonin issued a statement calling for the four to resign or be removed from office. Nithya Raman also called for the resignation of the officials involved also on her Twitter feed where she also sent love to Mike Bonin and his family. Marqueece Harris-Dawson also called for the group’s resignation as well during a press conference where he said, “We can’t have a city council where every day we go in there’s someone sitting there who called a black child a monkey.”

In a late-breaking update: The Los Angeles Democratic Party has called on all three City Council members to resign. Their statement says, in part, “The hateful comments aimed at an innocent child, the attempts to divide and destabilize Black and Brown communities for the sake of power, and the slurs hurled at our Asian-Pacific, Indigenous, Armenian and LGBTQ communities were not only appalling but unbecoming of those who the people have trusted to lead…Today, we’re calling on the resignation of Councilmembers Martinez, deLeon and Cedillo so that Los Angeles can begin not only a healing process but use this moment to reevaluate and identify appropriate steps to put the power back with the people.”