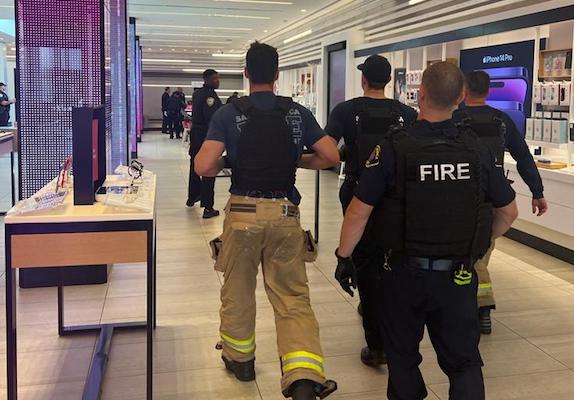 The T-Mobile store on the Third Street Promenade was evacuated Wednesday after a man in distress pulled two knives on Santa Monica police officers, before eventually turning himself to crisis negotiators.

According to the Santa Monica Police Department, on October 26, 2022 around 12:50 p.m., officers were dispatched to what originally was reported as an armed robbery at 332 Santa Monica Boulevard. Officers, arriving in less than two minutes, were told by witnesses that a man armed with a sharp object, went into a store acting hysterical and asking for help. The male ran out before police arrived.

SMPD personnel soon after observed the described man go into the T-Mobile store nearby on the Third Street Promenade.

“When they attempted to make contact with him, he pulled out two knives. Officers were able to safely evacuate all the store’s employees and customers,” the Santa Monica Police Department (SMPD) said in a press release.

According to the SMPD, members of the Crisis Negotiation Team (CNT) responded and talked to the man as he barricaded himself in the back of the store.

At around 1:20 p.m., CNT personnel were able to negotiate with him to safely surrender the knives and turn himself in.

The man was transported to a local hospital for a mental health evaluation, according to the SMPD.

According to the SMPD, no charges will be filed.

“Because he was suffering a mental health crisis, he was placed on a hold, the SMPD said.