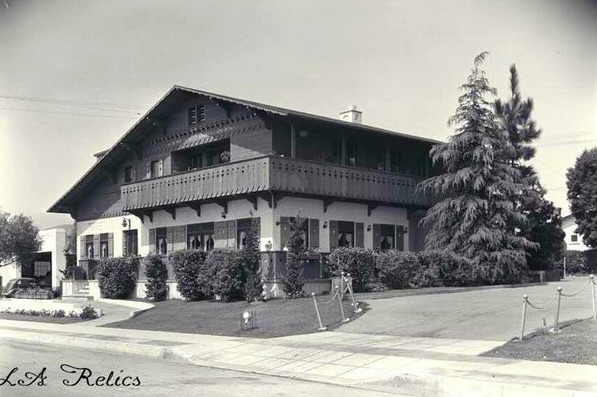 When I read that Madame Wu passed away after so many years, it sparked a bit of nostalgia in me. There were many original and iconic businesses in past times, some of which are still here, but most have been replaced for one reason or another, some good, some bad. Take on Wilshire Blvd, for example (there were many others in downtown SM and on Main Street, Pico Blvd., and Santa Monica Blvd. as well).

Madame Wu started out at Wilshire Blvd and Princeton as Madame Wu’s Garden serving about 50 people, and then, due to her unique menu and celebrity status; she relocated into a much larger freestanding building which was once the Swiss Chalet Café, with celebrities frequenting there like Princess Grace of Monaco, Paul Newman, Elizabeth Taylor, Carey Grant, George Burns. Ronald Reagan, Robert Redford, and Jane Fonda, just to name a few. What a success and empowerment story her life was on so many levels; it really hits the mark and is even more relevant today.

If you look at the photo, can you just imagine what it must have been like then? Now we have big box retail Whole Foods there, which provides a well-needed community service, but like so many new commercial developments, they speak more to big corporate commerce and less about unique style and architecture. On the opposite side of the street was the Branding Room, a popular Steakhouse, piano bar, and lounge, now Earth Wind and Flower, and that building still stands. There was Jack’s at the Beach, then Pacific Dining Car, which will now be a 24-hour Emergency Pet Hospital since they shuttered up a few years ago.
We still have a few hangers-on like Snug Harbor, an authentic little 40’s style café with outdoor patio seating in the back, a place for the “regulars” and newcomers alike. It and other vintage local spots are a refreshing and warm place to be for the same reason the original Farmers Market in Los Angeles on Fairfax and 3rd is still standing and operating much like it always did with many of the original family-run businesses still there. We could learn something from that!

I recall the Ball on Wilshire, a topless restaurant and bar which finally closed in the early 80s..that was one ugly Dinosaur that finally sunk into the tar pits!

Of course, there is a need for positive change and growth in response to population and societal demand, and that’s a good thing, and to be clear, there are numerous single story buildings on Wilshire that have degraded, are functionally and economically obsolete, and are strong candidates for re-development and transformation. There is an opportunity now to create a better Boulevard that reflects the 21st Century but in a way that preserves the essence of Santa Monica’s history and not by simply replacing or redeveloping these buildings with “copy-paste” architecture, just a mass of cold concrete and steel, with metal and wood cladding.

The primary point is that we have a dangerous trend and emphasis on non-master planned and unsupported growth for the long term than anything else at the expense of some of the unique places and family-run businesses that we are and have been known for.

Reality check: Where will Santa Monica get the financial ability without creating additional debts and burdens on small businesses to upgrade the required infrastructure, police, fire, and maintenance services? There is no doubt that these are already challenging times on that front, and the pressure is being felt mostly by local, privately owned, family-run businesses that can barely hang on in some cases.

Places, for example, like Big Jo’s Hamburgers, are being replaced by corporate businesses in Santa Monica like Shake Shack, which can well-afford current high market rents. New development does not provide an economic opportunity for relocation for affordable businesses or perhaps staying in the new project if it makes sense. Funky places like Wildflower Pizza on Main St., with its sawdust floors and unique beach vibes, were closed and “upgraded” to Ashland Hill, which is a nice venue but so generic like many other places. We should consider providing economic protections for qualified and established family-run businesses instead of continuing to lose or running them out of town.

Look back for a moment and remember that Santa Monica started out as a beach town and resort with getaway beach cottages and homes for Angelenos and out-of-towners. It was a laid-back beach town at its core. Starting in the early 1900s, when amusement parks and attractions were popular, Santa Monica started bringing in vacationers and well-heeled Easterners looking to resettle in The West.

Tourism was (and arguably still is to a large degree) Santa Monica’s base economy. There was a slowdown during the Great Depression, but after that, Santa Monica slowly but incrementally transformed into a more modern and developed city over the remainder of the 20th century.

McDonnell Douglas built planes as a part of the war effort (WWII), employing over 40,000 people. The Post-war boom and demands for aviation kept this industry very profitable and supported major economic growth and expansion.

Also, tick-tock about twenty years later and the completion of the Santa Monica Freeway for the first time connected Downtown Santa Monica Los Angeles County’s freeway system, increasing access and traffic volume to and from Santa Monica almost immediately. This was a huge contribution to the exponentially increased growth which took place for the next twenty-five years or so, laying the groundwork for what our city has become today.

I recall in the 1980s, the city’s full support of development and improvements in the downtown area. For many years, this growth and development continued to bring prosperity. But today, Downtown Santa Monica is a suffering business district, inflated and staggering, saturated with vacancies and increased crime issues as small, local, ‘mom & pop” businesses are being driven out with increasing rents and displacement by national chain stores and a lack of vision in our leadership.

What will happen next? The Downtown and all our main arteries are critical and will be of major impact and concern to most local businesses and residents, including visitors and tourists. The brakes should be put on for now on major future major development here. Instead, let’s focus on and incentivize repurposing existing commercial property where it’s warranted and be guided by what made us a unique and special place! It’s as simple as that. Our past is a wise teacher of not only what worked but what still can, given direction by a formative and balanced Master Plan of the entire city.

It is much more intelligent to quality control buildings, traffic flow, and architecture before the fact rather than wait and then later be forced into second-best solutions because we lacked the vision or were swayed by external economic interests. We need our government to be truly smarter than that.