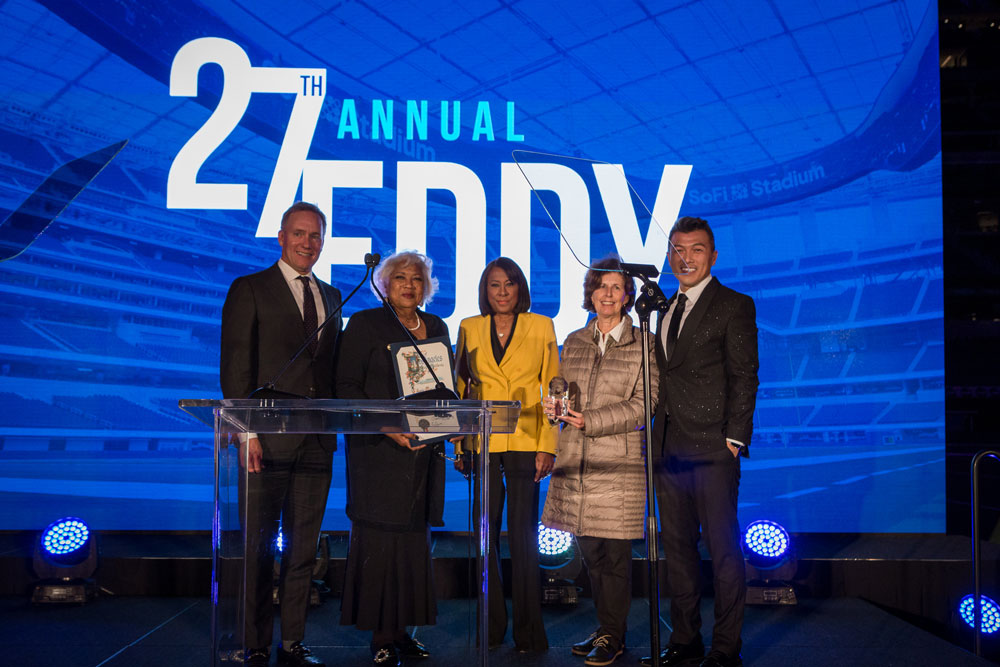 Alongside SMC, LAEDC also honored its own CEO Bill Allen as its Individual Honoree; Stan Kroenke, with his Los Angeles Rams, SoFi Stadium and Hollywood Park as Corporate Honoree; in addition, the cities of El Segundo and Gardena & Santa Clarita (tie) were named winners of the Most Business-Friendly City awards in the population under 60,000 and population over 60,000 category, respectively, during the live-streamed ceremony.

Speaking at the gala, SMC Superintendent/President Dr. Kathryn E. Jeffery said that winning what amounts to “the Oscars of the business community” was an honor, to be distinguished out of over 80 colleges and universities in Los Angeles. “Santa Monica College’s business partners report that we are ‘The best among the best,’” Dr. Jeffery said. “We offer 115 degrees and certificates across [dozens of] industry sectors and many more. We serve students from over 100 countries!”

She also went on to thank the LAEDC and industry partners, and stated that SMC students’ lived experiences were “an asset.” “Don’t think twice about hiring our community college students to meet your workforce demands!” Dr. Jeffery urged business leaders.

“To be recognized for outstanding leadership in economic development is the highest honor for Santa Monica College faculty and staff who work so hard to align our programming to the demands of the Los Angeles region,” said SMC Dean of Workforce & Economic Development Dr. Patricia Ramos. “We are honored indeed to receive this one!”

“Each year, the Eddy Awards recognize the incredible work that often happens behind the scenes throughout Los Angeles County. The Los Angeles region continues to grow as a powerhouse economy, not just in California but across the nation and the globe. These honorees are part of a network that tirelessly moves the regional economy on an equitable and sustainable path,” said Stephen Cheung, COO of LAEDC in a Sept. 1 press release announcing the honorees ahead of the Nov. 9 celebration. “We recognize the massive work done by these honorees for the local economy and its recovery from the pandemic while they become more innovative, resilient, and sustainable.”

Since 1996, the LAEDC Eddy Awards® celebrates individuals, organizations, and educational institutions that demonstrate exceptional contributions to inclusive economic development in the region. “Economic development is a team sport, and for 27 years, the Eddy Awards have highlighted some of the most valuable players in the region,” said Bill Allen, President, and CEO of LAEDC.

Individual Honoree Bill Allen was recognized for how, in 17 years as President and CEO, he transformed the LAEDC’s mission and programs, establishing partnerships with key public and private stakeholders to advance a more robust, equitable, sustainable, and resilient economy for Los Angeles County. LAEDC’s Corporate Honoree Stan Kroenke and The Kroenke Group was recognized for developing the largest sports and entertainment complex in the country in Inglewood, California, leading to the opening of SoFi Stadium in 2020. This development brought two NFL teams to Los Angeles, provided billions of dollars in investments, and created thousands of jobs in the Los Angeles County region. The Most Business Friendly Cities of El Segundo, Gardena, and Santa Clarita were recognized for creating environments that foster the creation and growth of enterprises that provide good jobs and build wealth for communities.