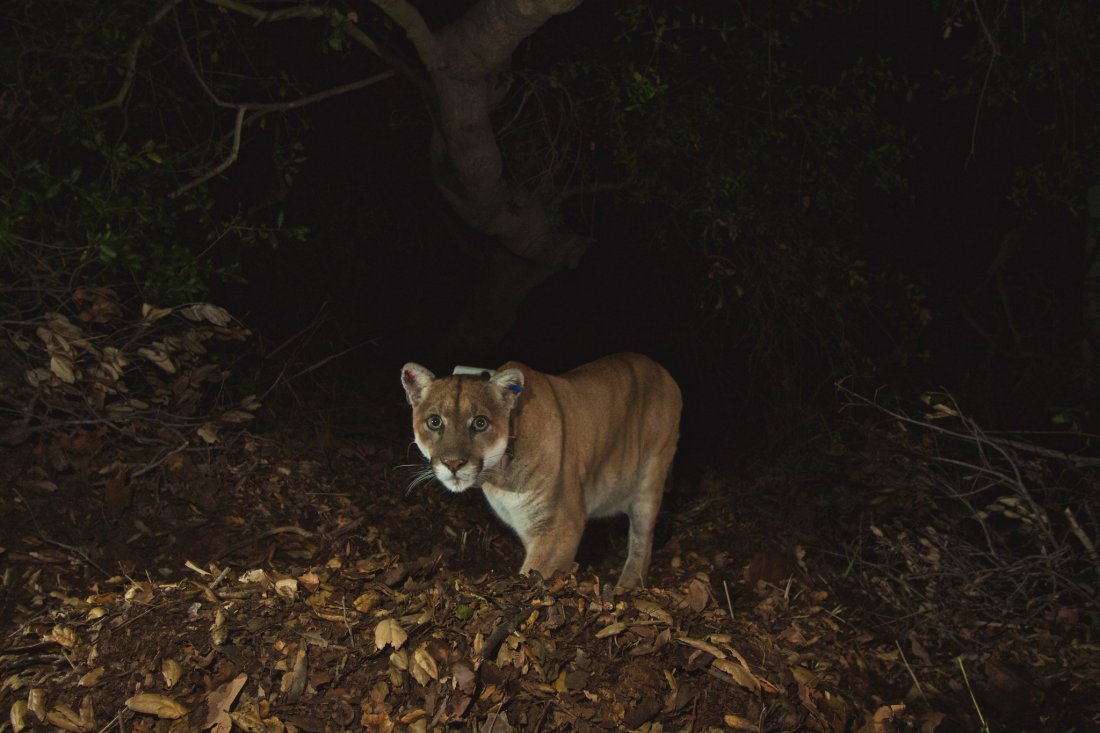 The California Department of Fish and Wildlife (CDFW) and National Park Service (NPS) recently tranquilized the mountain lion known as P-22 and transported him to a wild animal care facility for a full health evaluation.

On December 8, CDFW announced their intent to capture the world-famous mountain lion and bring him in for a health evaluation. CDFW and NPS found P-22 the morning of December 12 south of his long-time home range in Griffith Park, in the Los Feliz area. An anonymous report Sunday night indicated that he may have been struck by a vehicle.

According to Ed Pert of the CDFW, P-22’s behavior had changed recently, having taken to chasing and attacking dogs on leash. Last month, the NPS confirmed that P-22 killed a chihuahua on a leash in the Hollywood Hills.

“That is something that has never been seen in the years he has been tracked by the NPS,” Pert said during a press briefing this week.

In addition, Pert noted that P-22 was spending more time in urban areas and going deeper into urban areas such as Los Feliz and Silverlake.

“It was becoming clear to biologists that P-22 may be in distress. He’s a relatively old lion at 12 years old and we don’t know if that behavior is because he is just getting older and couldn’t care for himself in the way that he has in the past or that there was something that could have been wrong with him so,” Pert said. “He just wasn’t thriving out in the wild any longer and the [CDFW] was concerned for both P-22’s health and the health of those community members living around P-22. We thought it was a good idea to try to capture P-22 and take a look and do a health assessment.”

NPS biologist Jeff Sikich said that they set no traps to catch P-22. Instead, upon determining where he was through the GPS locations and signal from his tracking collar, biologists darted him in the backyard of a Los Feliz home.

“We entered the backyard where he was. There was an extremely thick brush in that area. You couldn’t see 10 feet in front of you where he was hiding. I would think he felt safe and secure in this spot. We were able to approach him pretty quickly, he was alert and knew we were there. He stood up, walked a couple of places, and hunkered down. Then we were able to get in there quietly and use a tranquilizer dart with a CO2-powered rifle, lob a dart into his hindquarter. He didn’t run, he stayed put, which was great,” Sikich said. “It went completely smooth as far as the capture goes. We immediately put him on a carrying tarp and brought him into the carrying crate where he was in an enclosed vehicle and went to the facility for a full health assessment.”

According to the CDFW, initial examination findings showed that P-22 is significantly underweight, has a thin fur coat, and has a right eye injury, most consistent with recent vehicular trauma. He was given fluids with vitamins to correct dehydration, anti-inflammatory and antibiotic medications for the eye trauma and anti-parasitic drugs. He recovered smoothly from anesthesia and was taken to a veterinary medical health hospital experienced in the care of wild animals for monitoring and further veterinary evaluation.

“It may take a few weeks to determine which way he is going to go,” said Deana Clifford, a Wildlife Veterinarian & Epidemiologist for the CDFW. “We are trying to give the cat time to speak with us. Not verbally but by watching its behavior, monitoring its health, and make that decision as best we can with all the information we have at hand.”

During the media briefing, Pert said that it is unlikely P-22 will be released back into the wild given his current condition.

“At the moment, it is not likely P-22 will be released back into the wild based on his current weight and the other issues that he seems to be facing but we are trying to leave all options on the table,” Pert said.

If P-22 is not released back to the wild, it could be placed in a wildlife sanctuary. Mountain lions, however, do not do well in captivity, so Pert said euthanization is also possible.

“It’s not only a scientific issue, unfortunately, but there are emotions rolled up in this as well. We have to do what’s best for P-22,” Pert said. “We all understand P-22 is a special animal. We have grown to follow P-22, care about P-22, and this is not any sort of action – no matter the outcome – that we take lightly.”