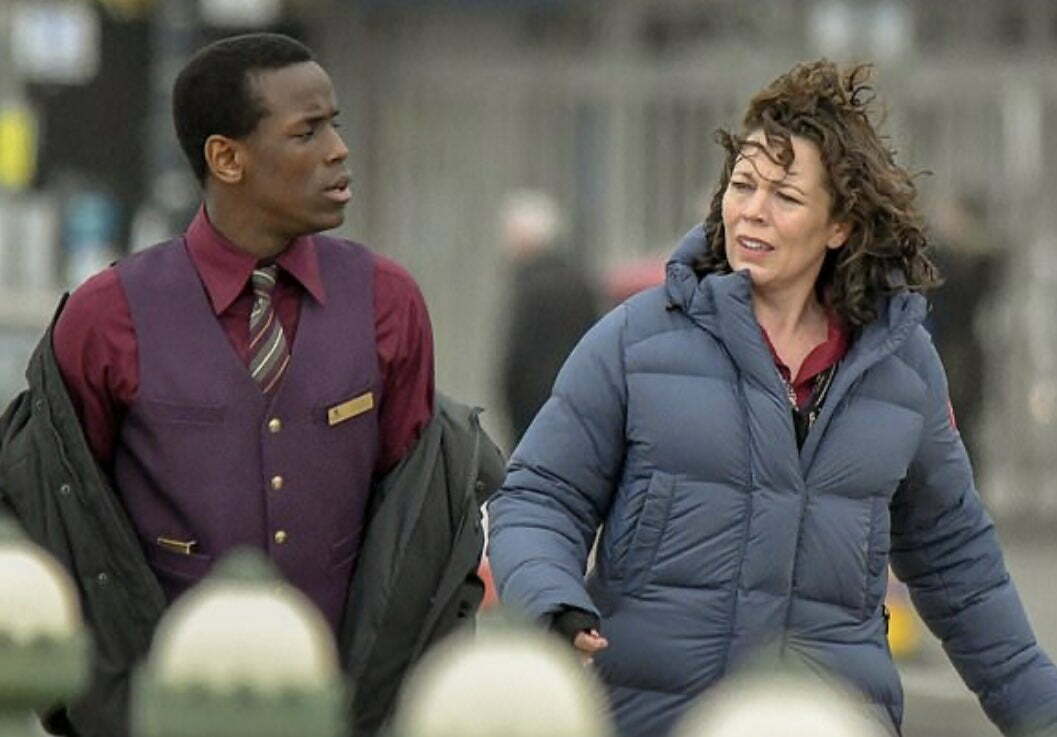 Here is another movie by a remarkable director for whom the isolation of the pandemic of 2020-2021 brought deep contemplation of his life, of our relationships with people, and the landscape and art around us. Sam Mendes’ first feature as a director was American Beauty, one of my all-time favorites. Mendes describes the years of lockdown as “a strange and lonely time and a time of reflection,” during which he was inspired to write the script for Empire of Light, about his upbringing by his single mother, He was an only child who was brought up alone by his mom while she was battling mental illness. The character “Hilary” is based on his mother, and he had Olivia Colman in mind for the role as he was writing the script.

This is a poignant story about loneliness and connection set in the small seaside town of Margate in southwestern England. Kent’s 2-story grand Dreamland Cinema is similar to one in a town that Mendes used to visit as a child. Margate is said to have some of the most beautiful skies in Europe, as the view of the ocean there points north. The painter JMW Turner painted many of his light-infused canvases on its beach. Don’t expect an action thriller here. Mendes takes his time establishing the setting and characters, so just sit back and enjoy it. The story takes place in turbulent recession years of 1980-81 but the narrative is universal. History does tend to repeat itself.

Colman and Micheal Ward play two people who are introverts at heart, working at a struggling movie theatre. They find connection in a secret place, the once opulent top floor of the theatre, now deserted, in ruins, inhabited by pigeons, a relic of a bygone time. This becomes their “Secret Garden” so to speak, where they can escape from the world. Olivia Colman is one of those actors who has played so many iconic roles, yet she is able to make each character uniquely human and present. Her Hilary painfully navigates an appearance of normalcy through a mind beset with afflictions so severe that she fears immersing herself in the experience of watching a movie. Ward, an award-winning young Jamaican actor, delivers a sensitive performance as “Stephen.” Hilary’s struggle with mental health directs the trajectory of her life, causing the people around her to fear to connect with her. As a black man in a racist society, Stephen struggles with social acceptance, and their story is about not giving up on yourself or others.
The incomparable cinematographer Roger Deakins brings these light and dark aspects home and frames the scenes with an architectural eye. The soundtrack and music choices by rockers Trent Reznor and Atticus Ross bring a timeliness and poignant emotion to the setting.

Perhaps incidentally, or perhaps by design, “Empire of Light” echoes the title of a series of paintings by Rene Magritte, painted in the early 1950’s which have a distinctive mismatch of lighting. The houses and streets on the ground hide in deep nocturnal shadows, in contrast to the skies above which are bright blue with sunlit clouds. The artist himself described the images as “things I thought of…a nocturnal landscape and a skyscape such as can be seen in broad daylight…This evocation of night and day seems to me to have the power to surprise and delight us. I call this power: poetry.” Mendes’ Empire of Light suggests that type of poetry, the darkness of mental anguish contrasted with the light of friendship and hope against a backdrop of glowing interiors and landscapes.