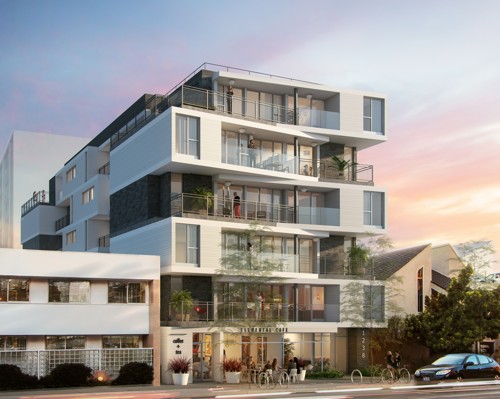 WS Communities (WSC) has filed its first full petition for one of the many projects that they proposed during the Builder’s Remedy period of open applications after nearly two months.

This is the fallout from the failure of the City of Santa Monica to complete an approved Housing Element for the state of California. Builder’s Remedy was a little-known statute that has become quite controversial in the wake of the rush of applications that were filed during this open period in Santa Monica. With Santa Monica’s strict zoning rules, developers have never had this type of a chance to secure approval for so many buildings that go against the local zoning ordinances, so they didn’t waste any time.

The application states that the building would be ten stories tall with 75 units at 1238 7th Street.

At this location, which is close to Christine Emerson Reed Park, one stipulation that the developer must adhere to is to reserve 20 percent of the apartments in the building for use as affordable housing to qualify for a Builder’s Remedy approved project. For this project, that means that 15 of the building’s apartments will be considered affordable units. The full proposal has added 5 units above the original application and Ottinger Architects will design the building for WSC.

Scott Walter, the CEO of WSC said, as quoted by The Real Deal.com, “Over the coming months they’ll all be in before the deadline. We’re working on all of them.” This statement shows that WSC is fully committed to fulfilling the application requirements and getting a full approval for all of the projects they submitted during the Builder’s Remedy period.

During the period when Builder’s Remedy projects could be filed, WSC submitted a total of 14 projects while the Santa Monica Housing Element was not in compliance. According to The Real Deal, WSC “listed three sites” but will continue to develop the remaining 11 projects as Walter has affirmed.