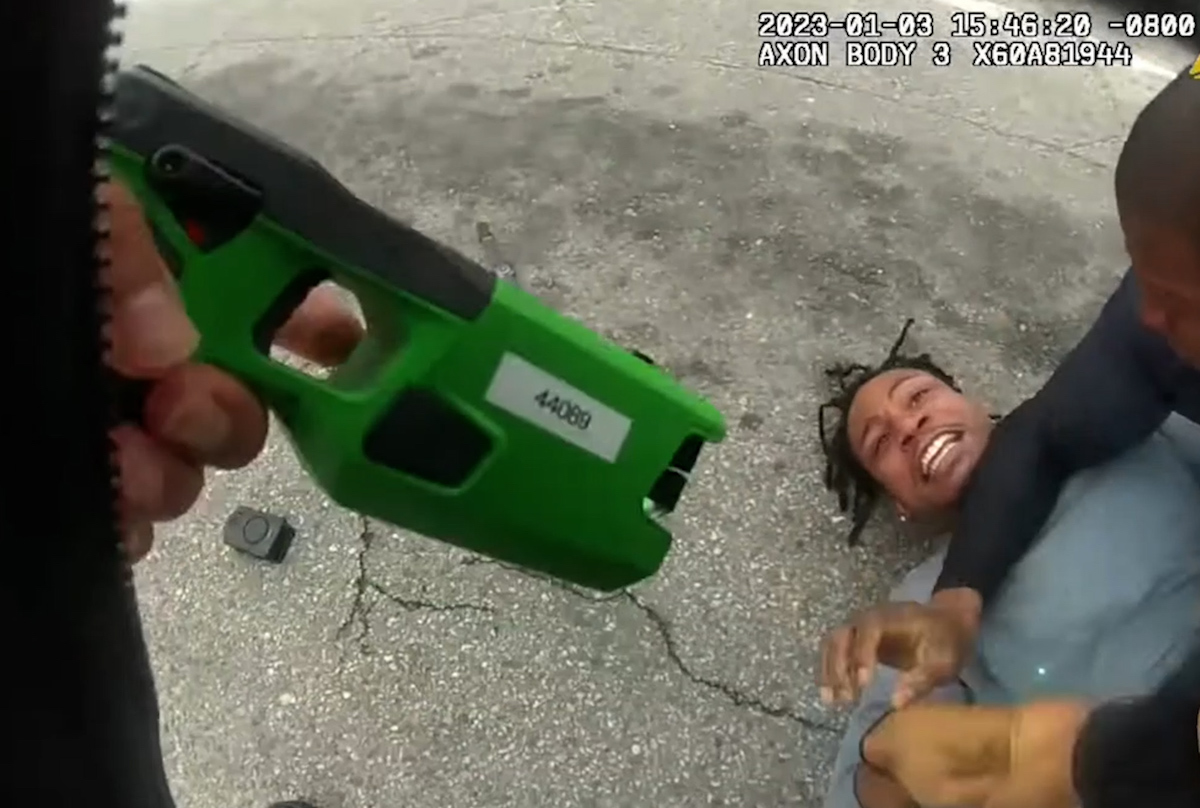 The Los Angeles Police Department (LAPD) has released body cam footage showing one of its officers repeatedly using a Taser on Keenan Anderson, the cousin of a Black Lives Matter co-founder. Anderson died hours later at a local hospital after suffering a medical emergency. Anderson’s death is one of three men to die after encounters with the LAPD during the first week of 2023, leading to calls for Chief Michael Moore to not seek another term.

Anderson, a 31-year-old high school teacher and father, was visiting LA visiting from Washington, D.C. He is the cousin of Black Lives Matter co-founder Patrisse Cullors.

According to the Los Angeles Police Department (LAPD), on January 3 an officer was flagged down a little after 3:30 p.m. in response to a traffic collision at the intersection of Venice Boulevard and Lincoln Boulevard.

“He observed a male, later identified as Keenan Anderson, running in the middle of the street and exhibiting erratic behavior. Several citizens involved in the traffic collision motioned to Anderson, indicating that he caused the accident. The officer contacted Anderson, verbalized with him, and requested additional units for a DUI investigation,” the LAPD said in a press release.

The LAPD reported that Anderson initially followed the officer’s commands and sat at the northeast corner of Venice and Lincoln boulevards for “several minutes” as the officer spoke with him.

“As additional units arrived at [the] scene, Anderson suddenly attempted to flee the location. Officers gave chase as Anderson ran eastbound in the middle of the street on Venice Boulevard. As officers contacted Anderson, he began to resist, resulting in a use of force. Officers struggled with Anderson for several minutes, utilizing a TASER, bodyweight, firm grips, and joint locks to overcome his resistance,” the LAPD said.

According to the LAPD, Anderson was “handcuffed and hobbled at the ankles” before being taken into custody. Los Angeles Fire Department (LAFD) personnel responded to the scene and rendered medical aid for injuries inflicted by the deployment. Anderson was transported by ambulance to a hospital in Santa Monica. While at the hospital, Anderson went into cardiac arrest and was pronounced dead.

Body camera footage shows Anderson being arrested by the officers, begging for his life while an officer pins him down in the middle of the road and demands Anderson get on his stomach.

An officer then can be heard saying “Stop or I’m going to Tase you,” threatening to use a Taser if Anderson does not get on his stomach. Then as one officer pins Anderson down on the ground with his elbow on Anderson’s throat, another officer uses a Taser on Anderson for an extended period.

Before another officer uses a Taser on Anderson for over around 30 seconds straight, as Anderson can again be heard saying that police are “trying to kill me.”

Anderson remained handcuffed in the middle of Venice Boulevard receiving medical assistance before an ambulance arrived and transported him to a local hospital where he died 4.5 hours later. According to the LAPD, Anderson “experienced a medical emergency, did not respond to lifesaving efforts by medical staff and was denounced deceased.”

LAPD Chief Moore released the footage showing Anderson’s death on Wednesday, while also releasing footage from the police encounters that led to the deaths of 45-year-old Takar Smith and 35-year-old Oscar Sanchez, both of whom were fatally shot by LAPD officers last week. Moore during a press conference said he was “deeply concerned” about these incidents. Moore added Anderson had committed a felony hit-and-run and tried to “get into another person’s car without their permission.” Moore told reporters Wednesday it was unclear what role the physical struggle and Taser use had in Anderson’s death. He claimed a preliminary blood test showed that cannabis and cocaine were in his system and that Anderson was in an “altered mental state.”  An independent toxicology test will be conducted by the LA County coroner’s office.

Los Angeles Mayor Karen Bass Wednesday issued a statement calling for all of the officers involved in these separate incidents to be placed on immediate leave.

“I have grave concerns about the deeply disturbing tapes that were released today. My heart goes out to the families and loved ones who are mourning the loss of Takar Smith, Keenan Anderson and Oscar Sanchez. Full investigations are underway, and I pledge that the City’s investigations into these deaths will be transparent and will reflect the values of Los Angeles. I will ensure that the City’s investigations will drive only toward truth and accountability. Furthermore, the officers involved must be placed on immediate leave,” Bass said. “Especially as a former health care professional, I am deeply troubled that mental health experts were not called in, even when there was a documented history of past mental health crisis. When there is no immediate risk to others, law enforcement must not be the first responder when someone is experiencing a mental health crisis. I believe officers and Angelenos agree on this.”

In the wake of Anderson’s death, Black Lives Matter co-founder Patrisse Cullors Cullors took to social media saying that Anderson was her cousin.

“This is my cousin Keenan Anderson. He was killed by LAPD in Venice on January 3rd, 2023. My cousin was an educator and worked with high school aged children. He was an English teacher,” reads the post, which shows Anderson with his son, who is now six.

“LAPD has killed three people this year. One of them is my family member. Keenan deserves to be alive right now, his child deserves to be raised by his father. Keenan we will fight for you and for all of our loved ones impacted by state violence,” the post continues.

Black Lives Matter’s Los Angeles chapter is calling for Mayor Bass not to reappoint Chief More to another term.

“Chief Moore has presided over the most murderous police department in the country. His list of failures is too long to capture in a set of ten slides. His audacity to go for a second term speaks to the system’s willingness to tolerate and even welcome racism and incompetence, all in service of the state’s deliberate agenda of containment, banishment, and extermination,” Black Lives Matter Los Angeles said in a social media post.

This weekend, the organization is holding a candlelight vigil for Anderson. It will take place on Saturday at 5 p.m. on the corner of Venice and Lincoln boulevards.

“Join the family and loved ones of Keenan Anderson as we lift his Spirit and generate the energy needed to fight for justice in his name,”  Black Lives Matter said. “This is a vigil, not a protest (yet). Please wear white, bring candles, flowers, prayers, and love. God help us.”