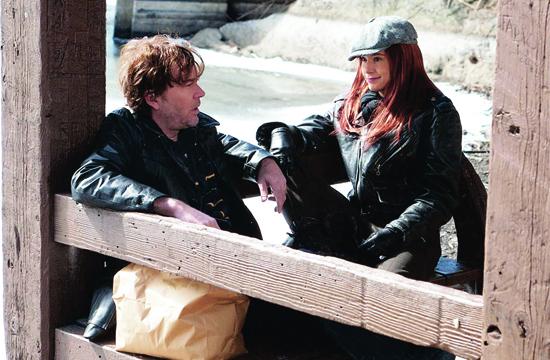 Mira Sorvino is “Paulie’s” daughter, one of Hollywood’s most famous “Mafioso” actors, Paul Sorvino. The acting apple doesn’t fall from the tree as Mira has carved out a successful, “non-Italiano” career, beginning with her award-winning role in Woody Allen’s Mighty Aphrodite for which she won an Oscar. Harvard educated, where she graduated Magna Cum Laude with a degree in Asian studies, she is Goodwill Ambassador for the United Nations to combat human trafficking. Her latest film, Multiple Sarcasms, which co-stars Timothy Hutton, Dana Delany, Mario Van Peebles, and Stockard Channing, is the story of Hutton’s character Gabriel, who is in the throes of a severe mid-life crisis, and its effect on family and friends.

Mirror: What’s the first thing you look for in a script and what attracted you to Multiple Sarcasms?

Sorvino: I have to like the character. I’ve never played a character I didn’t like and if I don’t like her, I alter things about her until I do. I really liked Cari (character in the film) and saw a chance to be spontaneous and fun and outspoken and honest.

Mirror: What was the hardest scene between you and Timothy?

Sorvino: The scene where he shows up drunk at my home to declare his love, was very emotional. She considers herself to be best friends to him, his wife, and daughter. She doesn’t consider him romantically, so when he drops this bombshell on her in the middle of the night, it’s very painful and makes her angry because he’s betrayed the unwritten rule of their friendship.

Sorvino: I think they work for a while as long as you’re single but I think it’s very difficult. Eventually one of you is going to have feelings and once they’re expressed, it messes up the friendship. I’ve had male friends in the past, but now my husband is my best friend. I think I would go crazy with jealousy if my husband had a best female friend because I want to be that girl.

Mirror: What’s the biggest challenge in juggling your career with three children and a husband?

Sorvino: Trying not to do damage to my family while still having some kind of career. I don’t aspire to a giant career right now because I don’t want to take the time away from the kids. When I was busiest, I worked all year long with only three weeks off. I’d been going from one country to another living in hotel rooms and I’m not willing to do that now. Kudos to those women who can pull it off, but I don’t want an army of nannies raising my kids. I don’t even have a full-time nanny right now. I should because I need one for moments like this. I had to call my trusted babysitter to watch the baby for three days and hoped that she’s available. My baby is playing in a park right now and we’ll rendezvous later for breast-feeding. It’s any working mother’s dilemma because it’s not possible to have it all because something will suffer – either your work or your children.

Sorvino: My mom was a stay-at-home mom who made these fantastic birthday parties, did creative things, taught us acting, and did volunteer work, all of which adds to my guilt. I sometimes think I should give it all up and be with them all the time. On the other side of the coin is my mother-in-law who was a Marine Corps Full Bird Colonel. She says that I shouldn’t have guilt and that I should work and the kids just have to get use to it.

Mirror: Do you think your famous dad had the same conflicts as you do?

Sorvino: Dad had more of the traditional male perspective in that it’s the man’s job to earn money for the family. After uprooting us for one semester to go to school in California, which I hated, my parents made a decision when I was in second grade that my mom would stay home in New Jersey while he went away to work on films and television shows because it was too disruptive to our schooling to take us with him. But when he was home, he was a great father and super involved in our lives. In retrospect, I actually question that decision because eventually my parents broke up and I feel that the time apart drove a wedge between them. It’s a hard call. Do you uproot everyone to keep the family together or do you go away for long stretches of time?

Mirror: What are your fears around your children?

Sorvino: I love my kids so much and I see them suffer when I go walk away and put them in someone else’s care. Also, I grapple with this feeling of loss because time is passing and they’re getting older and one day they’re going to be gone and they’re never going to call me or write. (laughs) But this is life. It moves at a breakneck pace and you just have to go along with it and treasure what you have in the moment.

Mirror: What makes being a mother so special for you?

Sorvino: Gosh, having my own kids who call me mommy. My son comes up to me several times a day and says ‘Mommy, I love you.’ My daughter attacks me with kisses. It melts my heart. I think it really worked out well for me that I had the big career first and could move into this second phase of my life, which I really enjoy.

Mirror: What are you working on now?

Sorvino: My father and I are planning to do a 19th Century adaption of King Lear together and that’s gearing up now.

In Part 2, Sorvino talks about her involvement as Goodwill Ambassador for the United Nations to combat human trafficking.