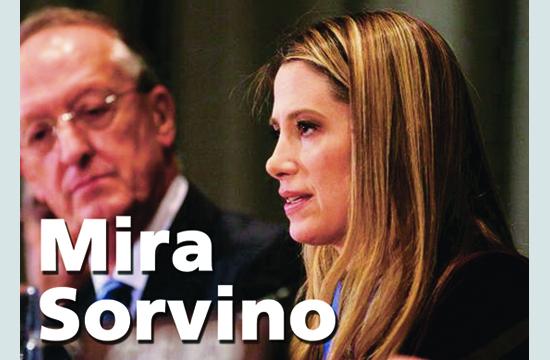 In Part 1 of the interview, which can be accessed at smmirror.com, Mira Sorvino discussed her latest film, Multiple Sarcasms, and a host of other topics, including her childhood, career challenges, her role as wife as mother of three children. In Part 2, Sorvino talks at length about her activism.

Mirror: Could you talk about your work as a human rights activist?

Sorvino: I was Amnesty International’s campaign spokesperson to “Stop Violence Against Women” for over two years and on the subject of trafficking, I am Goodwill Ambassador for the UN Office on Drugs and Crime ((UNODC).

Mirrror: What’s been your experience?

Sorvino: I just came back from Mexico for the kick-off the U.N.’s worldwide campaign to combat trafficking. The goal is to raise awareness and to get countries to commit to fighting this trafficking within their borders.**

Mirror: Can you talk about that trip?

Sorvino: It was a fascinating trip and I did a lot of public speaking. It’s a country where not much is known about trafficking, so I felt like I was able to be informative. The most important thing for me, by far, was going to go to a shelter for recently liberated girls, and I mean girls. I’ve met trafficking victims before, but they were all past 30. These were teenagers and children. I met a little girl who was eight years old who had been sold into a brothel when she was four. She was walking around with a big smile on her face showing everyone her arithmetic homework. When I saw her I thought ‘Oh God, please tell me she’s the daughter of someone here.’ She was a victim, just like all the other girls, but we should call them survivors. I felt like I wanted to adopt her, but I can’t adopt everyone who is needy. I just wanted to save her and protect her for the rest of her life so she would never undergo anything like what had happened to her. There is only one shelter in Mexico for girls like this and I got to meet thirty lucky survivors, but there are hundreds of thousands of girls exactly like them all over Mexico.

Mirror: What were you feeling during that visit?

Sorvino: Seeing a child like that and hearing some of the other stories, was a life-changing experience. They were horrendous and so graphic that I would not want to repeat them here. If any one of you heard these stories, you would be sick to your stomach. It affected me for two weeks and I had difficulty sleeping. We don’t have that sort of “cotton-picking slavery” anymore because enough of the population didn’t want to tolerate it, and hence the Civil War. It’s unbelievable that we’re living in a world today that puts up with this form of slavery.

Mirror: Do you have stats?

Sorvino: At least two million people a year are trafficked internationally, with hundreds of thousands of under-aged kids trafficked internally in the U.S. They are usually American citizens who are being used as child sex slaves and for worldwide pornography, 50 percent of which is produced here in the U.S. There needs to be much more of a firm commitment from every country, including our own, to explore every avenue to crack open the trafficking cases and to make it unprofitable for traffickers to operate in the trade of humans because for them it’s a business, and is the third largest profitable criminal activity, after drugs and arms. If it becomes too difficult for them to operate, if they’re indicted and imprisoned often enough, they’ll stop. But right now, it’s extremely easy and profitable for them to continue.

Mirror: How many cases are prosecuted in the U.S.?

Sorvino: We have only a 1 percent solve rate and have about same number of trafficking cases as murder cases. Can you imagine if we only solved 1 percent of the murder cases? So it means that we have intensify our efforts and raise public awareness, train the police, get the judiciary to be very well informed, and encourage everyone to become a watcher. It’s very subterranean and hard to find, but it’s always concerned citizens who call in with tips that break cases.

Mirror: How much of your time to you commit to this?

Sorvino: It takes a lot of my time, but I’m very serious about this and feel a personal responsibility, which is why I do lot of research and write my own speeches. I don’t want to be just another “talking head.” Back in college I wrote my thesis on the racial conflict in China so I really learned about prejudice and about ethnic conflict and the abuse of human rights, so I was prepared for that life. However, then I became an actress but now I’m getting to put that training into good use. It’s like I have a parallel life – I have my actress life and my advocacy work.

Mirror: Why are men attracted to these little girls?

Sorvino: The sexual drive in men is so strong that unless they are educated correctly throughout their formative years, once they are focused on a certain kind of sex object that they find stimulating, that’s going to continue to be stimulating for them. Every culture has always put a prize on virginity and youthful beauty so a child who hasn’t been “spoiled” by other people will always be more ideal to the “John” who wants to have something special. But, men need to be educated to the terrible sorrow that behavior is creating because many times the buyer of commercial sex is not really thinking about the individual, but just view it as a service. I think if you did sensitivity training for males worldwide, you might be able to discourage them from buying sex.

Mirror: We applaud you for doing this important work.

Sorvino: Thank you so much.

**Mexico’s President Calderón announced its version of the United Nations “Blue Heart” campaign against human trafficking. “It is an honor for Mexicans to be the first country on the American continent, and in the world, to join and launch this important prevention campaign…. We have to act now…and to put an end to inhuman practices which turn people into merchandise, because human beings are not and cannot be for sale.”