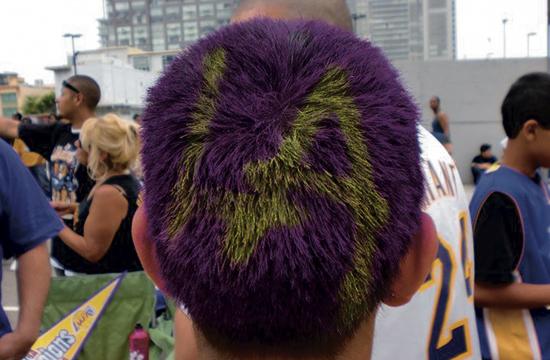 Between 500,000 to two million fans flocked to Downtown to catch a glimpse of the all-star team and take part in the celebration for the team’s back-to-back championship.

Fans went to great lengths to watch their beloved team, even if it was only for a few seconds – some climbed on top of empty buildings, cars, and rooftops, anything to catch a glimpse of Kobe Bryant’s smile, Pau Gasol’s hair, Derek Fisher’s friendly face, and the majestic championship trophy.

Most attendees, like Jade Walker, drove countless hours in traffic to reach the parade early. Walker, who is from Moreno Valley, said the long journey to Downtown and a 4 a.m. wake-up call was worth it.

“I can’t imagine being anywhere else right now,” she said. “This is what fans do.”

Some, like Jose and Mariela Gamarro, camped out with tents and blankets in the early morning to get the perfect spot.

“We wanted to be up front for the parade,” Jose said.

The couple and their two children, who were lying asleep on the ground, had been waiting since midnight.

Many fans proudly held up banners, posters and homemade signs, which entailed everything from declarations of love for players –“Sasha! I’m single and I love your eyebrows” – to praises for the MVP –“This is Kobe’s Town – Back to Back Without Shaq.”

Attendees flaunted their purple and gold pride in an array of creative ways. One man painted a Lakers jersey on his body; three eight-year-old boys sported “LA” spray paint on their heads; four people put Lakers gear on their dogs; another man spray painted his beard yellow and purple; one teenage boy wore a purple and gold Iron Man mask.

“We wanted to stand out today for the celebration,” Gonzalez said.

In the hours leading up to the parade, fans entertained themselves by napping, playing cards, chanting “Go Lakers!” / “**** Boston!” or doing the wave.

However, no parade is perfect. With the large amount of attendees, conflicts over space were common.

“I’ve been here since two!” yelled one fan to another fan who was trying to get to the very front of the parade.

To alleviate such congestion, which was also common in last year’s parade, players were on flat-board buses rather than buses and there was no rally at the Coliseum.

Police also took extra precautions at the parade because of the reported incidents of public assault, drunkenness, and vandalism outside Staples Center after the Lakers won the championship in game seven on June 17, LAPD officials said.

At about 7 a.m., 15 orange metro buses arrived by Staples Center, filled with police officers, who then patrolled the parade by foot, bike, car, Segway, and helicopter.

According to Wong, in 2000, the area around Staples Center was packed several rows deep with fans, where as this year, the crowd was more spread out and peaceful.

At about 11:30 a.m., a half hour after the scheduled starting time, the two-mile celebration began at Staples Center on Figueroa Street and ended at University of Southern California’s Galen Center on Jefferson Boulevard.

First came fire trucks carrying the Laker Girls, followed by trucks carrying famous Laker players from the past such as Earvin “Magic” Johnson and Kareem Abdul-Jabbar, and the team’s family members such as Lamar Odom’s wife, Khloe Kardashian.

Finally, the team arrived, with the championship trophy on board, smiling and waving goodbye to the crowd – until next season, that is. Did someone say “three-peat?”

By mirrormmg June 24, 2010
in Life and Arts, Sports
Related Posts