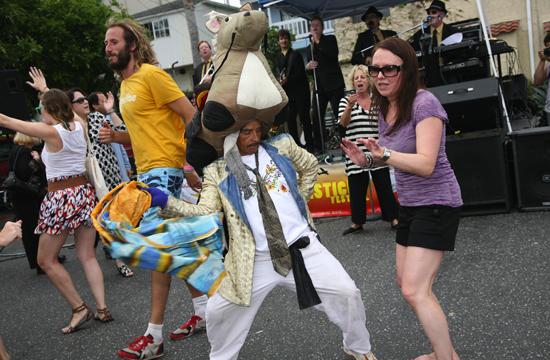 The tenth annual Main Street Summer SOULstice festival on June 27 took place under warm and sultry skies. Although it lacked a few features of past celebrations (a scavenger hunt with prizes from local businesses and free souvenirs or snacks), the streets were packed full or locals and tourists enjoying the festivities.

According to the organizers, money was tighter this year and the retail businesses along Main Street were hoping for as much revenue as they could make from the sidewalk sales that tempted customers with discounts on everything from swim trunks and summer dresses to candles and soap.

Beyond O 2, a purified water store, was experiencing its first Summer SOULstice. In front of the shop, Shay Bennett and Janet Campbell had set up a stand selling T-shirts for Campbell’s JC veteran’s organization. Campbell, explained Bennett, started her organization at the same time that Beyond O 2 owner LaJoy Farr opened her store, so the two were coordinating their promotions and were very excited to be at Summer SOULstice.

Further down the street at the Edgemar Center, artist Petra Eiko’s “What is In Your Heart?” project involved having people write and draw depictions of what they believed was in their hearts. The pictures, which Eiko hopes to publish in book form, were hung over the windows of the Piero hair salon, which had partnered with Eiko on this project.

But don’t forget all the music. The six stages, located on or just off Main Street, were the main draw, with an assortment of bands and solo artists playing both classic and contemporary music.

At the First Federal parking lot, The Bonedaddies kicked off the afternoon at 1 p.m. with a long set of their mix of Caribbean, Latin, jazz, and R & B music. The Bonedaddies have been playing in Los Angeles since the 1970s and according to First Federal stage manager Eric Ahlberg, the band’s conga and talking drum player, Mike Tempo, can often be heard sitting in with bands at Venice’s Talking Stick coffee house.

At the Pier Avenue stage, Cubensis played Grateful Dead covers, while vendors sold tie-dyed T-shirts and incense. There was more 1960s atmosphere nearby at the Kinney Stage, with Woodstock, a cover band that played songs by Woodstock performers (a female singer belted out Janis Joplin’s “Piece of My Heart”) and other songs by artists of the ‘60s.

On the Heritage Square Museum lawn, designated the “Americana Stage,” some of the performers did their own music, such as singer-songwriter Michael Doman, armed with only an acoustic guitar and a strong singing voice.

The Elias Stage, at the corner of Main and Strand Streets, featured “Musics of the World” and at one point, as singer Lisbeth Scott performed her spiritual music, a young woman could be seen in front of the stage, sitting on a mat in a difficult Yoga pose.

By 4:30 p.m., people flocked to Edgemar to hear a tribute band that was playing its third year at SOULstice—for good reason. Dr. Wu, a ten-piece ensemble that plays Steely Dan covers, cooked even hotter than the weather. More than 150 people grooved along to the band’s lightning-fast guitar player (who added a few tricks of his own to the Steely Dan guitar runs).

By 7.p.m. the evening fog had rolled in and it was all over—until next year, when maybe, just maybe, the scavenger hunt will return.

By mirrormmg June 28, 2010
in Life and Arts
Related Posts