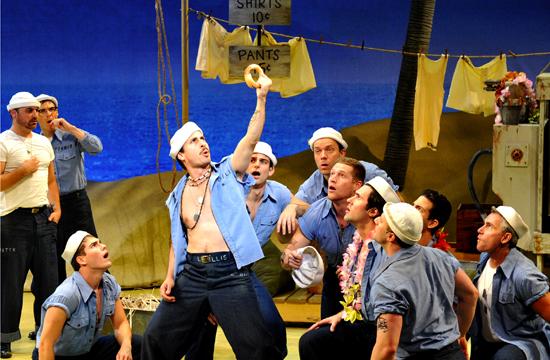 If opera singer Rod Gilfry’s booming baritone is the best thing about a thoroughly charming production of “South Pacific” at the Ahmanson, Carmen Cusack’s sprightly rendering of a Southern girl far from home is a close second. The Lincoln Center Theater production of Rodgers & Hammerstein’s “South Pacific” is a nearly flawless piece of musical theatre, an old gem of a WW II tale that transports audiences to two islands in the South Pacific where sailors and soldiers mingle with plantation owners and natives, creating a cauldron of global identities that boils over amidst racial strife and the ‘Us and Them’ mentality of war.

But before things heat up in the hatred department, a sweet romance unfolds. The dashing, middle-aged Frenchman, Emile de Becque (Gilfry), is thoroughly enchanted by the fresh-faced Ensign Nellie Forbush (Cusack), a small town gal from Arkansas.

Crooning his way into Nellie’s heart, Emile professes his love in several reprises of the show’s most famous tune, “Some Enchanted Evening,” while Nellie takes her turn at revealing character in the ‘aw shucks’ autobiographical number “A Cockeyed Optimist.” Though Emile reveals a seemingly sinister fact about his past, wide-eyed Nellie isn’t shaken by the details, choosing to remain in the lovestruck present, standing by her island-dwelling man. That is, until she finds out he was formerly married to a Polynesian woman, a dark-skinned local who bore his two children. This interracial romance is too much for our little Southern belle to handle, thus the love begins to crumble.

Mirroring Nellie and Emile’s struggle is the relationship between Emile and Lt. Joseph Cable (Anderson Davis) a manly marine sent to the South Pacific to advance the war by tapping into the geographical acumen of Emile. As Cable and his commanding officers try to persuade the sophisticated protagonist to help them set up operations on a nearby island, our young marine inadvertently falls in love with Liat (Sumie Maeda), an islander he can’t marry for shame. Initially choosing his love for Nellie over participation in covert war operations, Emile eventually joins Cable in his quest to “beat the Japs” when Nellie rejects him.

As the parallel love stories ebb and flow, there is much carousing on other parts of the island. The instigator is Seabee Luther Billis (a fully present Matthew Saldivar), a tattooed sailor who laments a lack of female company in a lively rendition of “There is Nothin’ Like a Dame.” His friend and Liat’s mother, Bloody Mary (an adept Keala Settle, who plays comedy and tragedy with equal skill), is largely a symbolic character, a native whose home and family are wildly disrespected by strangers.

By mirrormmg June 17, 2010
in Life and Arts
Related Posts