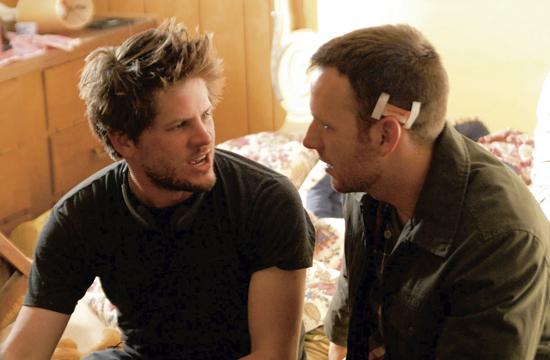 As a graduate from University of Southern California’s School of Cinematic Arts, Ryan Piers Williams is no stranger to the world of cinema, having worked on the technical end of the movies Oceans 12 and Oceans 13, Goodnight and Good Luck and The Good German, as well as having written and directed more than 10 short films.

All this may have prepared him for The Dry Land, his first major writing and directing project, which is a compelling film about the psychological fallout of a vet, returning from the Iraq war. Ryan O’Nan is basically an unknown with mostly television credits in his relatively short career. But watch out. This young actor, who makes his break-out debut in The Dry Land, is an exploding star whose remarkable performance as the tormented vet should earn him an Oscar bid.

Mirror: When you visited Iraq, you certainly saw the reality of the war versus the dramatized version. What kind of reaction did you get from the troops?

Williams: It was incredible. There were some guys who came up to me to tell me that they had PTSD and wanted to see our film. What was interesting was just being there and meeting soldiers and hearing their stories and sharing in their experiences. It really completed our journey with this film by allowing us to be in their world for just a few days. It was quite intense and gave us a much deeper perspective of what they’re going through. It’s 125 degrees and you’re wearing flap jackets and carrying all this heavy gear.

O’Nan: It was humbling being over there. It was interesting to learn that they watch all the movies dealing with their experience. We didn’t show our movie to them but there was this feeling that they wanted to know how they were being portrayed.

Mirror: Did you actually screen the film for any troops?

O’Nan: We screened it at Fort Carson in Colorado Springs for about 500 people, including active soldiers, veterans, and their families. That screening was unbelievable. Afterwards we had the most emotional reactions to how it connected to their lives. One guy stood up and said that he hadn’t shared this before, but when he came home from Afghanistan, he got treatment for his mental health and encouraged anyone who needed help to do the same thing.

That was incredible because I don’t think he would have said anything if it weren’t for seeing the film. One of the psychologists said that the more soldiers feel connected to a community, the least likely they will at times of psychological trouble, act out against the community. It’s our hope that the more communities understand what returning vets are going through, the more patient and supportive they’ll be.

Mirror: What drew you to the script?

O’Nan: What I loved about this script from the very beginning is that it doesn’t have a political agenda. It’s not trying to shove anything down your throat. It’s just the story of one guy coming back home and it’s not saying that this is how everyone comes back. It’s just one guy’s journey and the film is an attempt to start a conversation and make our troops feel a little less alone. I feel that was a big purpose for our journey over there – to say thank you and to say we haven’t forgotten you.

Mirror: Did you notice a change in your behavior during the filming?

O’Nan: You mean did I get lost in the character?

O’Nan: Anything like that is going to affect you. There’s no way around it – especially if you pour yourself into the role. But I was surrounded by the most amazing people I’ve ever worked with, so I didn’t completely disappear. We are so passionate about this subject that we would shoot scenes and then talk about them. We would have fun with each other in between takes and then pour ourselves into the next scene. So, because of having each other’s backs and mutual support as we went through this, we walked out the other side saying that we would do it again. It wasn’t like something lingered in an awful way for me.

Mirror: Why did you make the decision to not make any political statements?

Williams: I have my own political beliefs about the war, but I think what is important about this film is that there is no political agenda. I wanted to portray this one character and allow the audience to go through his journey and to feel his emotions and experience, even if it was just a fraction of a percent of what he might be going through.

Mirror: What would you like audiences to take away with them?

Williams: At the end of the movie, hopefully people will get a deeper understand of what he and his wife [played by America Ferrera] might be experiencing. To be successful with that, it takes a willing audience to jump on that ride and that’s what I hope we find.

More so than being political, it’s important to recognize that we’re already in Iraq and Afghanistan and can’t change that fact right now. What we can do is think about how we’re going to treat our soldiers when they come home and to understand their struggle and to understand as a society we need to take care of them and to be sensitive to their journey.

Ultimately, any movie that deals with the war is going to have some political ideas in it, but for me it was more important to be as accurate and authentic to this one man’s journey as I possibly could be, with the hopes of reaching the widest audience. At the end of the day, it’s a coming home story about reconnecting with the ones you love and how people come together to try to rebuild their lives.

Mirror: Given that independent films do not have huge budgets, you made a decision to put your cast through realistic military training. How important was that to the film?

Williams: The way I looked at it was that none of us had served in the military and how do we bridge that gap? I spent two years researching the material to understand what it was like for people coming home, not even with the idea of making a movie, but after a few years, I realized that I had a whole story that I needed to tell.

When I started making the film, I had to figure out how to get each actor to connect with this. Of course, they would do their own character work, but I wanted to help by making them understand what it was like to be a soldier. Even training for two days would give them a glimpse into that world. We spent the night in barracks in Albuquerque, went on training exercises, and carried guns, and even though they were mock battles, it was intense and felt like we were in a war.

O’Nan: People asked me about that experience. We were embedded in this National Guard group who were about to go to Afghanistan and these were these final war games. We were in Humvees and there were buildings and brush all around us. Even though it was a training exercise, we all had that sense of tension and knew that if we failed, it could cost someone’s life, not to mention your own. Ultimately, we found out that if was a real battle, we would have all been killed.

Mirror: Given your special relationship with America, were there any special challenges in shooting those intense love scenes?

Williams: Ryan and I worked together for a year before we started shooting and became really close friends. All of us created a very strong bond and a trusting circle. So for us, it was always about the movie so it never felt awkward. But don’t get me wrong. It was very intense, but this was a real moment we were capturing and it had to be raw as that was the only way it was going to work on screen. So you get out of your own way and just do it and move on.

O’Nan: It seems like it would be awkward, but we shot it a couple of takes and then moved on to the next scene.

Mirror: How much direction did you given in character development?

Williams: Ryan and I worked for a year and talked so much about the character. We went though every scene and discussed every aspect of the character so it was a very intense collaboration.

Mirror: Why did you decide to not have any battlefield flashbacks?

Williams: There are a couple of reasons why. I feel that this movie tracks James in a very present kind of a way so the last thing I wanted to do was to take you into a past moment. But also, we’re so desensitized to war scenes that I think not showing them is actually more powerful than showing them. It’s kind of like the “Jaws” effect. You don’t want to see the shark because it scarier not seeing it. Also, there’s the fact that James can’t remember what happened so as a filmmaker, I’m not going to show you what happened if the character has no recollection of what happened. We were piecing together the puzzle as he was piecing it together.

Mirror: Where did you train?

O’Nan: Mason School of the Arts at Rutgers University and before that the Mason College Theatre Company with Ron Castro, an amazing teacher who really changed my life. My training was based on the Meisner technique. I also trained for a year at the Globe Theatre in London.

Mirror: The work in the film is just brilliant and I’m telling both of you to get your tuxedos ready.

By mirrormmg July 30, 2010
in Life and Arts
Related Posts