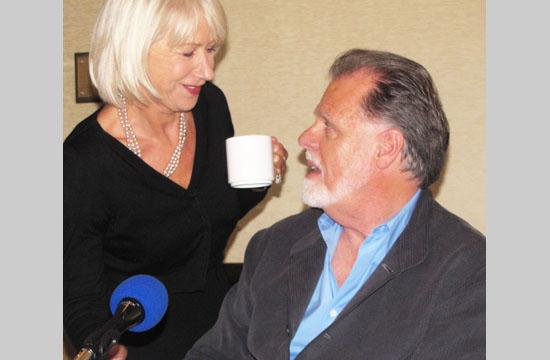 Taylor Hackford has directed some of Hollywood’s most outstanding films including The Devil’s Advocate, An Officer and a Gentleman, White Nights, Dolores Claiborne, and Proof of Life. He is married to Helen Mirren who co-stars with Joe Pesci as Grace and Charlie Bontempo in Love Ranch, loosely based on the famous Mustang Ranch, the first legalized brothel in Nevada. The film has met with mostly negative reviews and despite Mirren’s valiant effort, will probably not go down as one of their finest pieces of work. The following interview has been edited for print purposes.

Mirror: Did you give Helen a lot of character direction?

Hackford: The hard thing is you have this classy broad who played the queen and has done Shakespeare and everybody knows her as this classical actress. I was very tough on her because I told her she had to be this working class woman. By the way, Helen is from east London where her father was a taxi driver, so she came out of a working class family.

Mirror: What was the genesis of the script?

Hackford: Mark Jacobson is an old friend of mine who writes for New York magazine. He called me to tell me that he wrote this script and wanted me to take a look at it. I thought the character of Grace would be a great role for Helen. Her first reaction was did I want to make her a madam in a brothel? After she warmed to the idea, I immediately partnered with Mark and we worked on the script together.

Mirror: Were there any special challenges in working with your wife?

Hackford: We are very comfortable with each other and didn’t have to define our roles. She was off with the actors and I was the director. It would not be good for the rest of the cast if the director’s wife was near the director’s chair and they might think that we were discussing their performances. She knew what she had to do and that she had to bond with the cast members. It’s great to work with your wife because when you go home, she knows what went on that day.

Mirror: What is the main different between directors and actors?

Hackford: Directors are result oriented. Give us a release date and a budget and we get it done. Actors are process oriented. They’ve got to get to the base of the character and they don’t care how long it takes. The director says ‘hey we have to shoot this scene now and it can’t wait until tomorrow.’

Mirror: Can you give an example?

Hackford: In this film I’m asking my wife to look haggard in the beginning because the character is a cynical, tough, tired professional who has just been given very bad news about her health. She has no romantic illusions left and knows her husband (Joe Pesci) is a philanderer who samples the product.

Mirror: It must have been difficult to make Helen look worn out.

Hackford: Sometimes life is fortuitous. Helen just came from shooting another movie and showed up sick with the flu. The first scene we’re shooting was the exterior shot where she goes out to see the boxer Armando Bruza. (Sergio Peris-Mencheta). It had snowed the night before and was below freezing. It’s a horrible situation, but I have to shoot the scene. I can’t say to my wife, ‘It’s o.k. baby, you don’t have to work today, I’ll shoot something else.’ I said you gotta’ suck it up and get out there, and she did.

Mirror: In the evening were you her cuddly husband?

Hackford: Of course we slept together every night, but I was usually dead tired and not a great companion. We did have Sundays off and would drive around New Mexico.

Mirror: What was the most difficult scene to shoot?

Hackford: The most difficult scene was the boxing. I’m a life-long fight fan and love the sport. I know what great boxing is and when you’ve got Scorsese’s Raging Bull, you have something to live up to. Women do not really like boxing and they don’t like to see that kind of brutality, but I had to do it even though I knew that it was not going to be well received by audiences. It was difficult to shoot and was difficult to keep in the movie because when we screened it, we received a lot of negative reaction to that scene especially from women.

Mirror: Were the sex scenes difficult for you to shoot?

Hackford: I have done a lot of love scenes in my films and hope you don’t look at any of them and think they’re gratuitous. Helen and I had discussed it and she knew this was a crucial scene that profoundly changes she and Armando. But, poor Sergio, he’s a lovely fellow but he’s a man and did have some difficulty at first. I told him he would not have a problem with Helen or me and that he had to make it real, and that if he didn’t, we’d be doing it all night and people would really get pissed.

Mirror: Could you comment on Helen’s recent nude photos in New York magazine?

Hackford: Helen has made a reputation of being very frank about her sexuality and nudity, which for Europeans is not exactly what it is for us here. We come from this Puritan ethic that says that sex, the most natural thing in the world, is bad, wrong, taboo, and you don’t deal with it. I faced this in An Officer and a Gentleman that was about two people who find each other sexually first, but ultimately fall in love. People were saying that I couldn’t make that kind of a film. Anyway, I knew that she did the photo shoot, but she didn’t tell me anything about it so I was surprised. Helen bonded with the photographer and what she did was her choice and I have no problem with it.

Mirror: Thanks so much for an interesting interview.

By mirrormmg July 9, 2010
in Life and Arts
Related Posts