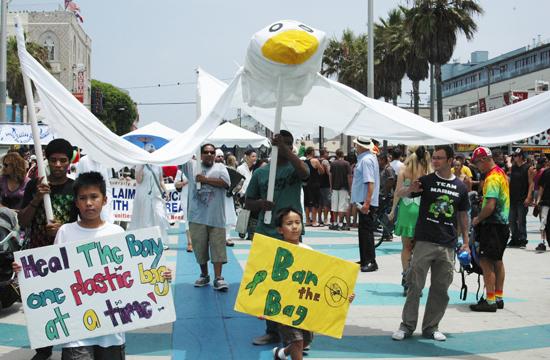 The Venice Eco-Fest featured more than 150 vendors at Ocean Front Walk and Windward immersing green practices with the plethora of boardwalk attractions. The all-day event presented by the Venice Chamber of Commerce and Earth Day LA, was highlighted by a main stage where musicians and speakers invited visitors to embrace unity and reduce wasteful living.

More than 25,000 people perused the event sampling coffee alternatives, petting rescued amphibians, or even cleaning their chakra. More than a few obtained reusable shopping bags given away by Bloomingdale’s, aptly named the “reusable brown bag.” The event incorporated the beach and felt like the boardwalk’s healthier cousin.

Actors Ed Begley Jr. and Amy Smart gathered a crowd around the solar-powered stage to share their personal connections to sustainably. Smart, a Topanga Canyon resident and active participant in nonprofits such as Heal the Bay for more than 15 years, said despite her busy schedule she always makes time for such an important cause.

Smart recently returned from New Orleans where oil is leaching into the coastal areas. She said it’s time to start promoting green energy, instead of just pointing blame at oil companies.

Growing up in the San Fernando Valley, Begley saw firsthand how “choking smog” that “seared your lungs” affected people all year. He has lived conscious for more than 40 years by driving electric cars since the 1970s and living in a self-sustaining home in Los Angeles powered by solar energy. Now he promotes eco-living and sustainability that he said starts with riding bikes, taking public transportation, and composting.

The goal of the event is not only to gather the community, but also encourage sustainable living and earth-conscious legislation.

Congresswoman Jane Harmon, a Venice resident, spoke about her ban on lead in light bulbs and the 100-watt incandescent light bulb.

At noon the “One Planet Parade,” joined by Councilman Bill Rosendahl, marched down Ocean Front walk led by a large goose display with elaborately dressed performers and children calling for a plastic bag ban in tow.

Nonprofits such as Heal the Bay, Ballona Institute, and the Surfrider Ocean Friendly Garden educated passerbys about keeping natural landscapes clean and respecting the area’s largest neighbor, the ocean.

The festival founder and producer Stephen Fiske said that humans have to adjust how we live on the planet by learning to live together and building a green economy. He started the festival in “forward thinking Venice” to raise awareness about eating organically and living sustainably all in an “entertaining package.” He warned that unless people learn to be stewards of the environment, otherwise the opportunity to live healthy will be severely compromised.

“It’s a biological fact that an organism cannot survive in it’s own waste,” he said. “There is a certain point in where the pollutant overcomes the life form and we are in danger.”

By mirrormmg July 10, 2010
in Life and Arts
Related Posts