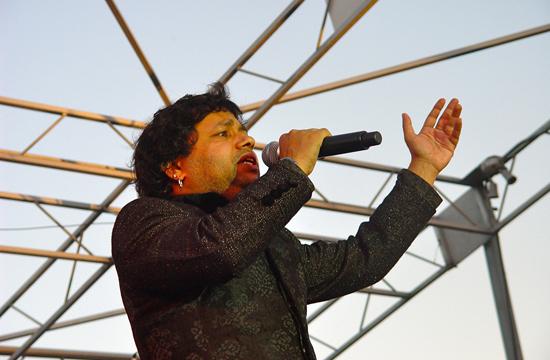 On Thursday, musician and Indian icon Kailash Kher brought Bollywood to Santa Monica at the fourth concert in this summer’s Twilight Dance Series.

Kher, who is as a household name in India, is most known for his pop-rock Bollywood jams and strong folk songs.

Prior to the performance, Globesonic DJ Fabian entertained the crowd with remixed Indian tunes.

“I’ve been trying to keep the vibes chill until Kailash Kher comes on,” he said. “So make some new friends and send the vibes outward.”

After DJ Fabian got the crowd pumped, KCRW’s Francis Andertin, MC of the night, introduced Kher to the crowd as one of India’s most amazing musicians.

“It’s so exciting to have him here,” she said. “He flew in five hours ago just for the show.”

At about 7:45 p.m., Kher’s band began playing traditional Indian instruments and guitar, but Kher was not yet on stage.

Five minutes later, a faint note echoed from behind stage, but still no Kher – until, finally, at 8 p.m., Kher jumped on stage singing and the crowd cheered for his grand entrance.

“We’ve done a lot of concerts recently but this one will be the most memorable because we got visas yesterday and went from the airport to sound check today!” Kher said to the crowd after singing the first song of the night.

Although Kher’s Kailasa was the only main artist of the evening, he did not disappoint. Fans were dancing, clapping and singing along (if they knew the words in Hindu) to Kher’s tunes the entire night.

“We hope you guys have fun tonight,” Kher said.

“We will!” an audience member yelled back.

Kher was lively throughout his entire set and showed his enthusiasm for singing at “such a beautiful venue.”

“I feel like I can roam around freely,” he said, about the Pier and beach atmosphere.

Kher surprised the crowd in his third number by inviting one “beautiful girl” on stage to dance, a tradition, he said, for this song because it is a sufi song, which is more mystical.

“It’s all about love but it’s very spiritual,” he said. “The songs are basically love songs with very deep meanings – this is for all the lovers or people who believe in love.”

The lucky girl was Claudia, who joined Kher on stage for the sufi.

The sufi was also special, Kher said, because he mixed different dialects from India and combined them for his lyrics.

People continued dancing, even during intermission, keeping the Bollywood vibes going all night.

However, at one point, the crowd got almost a little too rowdy – with some fans trying to hop over the gate to the front of the stage in hopes of getting closer to Kher.

Fans were happy to see Kher, especially because his popularity continues to grow in India.

“We love everything about him,” said Shristie Nair, who came with about ten of her friends and family. “His music is amazing and cool.”

Nair, who is of Indian decent, said Kher is the ultimate celebrity in India.

But even those who didn’t know anything about Kher or Bollywood enjoyed the performance.

“We don’t know the artist we just thought it would be really fun to come and dance,” said Lena Staab of Germany, who is vacationing in Santa Monica for the summer.

By mirrormmg July 31, 2010
in Life and Arts
Related Posts